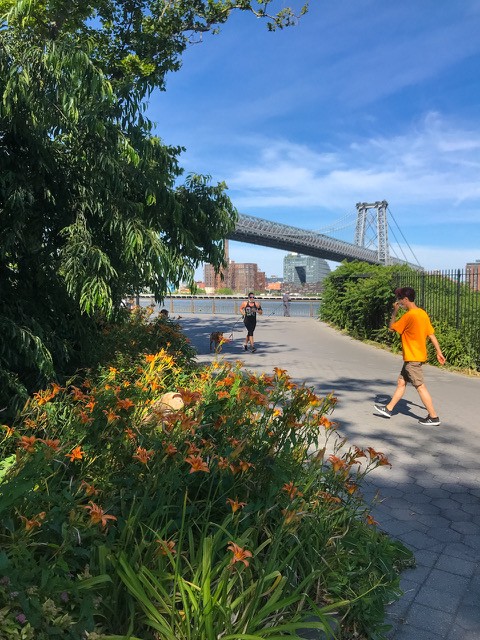 The 1.2-mile-long East River Park promenade on either side of the base of the Williamsburg Bridge was much used. (Photo by Pat Arnow)

Opinion: Carlina Rivera… A view from the Lower East Side of a District 10 candidate

BY PAT ARNOW | Want to know how District 10 Congressional candidate Carlina Rivera would govern? Check out two ways this city councilmember has affected the Lower East Side, Chinatown and East Village neighborhoods:

East River Park was a much-used 1.2-mile-long waterfront oasis in a densely populated, modest part of Manhattan. Now most of the park is a vast dirt pile, demolished for an ill-advised flood-control project that will put a massive levee along the river.

Carlina Rivera pushed through the plan’s approval in the City Council despite widespread and sustained community opposition. Rivera ignored alternative solutions. Now that the project is underway, she has failed to demand meaningful oversight or accountability from the contractors or the city.

There were other plans

City agencies and community residents spent years planning a floodable, resilient park with berms that would be added along the F.D.R. Drive to protect the neighborhood from storm surges and sea level rise due to climate change. Covering the F.D.R. was a popular concept that would add parkland and stem carbon emissions. Many of the 1,000 mature trees, much of the still-new riverfront promenade and the running track, playing fields and picnic areas would have been preserved.

In 2018, under Mayor Bill de Blasio, the city scrapped the plans and unveiled a new staggeringly destructive and double the cost (increased to $1.45 billion) East Side Coastal Resiliency project a.k.a E.S.C.R.

Not one environmental or climate scientist was involved, not one elected representative, not one person from the neighborhood.

Thousands protested this environmental catastrophe. Like many of our neighbors, I jumped into organizing in order to persuade the city to review and revise E.S.C.R.

We learned about the science and technology of coastal resiliency in order to testify knowledgeably at hearings. We pointed out the health consequences of cutting down 1,000 mature trees that cleanse and cool the air. We proposed reviews with experts. We held rallies and delivered thousands of hand-signed petitions.

Rivera and her staff batted away all informed and sincere objections.

We asked to see the Value Engineering Study that was used to justify this massive project. City officials, including Carlina Rivera, denied its existence. It does exist — thank you, Freedom of Information Act and lawsuits. The report presented alternatives!

Did Rivera really believe there was no study? Did she mislead us or was she misled? Either way, she doesn’t look wise.

The park is in Carlina Rivera’s district. If she had objected to the plan, it would have had to be revised. “Member deference” is the unwritten rule in the City Council. If the local representative supports a measure, it will pass. If she doesn’t, it almost never does.

In November 2019, with her full endorsement, the City Council voted for the E.S.C.R.

Her district is uglier and less livable than when she came into office four years ago. The 1,800 saplings promised in the new park that will be built on top of the levee years from now will not make up for an entire generation of local residents being deprived of park space that we all need for our physical and mental health.

Losing our park unnecessarily is not the only reason to beware of this candidate.

Look at Carlina Rivera’s non-answer to a District 10 candidate questionnaire: Would she take real estate donations? Her response: “I have committed to vetting individuals and have pledged to not take fossil fuel, defense company or pharmaceutical monies.”

In fact, she has taken large donations from big developers. She promotes real estate interests, no matter how it affects the neighborhood. When she took office, for support of the controversial Tech Hub in Union Square in her district, she asked for promises of limited development elsewhere in the East Village. That didn’t happen, but she voted for the Tech Hub anyway.

Rivera has supported every citywide rezoning and nearly every out-of-scale development, no matter how much the communities object or how much it will lead to gentrification and displacement. Developers can build ugly high-rises for the rich with a few somewhat-affordable units. And she supports the new high-rise jail that will further erode Chinatown’s already imperiled existence as a marvelously diverse and interesting but fragile neighborhood.

There is a diverse roster of candidates for District 10 that will serve us well. Say no to Carlina Rivera.

Arnow co-founded East River Park ACTION, a grassroots community group dedicated to finding more truly resilient solutions that would provide flood control for the Lower East Side and East Village. When the city started bulldozing the park in December 2021, she stopped that three-year effort. However, the organization continues its work with other activists in the neighborhood and beyond. Rivera’s candidacy galvanized Arnow into speaking out.

Correction: This column initially said that Councilmember Carlina Rivera supported the One Manhattan Square tower, which was developed by Extell, and also that she “supports the addition of three more supertall towers in that area.” However, One Manhattan Square was developed “as of right” — meaning no City Council approval was needed — and all the sites mentioned above are located in the Two Bridges area within Council District 1, which was represtented by Margaret Chin during the time the discussions and lawsuits around these projects were occurring.