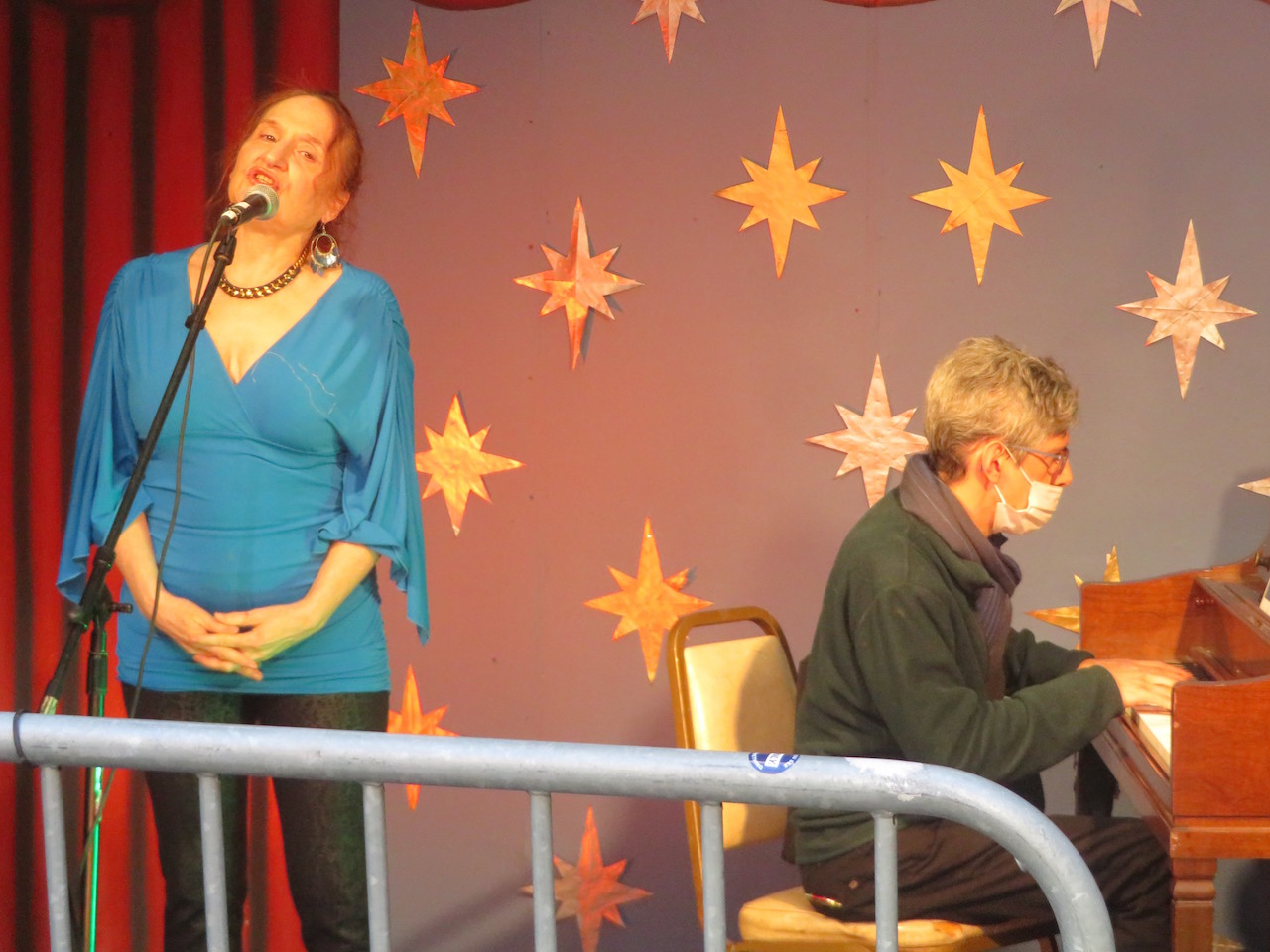 Not waiting for the de Blasio's administration's plan, the Theater for the New City, on First Ave. at 10th St., has been bringing its "Open ’Tho Shut" variety shows to the streets. Above, Amy Coleman sang standards accompanied by Peter Dizozza on Feb. 6. (Photo by Everynight Charley Crespo)

Open Culture program to kick off in March

Mayor de Blasio and Gonzalo Casals, the commissioner of the Department of Cultural Affairs, formally introduced Open Culture at an outdoor press conference on Feb. 8. Councilmember Jimmy Van Bramer, who introduced and co-sponsored the Open Culture bill as the chairperson of the City Council’s Cultural Affairs and Libraries Committee, also spoke at the press conference.

“Arts, culture and live events are the heart of New York City. Today, we’re bringing them back,” de Blasio declared. “From Open Streets, to Open Restaurants, to Open Culture, New York City has found creative and sustainable ways to connect New Yorkers to their neighborhoods while staying safe from COVID-19. I’m honored to support the cultural institutions who make our city great, and I can’t wait to see our creative community in action.”

“Open Culture is going to streamline the application process,” Van Bramer added, “allow arts groups, both for-profit and nonprofit, to get easily obtainable permits to perform live on the streets of all five boroughs of New York City, democratizing the arts in a way that we’ve never experienced before in our city. They’re going to be able to ticket [through] online ticketing and charge for performances, which will allow a source of revenue to be had by cultural organizations and allow our artists to be paid.”

The Mayor’s Office of Citywide Event Coordination and Management will review applications and expedite permits on a first-come, first-serve basis. Selected cultural organizations and community groups can apply starting on March 1. Unaffiliated individuals or groups who would like a permit should partner with a local cultural organization or community group. Applicants will pay a $20 fee for single-day permits. Interested applicants will also be required to submit a COVID-19 Safety Affirmation Plan.

Open Culture will continue through Oct. 31, 2021, with the possibility of extension until March 31, 2022. All approved events will be limited to a maximum of 12 hours. Setup and breakdown must occur within the allotted time frame. Events using amplified sound can begin at 9 a.m. and must end by 10 p.m.

The Open Culture guidelines can be accessed on the Web site of the Mayor’s Office of Citywide Event Coordination and Management at www1.nyc.gov/site/cecm/cultural-events/guidelines.page.

This past January, the Department of Transportation designated more than 100 short roadway sections as Open Culture street locations. The list has come under scrutiny by cultural organizations and community groups, who have noted that only 10 of the Open Culture locations are on existing Open Streets. Some organizations have complained that many of the assigned roadways do not connect with cultural institutions.