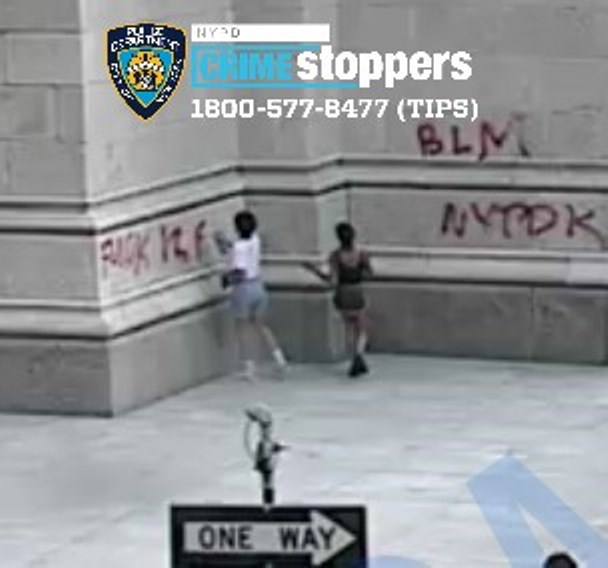 Police say they are looking for these two women for defacing St. Patrick's Cathedral. (Courtesy N.Y.P.D.)

They wrote “BLM,” “F—” and “NYPDK,” which apparently stands for “NYPD Killers.”

The graffiti, which was done around 5:15 p.m., reportedly happened when a protest march was passing the Midtown house of worship, the New York Post reported.

The two women fled down 51st St. toward Madison Ave.

One individual was described as wearing a dark-colored tank top and dark shorts while the second wore a white T-shirt and light-colored shorts.

The spray-painting pair are being sought for “criminal mischief.”

Anyone with information should call the New York Police Department’s Crime Stoppers Hotline at 1-800-577-TIPS (8477) or for Spanish, 1-888-57-PISTA (74782). Tips can also be submitted on the Crime Stoppers Web site at WWW.NYPDCRIMESTOPPERS.COM or on Twitter at @NYPDTips or by texting tips to 274637 (CRIMES) then enter TIP577.