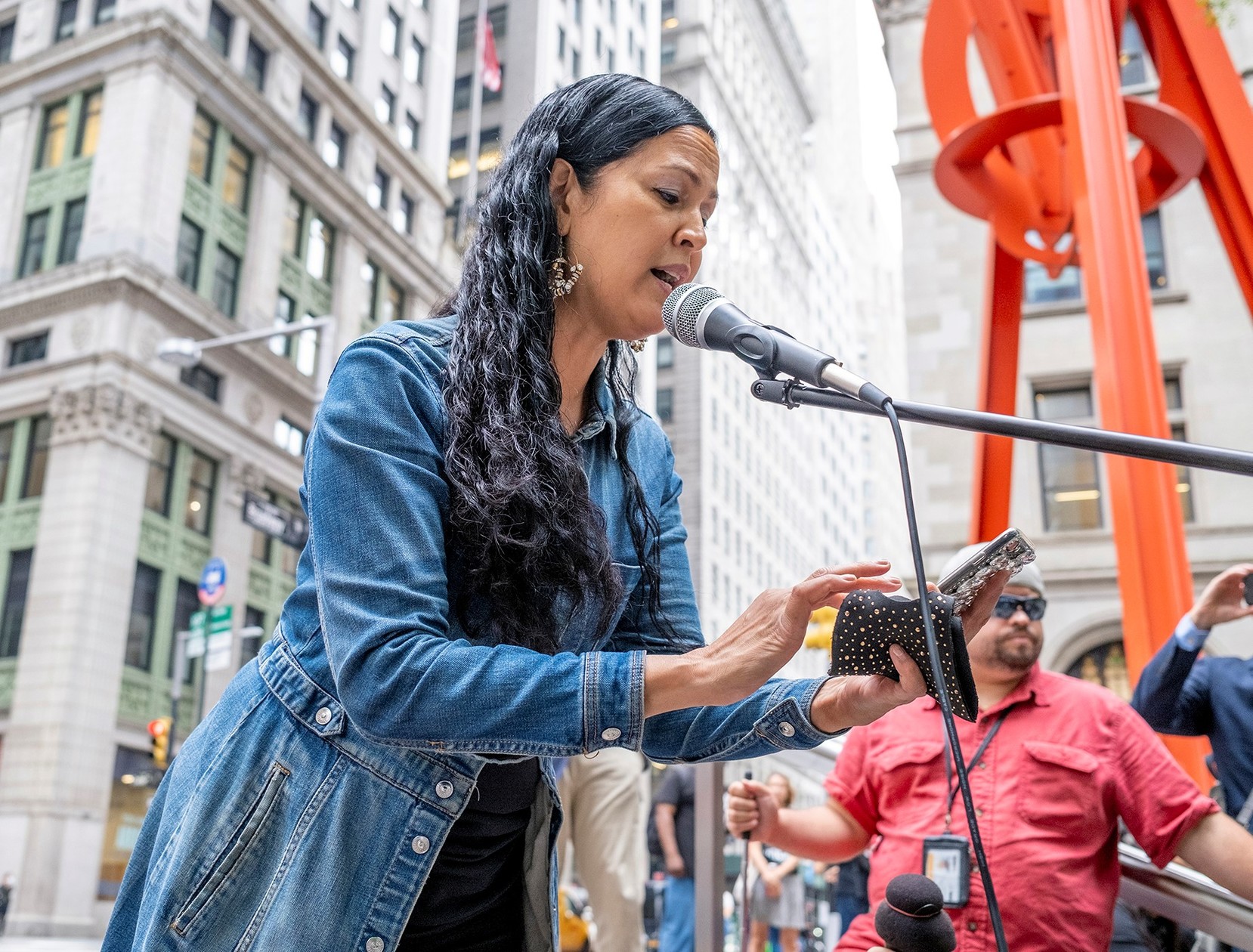 Occupy didn’t fail, and neither did I: Ten years later, I’m living proof of its long-term effects

BY MARNI HALASA | Every year on Sept. 17, I organize a press conference on the steps of Zuccotti Park for the anniversary of Occupy Wall Street. I invite the media, as well as activists, teachers, healthcare workers, artists and live-streamers, and bring original signage and installation art from 2011, in part for the sake of memory and nostalgia.

But beyond nostalgia, I’ve done this for the past nine years because I strongly believe that Occupy’s core spirit — a battle cry for genuine systemic change — should continue to be a central focus in activism today because, unfortunately, things have gotten worse for the 99 percent.

On Occupy’s 10th anniversary, many marvel how this fierce but short-lived movement, which was initially deemed “a failure,” ultimately pushed the Democratic Party left — percolating the right conditions so Bernie Sanders and his political revolution could walk through the door.

Decades of silence about income inequality by the neoliberal Democratic political class, the press and civil society were shattered, heralding a new awakening for the demands of regular people to live with dignity.

It was an exciting time because change seemed possible. Occupy normalized protest — inspiring thousands from all walks of life to take to the streets and push for an entirely different paradigm: breaking up the large banks and monopolies and demanding a livable wage, while also pushing for racial justice, police reform and, of course, exposing a rigged, democratic-in-name-only political system designed for the wealthy.

This is what Occupy succeeded at: catapulting these ideas into the national conversation. And for all its criticisms, no one could have predicted how this movement would resonate in the coming decade: Its spirit, carried forward through its alumni, launched progressive ideals — Medicare for All, the Green New Deal, debt-free college, a $15 wage, higher taxes on the wealthy— from the periphery into the mainstream.

The steam that Occupy lent to the Sanders campaigns would also provide the launch pad for Alexandria Ocasio-Cortez and a generation of new progressive lawmakers to get elected, as social movements influenced the outcomes of electoral campaigns.

But a decade later, have things truly changed for the better for the majority, especially in this city? According to the Center for New York City Affairs at The New School, the next mayor will have to address the fact that roughly one in five New Yorkers lives in poverty, and nearly half the city’s households are considered near-poor.

The research institute also states that employment data and the city’s food banks show that the number of working poor continues to rise, while our homeless population is 92,000 and keeps growing. And yes, some of this has been exacerbated by the pandemic, but when income inequality is on an upward trend under a Democratic City Council, mayor, governor — and, right now, Congress and president — something is definitely awry.

This is why I twice ran for City Council District 3 — to be an independent voice, outside the political system, guided by my own moral compass and a desire to see real, tangible change. Winning was always a long shot. But I threw my hat into the ring mainly to expose an entrenched apparatus of impotent policy and money-in-politics corruption that harms New Yorkers, like myself.

A small business owner of RedEye Coffee, a specialty coffee shop in Chelsea, we were forced to close because our landlord did everything but give us a fair lease upon renewal. In our particular case, that meant a 20 percent rent hike, paying the majority of utilities and an extortion fee of $25,000, as well as a lease for only six months, with a three-month security deposit that he would not keep in bank escrow, but “in his car or basement” if he so desired.

Occupy helped me see that legislation must have teeth. My run for office in 2017 pushed Councilmember Corey Johnson, who would become the Council’s speaker, to give the Small Business Jobs Survival Act a public hearing in 2018, since I exposed him as being beholden to big real estate. But I also revealed that he did absolutely nothing to stop the crisis of small business closures when he had the power to do so by bringing the S.B.J.S.A. for a full floor vote. (At the time, between 1,200 and 1,400 small businesses were closing, with 8,000 jobs lost per month, which was a devastating crisis, according to the Small Business Congress.)

But Speaker Johnson reneged on his promise to pass the S.B.J.S.A. and, even more astoundingly, did nothing of substance to aid the small business community during the pandemic. Passing the S.B.J.S.A. would have at least lessened the blow, allowing owners to renegotiate their leases. But even after it was projected, in August 2020, that one-third of the city’s small businesses might permanently close due to the pandemic, there was still no action on Johnson’s part, and the situation continues to this day.

My second run for City Council, this past year, challenging the status quo of the mainstream Democratic Party, was also Occupy-inspired. On numerous occasions, we members of Fight for NYCHA refused to side with elected officials like Corey Johnson, Jerry Nadler, Robert Jackson, Gale Brewer, Richard Gottfried, Brad Hoylman and Johnson’s former chief of staff and now-Councilmember-elect Erik Bottcher who bulldozed privatization — RAD and the Blueprint — through the New York City Housing Authority’s Robert Fulton and Chelsea-Elliott Houses, against the tenants’ wishes. This happened during the secretive Mayor’s NYCHA Working Group, which violated the state’s Open Meetings Law for months. We were also part of a startling victory with the Residents to Protect Public Housing and other advocacy groups to push Senator Brian Kavanagh to pause the Blueprint, a dangerous privatization scheme that could end public housing as we know it and turn over NYCHA buildings to private developers.

I didn’t win the election, but just like Occupy left its effects, our one-on-one advocacy affected people’s lives. We helped a disabled senior at Chelsea-Elliott Houses get a motorized wheelchair after she had been waiting for eight months. We gave jobs to the unemployed, while helping others get unemployment. We were also very proud to organize protests with homeless New Yorkers to stop the city from moving them from hotels in Hell’s Kitchen to the congregate shelters, when many people were legally entitled to their own private room due to medical reasons. This was life-changing for many who did not want to return to live in a barracks-style shelter amongst a population that had only a 14 percent vaccination rate.

This is my own story but, nevertheless, an Occupy journey through a lens of local electoral politics. You may not win, but that doesn’t mean that you can’t make a real difference in people’s lives, by simply telling the truth and advocating for what human beings deserve — which is to live in genuine dignity. And by doing so, you can shift the conversation, which then will take on a life of its own and spread like wildfire — changing outdated standards about the role of government and how it should be used to help elevate the 99 percent of New Yorkers to have a better life.

If that’s not a political win, I don’t know what is.

Halasa ran for City Council District 3 as a Democrat in 2021 and as an independent (Eco Justice Party) in 2017. She is an activist and ice-skating instructor living near Hudson Yards.