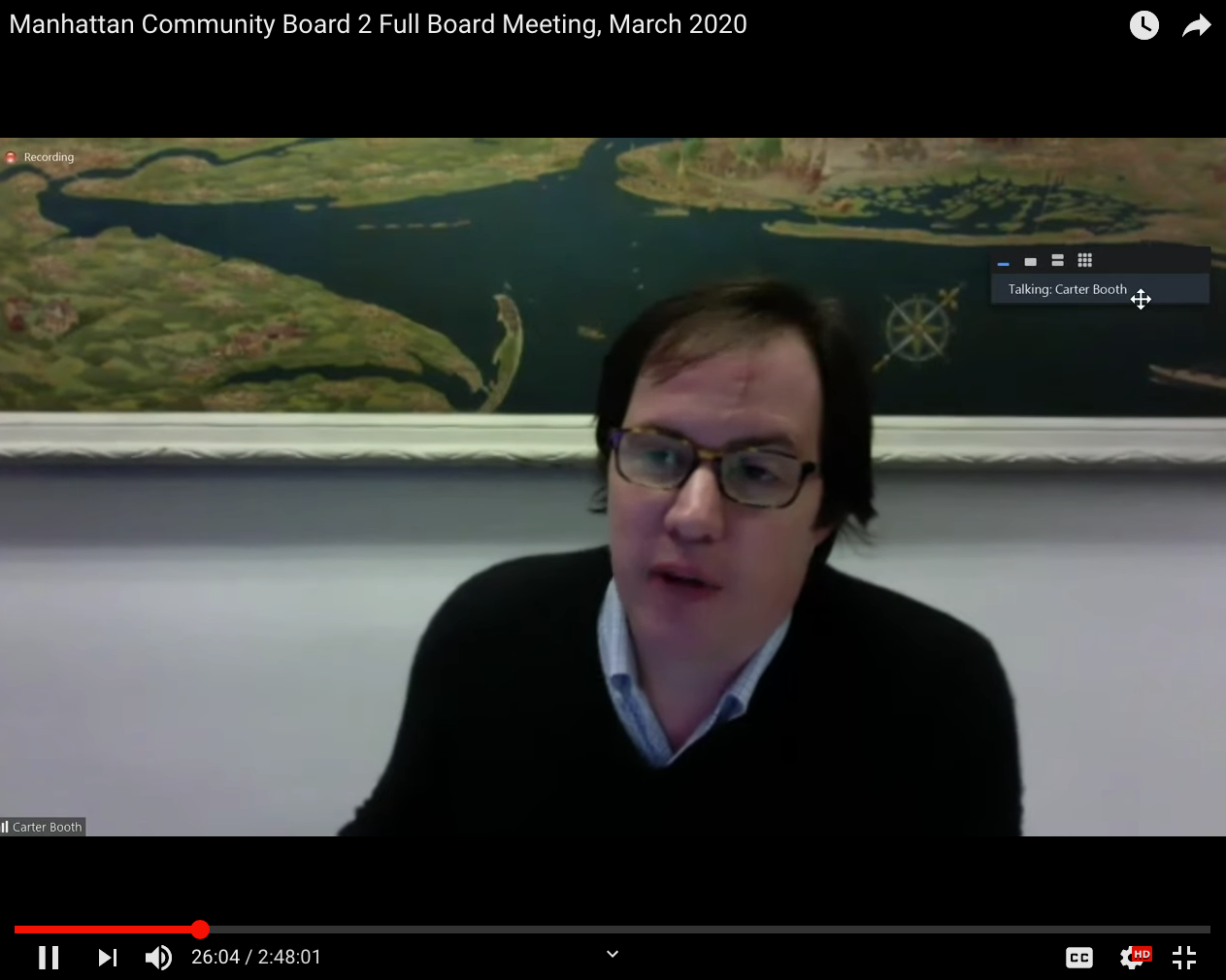 BY THE VILLAGE SUN | Not letting coronavirus sidetrack it from its duties, Community Board 2 held its March full-board meeting last week by video conference call.

The volunteer-member board — which covers the area between 14th and Canal Sts. west of Fourth Ave./Bowery — connected through Google Zoom.

Carter Booth, the board’s chairperson, was a natural running the March 19 meeting remotely. He was in the C.B. 2 meeting room, while the board’s district manager, Bob Gormley, was nearby in his C.B. 2. office. Everyone else connected from their home. Brian Pape even added some flair by making his screen background a tropical beach scene.

Of course, much of the meeting centered on the coronavirus crisis gripping the city and planet. In the first part of the meeting, several local politicos patched in personally to give reports, including Assemblymember Deborah Glick, state Senator Brad Hoylman, Manhattan Borough President Gale Brewer and Erik Bottcher, Council Speaker Corey Johnson’s chief of staff.

The board’s very short public session — where members of the public can make brief statements — was composed of two e-mails sent in by locals, which were read aloud by Dan Miller, the board’s first vice chairperson.

Due to the emergency situation, Governor Cuomo signed an executive order allowing community boards to meet and hold votes remotely — though he’ll have to keep renewing it to keep the order active. Hoylman noted he is trying to pass a law to authorize this provision for remote meetings to kick in automatically in the event of such emergencies.

Hoylman related that he was the only person in his train car coming back from Albany.

“It’s eerie but people are doing what they should,” he said.

Glick preached calmness in the face of the health crisis.

“‘The thing we have to fear the most is fear itself,’” she said, paraphrasing Franklin Delano Roosevelt, adding, “I don’t want people to be panicked.”

She said earlier that week the state Legislature had passed a number of bills in Albany, with the politicians coming in to vote in small groups.

“We’re all working remotely,” she said.

“Even in Greenwich Village, we’re looking at certain places that may be used for overflow,” he explained. “We’re very well prepared for this. We’re really well positioned to take care of this.

Levy said they would prefer that patients seeking treatment come to Lenox Health Greenwich Village solo, so as to reduce the numbers at the facility.

“For mild symptoms, we’re really advising people to rest at home,” he added.

The Seventh Ave. health center’s executive director, Hellinger, said that “the toughest thing” for them, in terms of personal protective equipment, has been the N95 face masks.

“There’s truly not enough to go around,” he said. “That is probably the hardest thing for us and all hospitals.”

Gloves, gowns and face shields, they have, he added.

He said some people have actually shown up offering boxes of the masks, which has been really touching.

In response to a board member’s question, Hellinger admitted that they are trying to stretch the masks’ usage.

“The C.D.C. recommendation is you change the mask every five interactions,” he said.

However, Northwell is asking medical staffers to try to use the masks for two or three days by wearing another mask over them.

Hellinger added that the administrators at the facility — like him — are being rotated, so that they’ll be covered in case one of them gets sick.

C.B. 2 Chairperson Booth noted he had just seen some elderly people entering the Morton Williams supermarket at Bleecker St. and LaGuardia Place, and he asked the Northwell staffers what kind of precautions elderly shoppers should be taking.

“Whatever can get delivered, have delivered,” Levy said. “I think for at risk people, wearing a mask is not a bad idea. Try not to be in close quarters… . If you see someone sneezing or coughing, turn your back, try to create some distance, try to protect your face and nose.”

The doctor said he lives in the Village and that he and his wife had gone shopping a few times that past week and that “it’s really, really challenging” to keep the proper distancing.

He noted that Northwell is actually going beyond the recommended six feet of social distancing.

“We’re using 10 feet if it’s feasible,” he said, adding that if people can keep that, it’s advisable.

Hellinger added that, in his father’s neighborhood, a supermarket is opening up at 6:30 a.m., so that older shoppers can be inside the store during a less crowded time.

Booth noted that, moving forward over the next few weeks, the board would “take a break” from holding its various committee meetings. There’s obviously not a whole lot to vote on right now amid the pandemic and the governor having put the state on “pause.” For example, the Department of City Planning recently suspended all land-use applications.

The chairperson added that the C.B. 2 Executive Committee, which usually only meets monthly, would hold ongoing weekly meetings remotely “to see where we’re at.”

District Manager Gormley announced it would be his last date being physically in the board office and that he would be working from home remotely during the crisis.

Meanwhile, board member Coral Dawson adamantly said she would like the option of being able to attend meetings remotely from now on.

“As the only woman who is pregnant and serving on this board,” she said, “it’s sort of ridiculous that it’s taken this long. We should have the opportunity going forward.”

Booth responded that for remote meetings to continue, either Cuomo would have to keep renewing the executive order or Hoylman’s bill would have to be passed.