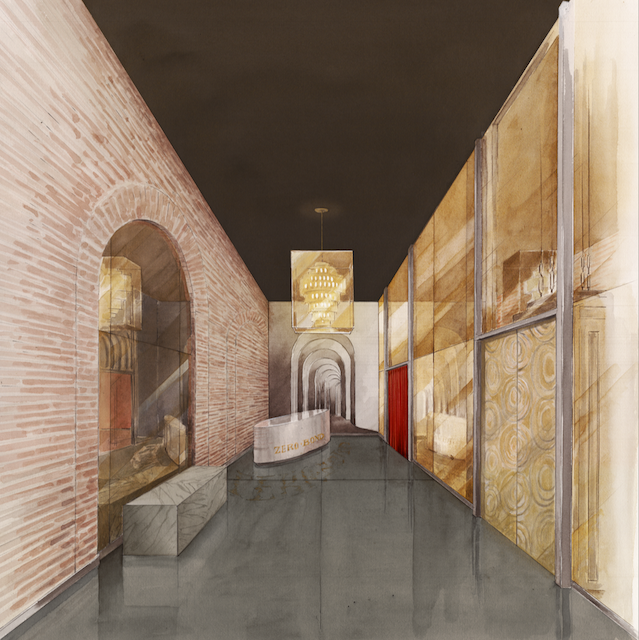 A rendering of the ground-floor lobby of Zero Bond. The private club's owner hopes to use the lobby to get permission to serve alcohol to a hoped-for outdoor dining area. (Courtesy Zero Bond)

BY LINCOLN ANDERSON | Don’t expect any exceptions from Community Board 2 for bold-face names when it comes to nightlife — even when it involves a member of its own board. Not even if you’ve dated Anne Hathaway, Ashley Olsen and Jamie-Lynn Sigler…it doesn’t matter.

And not even amid a business-crushing pandemic.

C.B. 2 last week overwhelmingly voted to reject a proposal by club kingpin Scott Sartiano for an outdoor dining area on Bond St. outside Zero Bond, his new Noho nonprofit private-members club. But the dining space would more accurately be described as not just outside but “below” Zero Bond, and that’s part of the issue.

The board argued that because Zero Bond, at Broadway and Bond St., is not located on the ground floor, it cannot legally have an outdoor dining area. Sartiano, however, offered to convert a small part of the club’s ground-floor lobby — which he described as his office — into a bar service area, as part of the plan.

“The past 12 months have been very tough for Zero Bond,” he said at the Feb. 18 full-board meeting. He said he was open for three months during the pandemic.

Technically, Sartiano is applying to the State Liquor Authority for an alteration of Zero Bond’s existing liquor license to expand it from the club’s location on the fourth and fifth floor — along with an as-yet-unbuilt sixth-floor rooftop addition — to a portion of the 300-square-foot ground-floor space, which C.B. 2 described as a “lobby/reception area,” where Sartiano’s office is located.

Sartiano is applying to the S.L.A. on a “speculative” basis, though, hoping the de Blasio administration approves the plan under its Open Restaurants program. However, a requirement of the outdoor-dining program is that the applicant’s business is on the street level.

In short, as the C.B. 2 resolution on the issue summed it up, “[W]hile sympathetic to the hardship experienced by the Applicant due to the Covid-19 pandemic, the…Applicant being a Community Board 2 member and a well-regarded and respected [nightlife] operator who also serves on the Board of the local Business Improvement District and Board of a local community benefit organization, Community Board 2 questions whether a nonprofit private members club, meeting hall and workspace with eating and drinking accessory uses in limited areas of the premises all located on the 4th and 5th floors qualifies as a food establishment for the purposes of participating in the current NYC Open Restaurants program.”

According to the community board, Zero Bond has “two accessory-use restaurants — a sushi/omakase dining area and a brassiere.”

The board also questioned the notion of a private club being given public space on the street.

“[T]here were further concerns expressed,” the resolution noted, “as to whether it was in the public interest or the intent of the NYC Open Restaurants program to have a private members club take over public sidewalk and street space at no cost for the exclusive and sole purpose of serving their private members, the program being designed for restaurants and bars.”

C.B. 2 did note, though, that, “the Applicant was willing to consider having a few tables available for nearby residents or members of the public.”

Under Zero Bond’s club license from the S.L.A., the place currently can only serve alcohol to club members and their guests and is prohibited from serving the general public.

C.B. 2 also said Sartiano, instead of seeking S.L.A. approval right away, should have applied with the city first to check if his idea is kosher under the Open Restaurants program.

Before voting on the application, board members debated the issue among themselves.

“This is not a restaurant. This is a private members club,” Mar Fitzgerald insisted, speaking against the application. “It’s not personal,” she assured Sartiano. “It definitely sounds illegal to me, allowing a private, exclusionary club to have space on a public street.”

But Rich Caccappolo saw it differently. Open Restaurants is hardly a perfect program to begin with, he noted, arguing that Zero Bond deserves some leeway.

“What’s the worry?” he asked. “[Setting a] precedent? I don’t like to cite program rules that are flawed.”

However, Cormac Flynn pointed out that when Sartiano first applied for a liquor license before the place opened, neighbors specifically said they did not want the lobby space to serve alcohol.

“The S.L.A. Committee [of C.B. 2] does not give permission for things that are not permitted,” she said. “We can’t permit an impermissible activity — that’s a ground rule for us.”

For his part, Sartiano said, if he won approval, he would “happily close [the outdoor dining area] after two years and come back” to Board 2 to apply for a renewal.

A handful of C.B. 2 members voted to give Zero Bond a break and allow the outdoor area, but the rest of the board voted no. Community board votes are advisory only and the S.L.A. will ultimately make the decision.

The board, in its resolution, said that if an outdoor dining area is ultimately approved for Zero Bond, it should be temporary, and end “at the conclusion of the 2021 outdoor dining season,” unless Sartiano returns to C.B. 2 beforehand for a renewal.