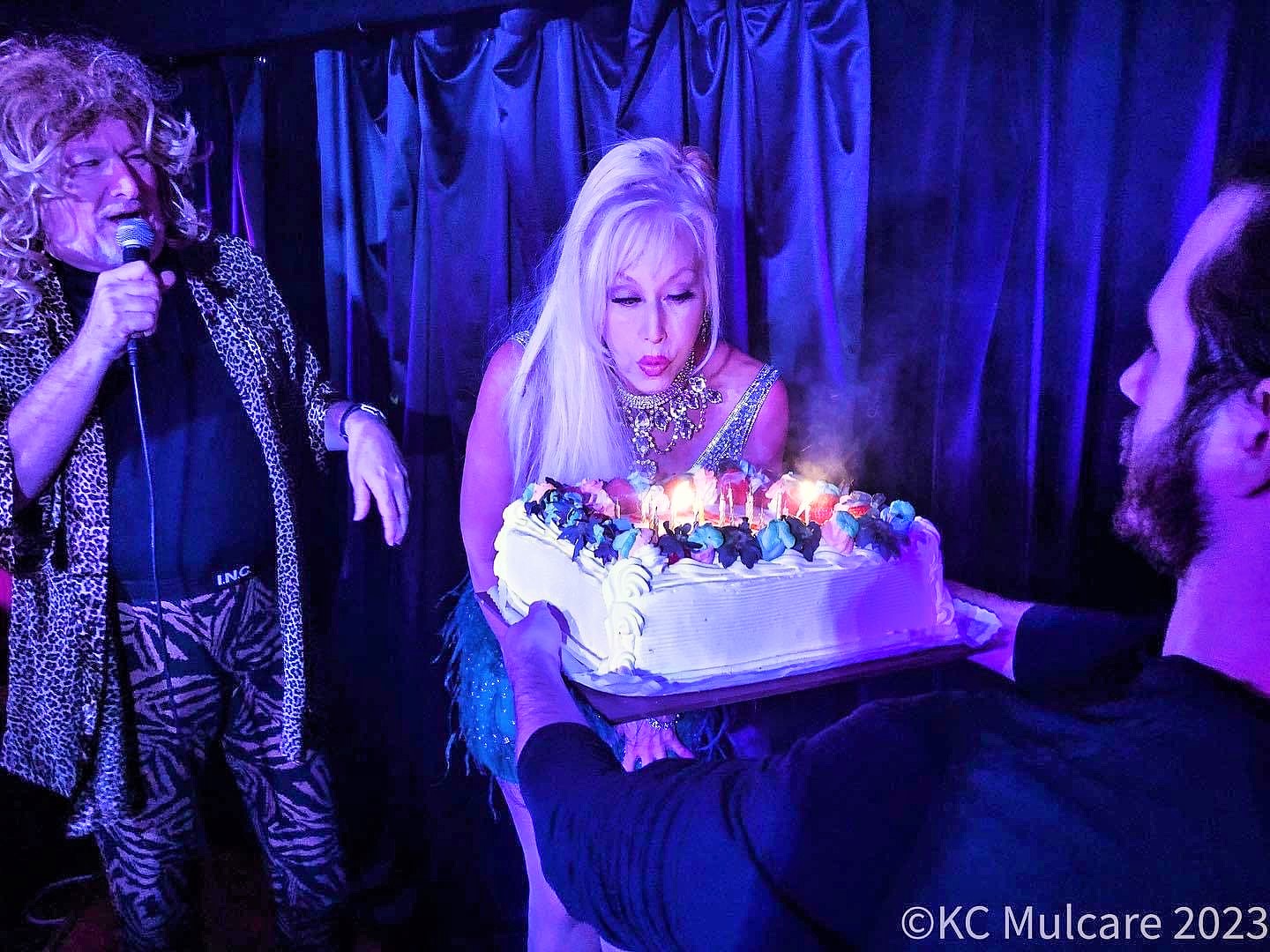 Wendy Stuart with Tym Moss on the mic. (Photo by KC Mulcare)

Night of, oh, so many stars: Wendy Stuart’s birthday feted at Pangea

BY JOHN PIETARO | The scene was unmistakably Pangea, that home of outsider hip, as the bar and club overflowed with a timeless sense of bacchanal. The occasion on Sun., Jan. 15, was the birthday fest of Wendy Stuart, actress, model and comic, tenacious social activist, deliberate night owl, planetary traveler, author and host of her own television and radio shows. Stuart is also highly active in the Imperial Court of New York, so the opulence of birthday cake and libations paled in comparison to the surplus helpings of camp.

Rapidly, the space filled with well-wishers and others of glitter and glam, including fashionista Nick Lion, as both front stage and cabaret room swelled with performers from On and Off Broadway.

Joe Preston, a friend of Stuart’s and the official guardian of Jackie Curtis’s estate, remarked, “There’s no more magnificent place to be than right here, right now,” adding that Pangea alone stands as “the new Max’s” within a sea of venues in the city.

Stuart initially took on emcee duties, wryly informing the room, “I’m still trying to figure out why I’m not famous yet.” She then performed an original sendup of Nena’s “99 Luftballons,” exchanging its Cold War alarmism for coronavirus anxieties. But the message was far from grave. In fact, Stuart — who began by assuring all that she’s no singer — burned through the parody with tongue firmly planted in cheek.

“In 2020 we were set to produce a sitcom and it turned out to be COVID,” she said. “So, instead, I wrote a book about not being famous.” (Her “Last Model Standing” remains a favorite in such quarters.)

Among the performers was powerhouse vocalist Darius Anthony Harper, who took time off touring (was that with “Kinky Boots”?) to set this house on fire. Others on hand included Tym Moss, singer-songwriter and red-carpet reporter who is Stuart’s co-host on “If These Walls Could Talk”; sensational young vocalist AVIVA, who belted out 4 Non Blondes; stand-up comic Ike Avelli (also serving as host); vocalist/dancer and a founder of the vogue movement Coby Koehl; celebrated drag artist Gio Michaels lampooning Judy; recent cabaret sensation Cecile Williams; and Off Broadway vet Brian Alejandro, who sang a dazzling rendition of “That Old Black Magic.”

Stuart’s husband, fashion photographer and artist Alan Kaplan (whose paintings adorn the walls of Pangea), could be seen out front, shooting the performers and surrounding merriment. ICON Magazine’s Lothario DeAmour, commenting on the honoree, said, “What can I say about Wendy? She’s old school in modern times.”

And one pair of revelers, Peter and Zach, added that, “The range of people Wendy brings together, every shape and face, everyone being themselves, it’s just amazing.”