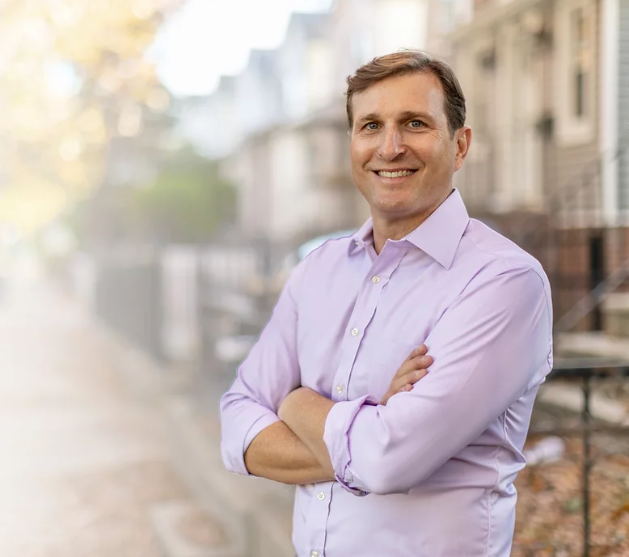 BY THE VILLAGE SUN | In a coup for his campaign, The New York Times on Saturday endorsed Dan Goldman in the Democratic primary for the 10th Congressional District.

The newly drawn district includes Manhattan south of 14th Street, plus a large swath of northeastern Brooklyn, ranging from Park Slope and Carroll Gardens to Borough Park and Red Hook.

“This is a major moment in our campaign to bring accountability to Washington and protect our democracy from far-right attacks,” Goldman’s campaign said of the Times’s coveted nod. “We’re honored to have this critical endorsement — and thrilled that so many more New Yorkers will now be able to learn from the most trusted source why Dan is the right leader for NY-10.”

The Goldman campaign declared, “Dan is the only candidate in this race who Donald Trump and his Republican Party fear.”

The Times’s editorial board noted that while a “crowded and accomplished field” is vying for the seat, two candidates “stand out”: Goldman — who was the lead counsel for the Democrats in the first Trump impeachment trial — and Westchester Congressmember Mondaire Jones.

The editorial notably snubbed several candidates who are more well known locally, including Councilmember Carlina Rivera and Assemblymembers Yuh-Line Niou and Jo Anne Simon, not even mentioning their names.

The Times’s focus, though, was clearly on “defending democracy” — keeping Donald Trump and the G.O.P. in check and Trump out of the White House.

“Mr. Goldman, a former federal prosecutor, has lived in Lower Manhattan for 16 years,” the editorial stated. “His uncommon experience, particularly his knowledge of congressional oversight and the rule of law, could prove especially valuable in Congress in coming years.”

The editorial board cited its interview with Goldman, in which he stated, “’I have been on the front lines leading the fight in Congress against Donald Trump and his Republican Party and trying to protect and defend our democracy and our institutions and our rule of law.'”

(Last month, as reported by The Village Sun, Goldman released a “A Five-Point Plan To Defend Our Democracy.” The scheme calls for abolishing the Electoral College, establishing term limits for U.S. Supreme Court justices and suspending the statute of limitations on offenses committed by presidents and vice presidents before or during their time in office.)

The Times endorsement added that, “thanks to his work on the impeachment trial,” Goldman already has close working relationships in Washington.

Despite an eyebrow-raising statement by Goldman to Hamodia on abortion, about which he later said he “misspoke,” the Times assured that he “made clear he will passionately defend” abortion rights.

Goldman’s experience in law enforcement as a former prosecutor for the Southern District of New York would be helpful too, if he wins election, toward ensuring public safety, the paper said.

Addressing his personal wealth as an heir to the Levi Strauss jeans empire — which his opponnets have tried to make an issue out of — the Times noted that Goldman supports a ban on stock trading by congressmembers and has pledged to put his assets into a blind trust, if elected.

Nevertheless, Goldman, if elected, would definitely need to work to show he can represent everyone in the diverse NY-10, the Times said.

“Although he lives in the district, much of which is affluent,” the editorial stated, “Mr. Goldman would need to use his first term to convince the large numbers of lower-income and middle-class Americans he would represent that he understands the issues facing those constituents, especially the need for more affordable housing and better public transportation.”

As for Jones, the Times’s runner-up for the seat, the editorial praised him as “a bridge builder between the progressive wing of his party and its more moderate leadership,” adding that he  has been “a prolific legislator, particularly on voting rights.”

At the same time, the Times conceded that neither Goldman nor Jones “have as much experience working in the communities they seek to represent as other candidates in the race.”

On that note, the Gray Lady did give a shout-out to former Congressmember Elizabeth Holtzman — who represented part of the district in the 1970s and ’80s — recalling she played a key role during the investigation of Richard Nixon. Holtzman “made a similar —  and compelling — case” for her candidacy, in describing how, like Goldman, she would be a democracy defender, the paper said, yet adding that the district “is ready for new representation.”

Hank Sheinkopf, the veteran political strategist, called the Times’s endorsement very important in this particular election — and yet he strongly critiqued it, too.

On the one hand, he said, the influential outlet’s endorsement “sorts out the chaos” in the race, given how many candidates are running.

The editorial also has an abnormally high impact in this case because of the primary’s unusal date — Aug. 23 — so, “It’s a wake-up call” to voters that the election is actually happening, he said.

Sheinkopf conceded that Goldman has “spent his money wisely” and run a good campaign: “He created a persona that didn’t exist,” he said.

The fact that the attorney has also gotten airtime on MSNBC as a talking head during the Jan. 6 hearings “is a form of free advertising,” Sheinkopf noted.

However, the strategist said he found the endorsement personally “somewhat distressing,” especially when taken with the Times’s endorsement of Jerry Nadler over Carolyn Maloney and Suraj Patel in the 12th Congressional District.

“Women are the most underrepresented group in Congress,” he said. “The decision was made here not to keep one woman in Congress and not to put another one in — whether it’s Carlina or Yuh-Line.”

Similarly, he said, the Times’s endorsement represents the “disinclusion of emerging groups,” such as Asians and Latinos, which are booming voter blocs in the city.

“It is likely if [Goldman] wins he will certainly be fine,” he said. “But they’re all anti-Trumpites: Anybody that wins that seat would actively be opposed to Trump — but also represent groups that were on the outside — women and/or Latinos, Asians and Blacks, gays. Therein lies the difference.

“It’s the power elite — money and The Times — ensuring that those who want to get power don’t have it.

“You want to go after Trump?” he asked. “Make sure Liz Cheney gets elected.”

Sheinkopf grew up the son of teenage parents in the hardscrabble South Bronx and started out working blue-collar union jobs. His background, as he described it, is in labor and “social equity.” Not suprisingly, then, he generally frowns on candidates who come from money rather than from up through the community grassroots.

“That’s why this is somewhat distressing,” he said of the Times’s endorsement.

He does, though, have immense respect for former Mayor Michael Bloomberg, a self-made billionaire who used his wealth to win election to City Hall three times, and has gone on to champion and fund many important civic causes, from gun control to education.

“Bloomberg was an exception,” he said, though adding, in general, “The stories of New York are about striving not arriving.”

A Rivera spokesperson did not immediately respond to a request for comment on the Times’s endorsement.