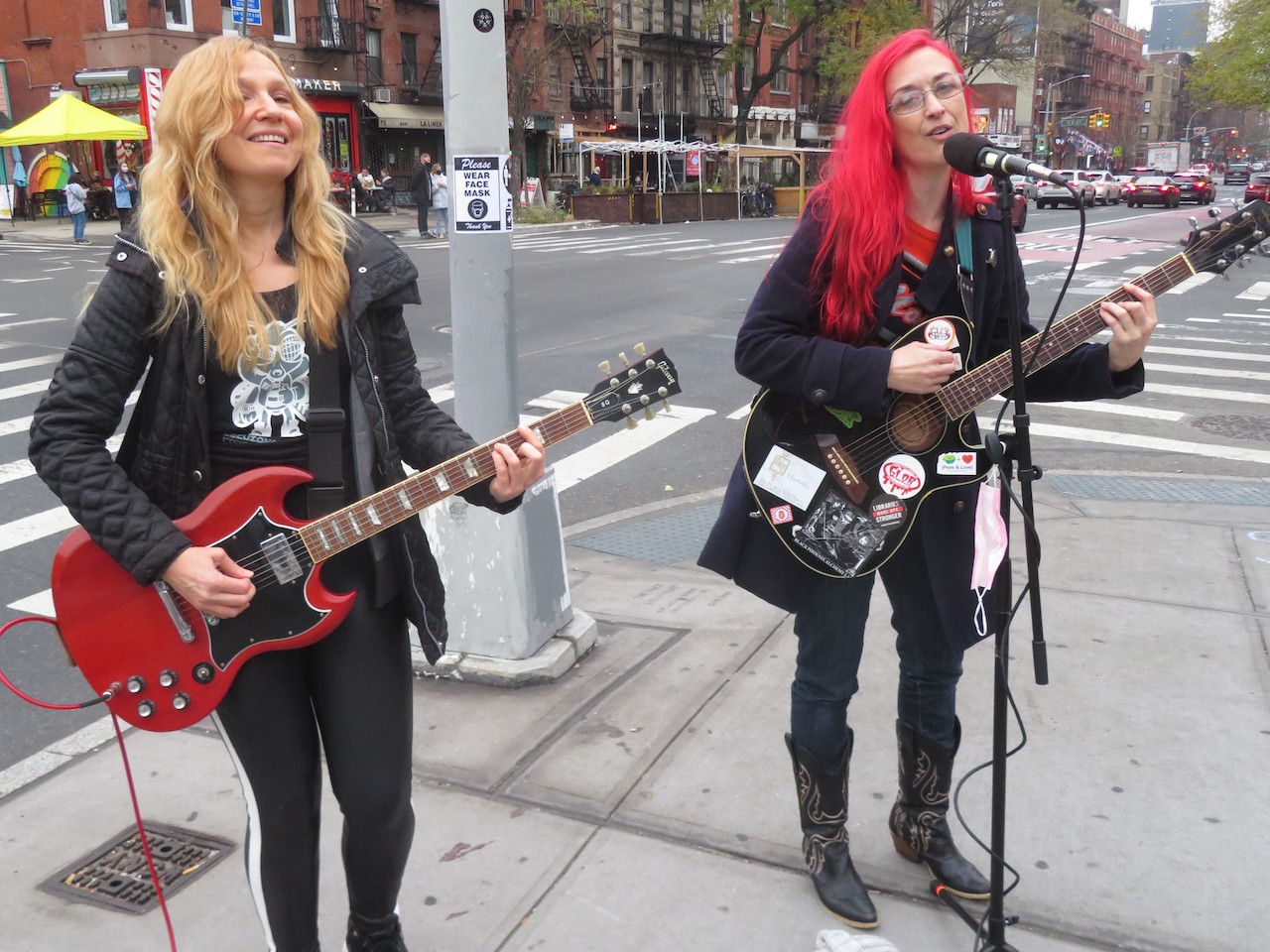 Baby Machine performed recently at the Nexus Holiday Market and Flea at Peretz Square. Like other local musicians, they have been playing outdoors during the pandemic, though no one has been applying for any permits. (Photo by Everynight Charley Crespo)

BY EVERYNIGHT CHARLEY CRESPO | Permits for outdoor concerts and other cultural events, which were halted in 2020 due to coronavirus concerns, likely will become available again in 2021.

New York’s City Council voted unanimously on Dec. 10 in favor of the proposed Open Culture program, modeled on the city’s popular Open Streets and Open Restaurants initiatives. The new program would expedite permits for outdoor music, dance, comedy and other performances. These events could begin on March 1 of this year.

Councilman Jimmy Van Bramer (D-Queens), who serves as the chairperson of the City Council’s Cultural Affairs and Libraries Committee, co-sponsored and introduced the bill in August. Mayor de Blasio supports the initiative. The Mayor’s Office of Citywide Event Coordination and Management would administer the program.

The Open Culture program would allow eligible cultural institutions and venues to apply for permits and use approved open spaces for artistic or cultural events. It would allow for ticketed concerts, plays, sketches and other entertainment on city streets and other open spaces. The program would remain in effect until Oct. 31, 2021, with the possibility of extension until March 31, 2022. All events would be required to abide by state and city COVID guidelines.

Permits from the city’s Street Activity Permit Office, suspended at the start of the pandemic, are typically issued for street festivals, block parties, farmers markets, commercial or promotional events and also religious and political events. Under the new bill, applicants would only need to self-certify that they are complying with COVID safety rules.

The Open Culture program would expedite permits allowing for the staging of special events at designated outdoor spaces. The bill does not appear to regulate entertainment at sidewalk cafes or curbside performances by buskers and troubadours. Typically, musicians who play in parks and on sidewalks do not apply for permits since their performances would not be considered special events. Groups that use staging do apply for street activity and sound permits. Parks Enforcement Patrol or officers from the local police precinct can ask performers without permits in public parks to turn off their amplification.

The significance of the Open Culture bill is that larger concerts would be able to resume, along with ticket sales. Ticketed concerts ended in New York City with the start of the COVID-19 pandemic in mid-March. In October, Justice Frank Sedita III of New York State Supreme Court reversed the State Liquor Authority’s ban on advertising and ticketing for live performances at liquor-serving establishments.

However, many local business owners remained unsure how Sedita’s ruling affected the live-entertainment situation. As a result, sidewalk cafes continued to present live music outdoors at no charge, with musicians performing for tips instead of admission charges.

About 2,000 artists and groups that previously received funding from the city’s Department of Cultural Affairs or one of the five borough-based arts councils will be able to apply online for permits to perform at certain outdoor spaces. Additional individuals and organizations, either operating for-profit or nonprofit, can apply for a permit by partnering with any of the above groups. Applicants would pay $20 to participate in the program.

Performances would be allowed in the dozens of miles of open roadway already made available to restaurants and community uses through the Open Streets program. Under the plan, the city’s Department of Transportation would reveal a list of eligible open spaces by Feb. 1, 2021.

New York State laws supersede local efforts, however. Ticketed events in New York City must abide by COVID-19 reopening guidelines set by New York State officials. The state currently limits the number of people that can gather for “nonessential” events to 50. This cap may or may not change by March 1.