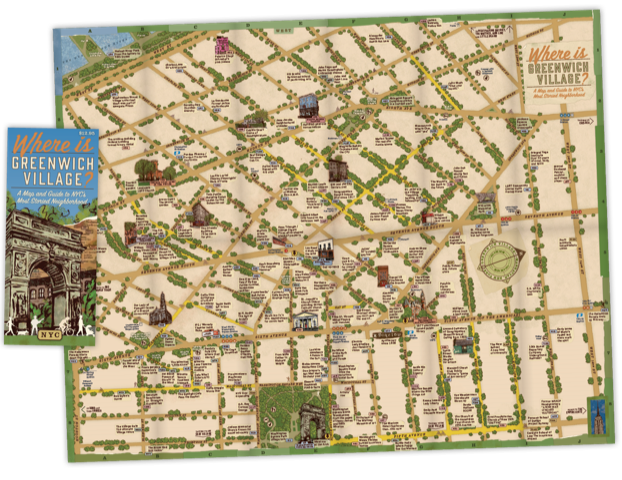 New map is an illustrated insider’s guide to Greenwich Village

BY LESLEY SUSSMAN | For nearly a decade, two Charles Street residents mapped their way from Elvis Presley’s most favorite haunts in Memphis, Tennessee, to their newly released map of Greenwich Village, an illustrated, insider’s guide to must-see sights and sounds that have made the community an essential visit for tourists and New Yorkers alike.

For Alan Grossman, 77, and his late wife, Andrea Shaw — both longtime Elvis fans — “The Memphis Map for Elvis Fans” was the definitive guide to enjoying Memphis and Graceland the way Elvis did. Now, in their “Where is Greenwich Village?” map, released just this month, users will find 150 handpicked places to see in the neighborhood.

“These are famous places and hidden gems that you won’t discover on your iPhone,” Grossman said.

Grossman added that the map is an indispensable introduction both for local residents and tourists to a neighborhood once inhabited by the Lenni Lenape Indians and one that immigrants, rebels, artists and celebrities have all called home.

“It’s a map where almost 150 points of interest can be found in seven categories, including history, literature, art and architecture, film and television locations, music, theater and important educational sites,” he said.

“We felt that visitors — and even locals — needed a curated guide to see the neighborhood the way it should be seen — up close and on foot — and one created by two longtime local residents who have lived in the neighborhood for many years.”

So what’s next for Grossman? A map of the United States? The moon? The universe?”

He laughed at the question.

“It’s a good question,” he replied. “I’m not really sure. Maybe something a little closer to home, like our adjoining neighborhood, Chelsea. People are also suggesting Brooklyn. At this point, me and my team are looking around and thinking about it.”

So what’s behind all this map business, Grossman was asked. Is he map crazy? Is it some kind of magnificent obsession? Again Grossman laughed.

“No, it’s just that Andrea and I have always been interested in maps,” he explained. “We’d always do simple maps when we traveled, creating little maps so we’d know the key places we wanted to go to.

“Even when friends visited us from out of town we’d do a little Google-like map for them of the Village,” he said. “This map was something we thought about at the spur of the moment when we were in Memphis looking for Elvis’s favorite hangouts and we couldn’t find them.

“In the process of creating the map for Elvis fans, the Memphis people kept asking us where we’re from, and we told them New York City. And they were intrigued as to whether or not we had done a map about where we lived. It got us thinking and Andrea loved the idea of doing a map of our own neighborhood.”

Asked about the top two or three places that he discovered in his own neighborhood that he wasn’t really familiar with despite having lived here for years, Grossman said they included 16 Barrow St., the home of Hank Greenberg, the “Hebrew Hammer” and prodigious home run hitter; Cobble Court at 121 Charles St., a clapboard house once home to Margaret Wise Brown, author of the children’s classic “Goodnight Moon,” and the Sanctum Sanctorum at 177A  Bleeker St., the mythical mansion of Dr. Strange, the Sorcerer Supreme, a Marvel Comics book hero and, later, the subject of a Walt Disney motion picture.

He added that users of the map will learn where to find “counterculture hotspots and literary watering holes, along with legendary entertainment spaces and distinctive architecture. They’ll also learn about the role that the gay community played in the neighborhood and the historical contributions of African Americans.”

Shaw died in 2016. Making the map took longer than expected, Grossman said, because of the COVID health crisis.

“Back in 2013 and 2014 we began the process of doing the map, but places were closing because of COVID,” he recalled. “We had to keep redoing the map. It was also hard to get together with people who were isolating themselves. We had originally included a lot of interesting bars and restaurants but, suddenly, they all closed.”