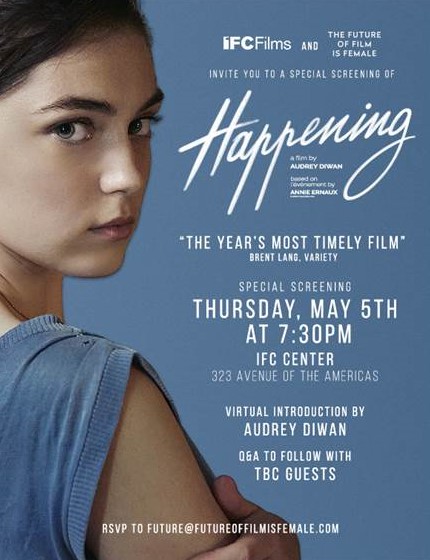 In support of women’s reproductive rights and on the heels of an impending U.S. Supreme Court ruling on abortion, IFC Films and Future of Film are hosting an advanced screening of the award-winning abortion drama “Happening,” with a post-screening discussion led by Planned Parenthood, this Thurs., May 5, at 7:30 p.m. at the IFC Center, 323 Sixth Ave., at W. Third Street.

The film punctuates the ongoing conversations around abortion rights — more so than ever following the leak of a draft opinion that would overturn Roe v. Wade.

“Happening” is an intimate drama that has been described as “gripping from start to finish” and which “just became the year’s most timely film” and “for many…is brutally relevant — and may be well into the future.”

Adapted from prize-winning author Annie Ernaux’s semi-autobiographical novel, “Happening” follows a woman’s moral and emotional journey involving an unplanned pregnancy in 1963 France, when abortion was criminalized. The film shows the bright young student’s actions based on her lack of a supportive environment and reminds viewers what happens when the right to choose is denied.

Audrey Diwan’s Venice Film Festival award-winning film “Happening” brings the story of one individual to life and provides the opportunity to start conversations among media, organizations, legislators, thought leaders and the public around what a world without safe access to abortion could look like.

Speakers at the IFC event will include Caren Spruce, senior director of arts and entertainment engagement for Planned Parenthood Federation of America.