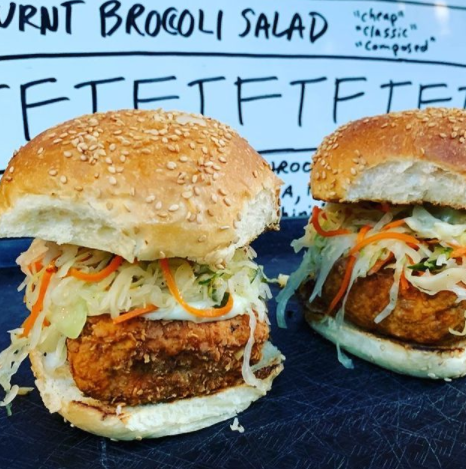 “Every walk-up sexy noam chomsky costume gets free broccolis,” the restaurant wrote on in its Instagram post to attract trick-or-treaters.

Six years after it opened in 2015, the owners of the five-seat-or-so nook on E. Ninth Street announced this August that Superiority Burger will be moving around the corner onto Avenue A, where Superiority Burger will have 33 tables and 82 seats, along with a four-seat bar. The space was formerly home to the Ukrainian restaurant Odessa, a longtime neighborhood fixture that closed this past summer and is currently vacant.

For East Village residents, however, one less restaurant under their windows is a good thing. Since Mayor de Blasio’s Open Restaurants program permitted eateries to set up tables outdoors on sidewalks and in parking lanes, many locals have been frustrated by the noisy crowds, plus messy aftermath left by dinners from the night before.

At the end of October, about two dozen residents, mostly from Downtown Manhattan, sued the city in an effort to stop the current restaurant scene outside their homes from becoming a permanent reality.

Noise complaints to 311 about East Village bars and restaurants have spiked due to Open Restaurants. Residents’ frustration has been clear at the monthly meetings of Community Board 3, where residents decried operators for taking over public space and drawing late-night crowds.

However, that was not the case with Superiority Burger, whose staff and lawyer appeared before the C.B. 3 State Liquor Authority and Department of Consumer Affairs Committee on Oct. 18 to negotiate stipulations for a full on-premise liquor license for the new space, at 119 Avenue A, between Seventh Street and St. Mark’s Place.

In addition to the support petition signed by 130 residents who live within two blocks of the vegetarian burger joint, participants at the Zoom meeting were vocal in singing the praises of Brooks Headley and his restaurant.

“I think these operators are at the top of their game nationally and internationally,” said Sara Leveen, co-owner of Vietnamese restaurant Hanoi House, at 119 St. Mark’s Place. “They have been super generous on food and time and just checking in on us.”

Ben Lowell, the other co-owner of Hanoi House, added that he really appreciated the biweekly visits from the burger bar’s general manager, Sheryl Heefner, who would also bring extra food along with her from the restaurant after service.

Christopher Lopez, a resident of 121 Avenue A, located next door to the former Odessa space, spoke about the chaos and disorganization on his block.

“It’s just a crazy town through the seasons,” Lopez said of the streets around Tompkins Square Park. “But Superiority Burger brings in this elevated feel.”

Lopez added that people tend to fall in line when waiting for their food, and the staff at the burger bar has a positive impact on people’s behaviors.

“Generosity, friendship, community, all of those things are very real on E. Ninth Street,” Lopez said of Superiority Burger’s current location, at 430 E. Ninth Street, just west of Avenue A.

According to the restaurant’s lawyer, Michael Kelly, Superiority Burger will take advantage of the Open Restaurants program when it opens on Avenue A in early 2022. The curbside dinning will operate from 8 a.m. until 10 p.m., which is the default closing time set by the community board.

The restaurant will also take full advantage of the waiting area inside the new location, posting a staff member at the door to oversee it, in addition to a text-based waiting system to avoid crowding and loitering on the narrow sidewalk outside on Avenue A.

Fellow restaurateur Lowell is very excited for the friendly neighborhood veggie burger bar to move into a proper restaurant space. He plans to personally check in during after-hours.

“It will be nice,” he said, “to have a cocktail, a glass of wine, sit down and just see how they are doing.”