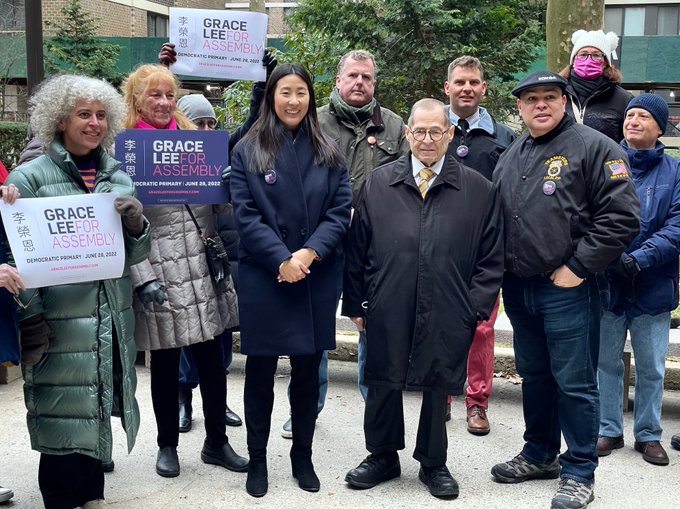 Grace Lee, fourth from left, picked up big endorsements this week in her Assembly race with the backing of Congresmember Jerry Nadler, sixth from left, as well as two political clubs and district leaders. (Courtesy Grace Lee)

Nadler and political clubs back Grace Lee for Assembly

BY THE VILLAGE SUN | Grace Lee’s candidacy for the 65th Assembly District got a big boost Thursday when the community organizer received the nod of Congressmember Jerrold Nadler.

“As an organizer, Grace Lee has a proven record of serving the diverse communities of Lower Manhattan and has consistently elevated the voices of the most marginalized people in the district,” Nadler said. “Grace has fought for the safe cleanup of a mercury brownfield near schools in the Seaport, empowered deaf tenants on Forsyth Street to demand building repairs, stood with Chinatown against anti-Asian hate, and delivered food to NYCHA families and seniors throughout the pandemic.

“She will be a relentless fighter for Lower Manhattan both in Albany and on the ground of every neighborhood in her district,” he added, “and she is laser-focused on making New York a safer and more affordable place for everyone who wants to live here. I started my career as an organizer and spent 16 years in the state Assembly, and it is with great enthusiasm that I endorse Grace Lee for the 65th Assembly District seat.”

“I am honored that Congressman Nadler has endorsed me in this race,” Lee said. “I admire his decades of service to this city and appreciate that he never lost sight of his roots as an organizer. He is a role model and mentor to the next generation of leadership, and I have learned a lot from him. It is important that our state legislators in Albany work hand in hand with our representatives in Congress in order to ensure New Yorkers are getting our fair share of resources. I look forward to partnering with Congressman Nadler to make New York a safer and more affordable place.”

“Endorsing Grace Lee was an easy decision to make for New Downtown Dems,” said Michael Kramer, the N.D.D. president. “Her work throughout the pandemic sourcing supplies for NYCHA, fighting anti-Asian hate and co-founding Children First NYC showcased her tenacity, her attention to detail and her common sense. These qualities will serve us all well up in Albany. As a member of the Seaport Coalition, I have worked closely with Grace to fight overdevelopment at 250 Water St. and the de Blasio administration’s disregard for city landmarking and zoning protections. NDD represents a diverse community of East River neighborhoods who will be well-served by having Grace Lee as our next New York State assemblymember.”

“Grace Lee has become an active member of our community and reflects the progressive values that we hold as a Democratic club,” said Marion Riedel, president of the Grand Street Democrats. “We are so pleased to endorse her and to work with her on the issues we will be facing in our community in the upcoming years.”

Local Democratic district leaders also lined up behind her candidacy.

“Grace Lee is the leader Lower Manhattan needs right now,” said Caroline Laskow, the female Democratic district leader for Assembly District 65 Part A. “As an organizer, Grace has proven that she has the power to bring people together to get things done. Grace is a unifier who can help bring our diverse district together to change our city for the better. She will be on the ground of every neighborhood listening to our communities’ concerns, and our voices will be reflected in every policy that Grace advances. I trust Grace to make our city safer and more affordable for everyone who lives here, and I can’t wait to cast my vote for Grace this June.”

“Grace Lee is both a leader and a team player,” said Lee  Berman, the male Democratic district leader for District 65 Part A, a public school parent and a lifelong Grand Street resident. “Although she didn’t win when she ran for this office for the first time in 2020, she never stopped showing up. Instead, she became even more engaged in our neighborhoods, and is determined to gain a block-by-block understanding of this district. I have no doubt that she will bring the energy and passion our community needs to the role of assemblymember. I endorse Grace because she cares about Grand Street, and I can’t wait to start talking to voters about her.”

“I’m proud to endorse Grace Lee for Assembly — she lives out her progressive values every day and fights tirelessly for our communities,” said Daisy Paez, female Democratic district leader for Assembly District 65 Part B. “She’s the kind of leader we need in Albany to get things done and bring change and resources to our district.”

“Grace Lee is the best person for the job of representing us in Albany,” Strother said. “I am impressed with the work Grace did to effectively organize deaf tenants on Forsyth Street, where she brought attention to terrible living conditions and demanded repairs. At Grand Street Guild, we have been hit hard by the pandemic and our voices need to be heard as we begin to recover. Grace will not only hear us, she will amplify us. She will bring us to the table.”

Lee was also previously endorsed by the Downtown Independent Democrats.