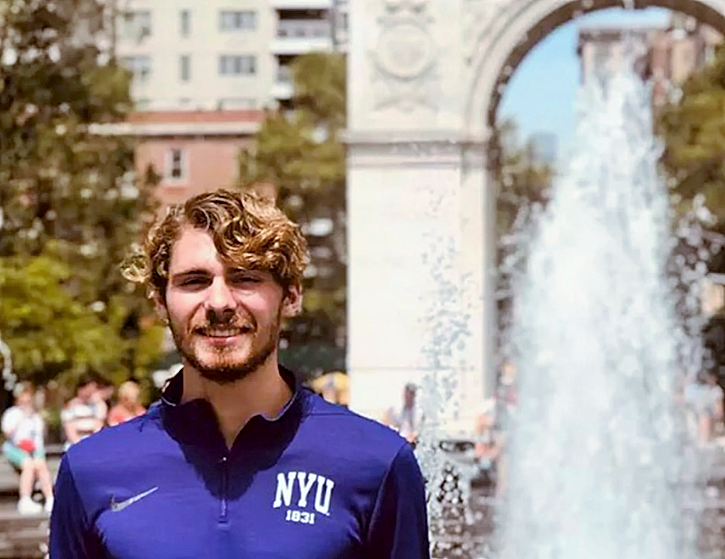 BY THE VILLAGE SUN | A 21-year-old New York University student was fatally struck by an allegedly drunk driver on the Lower East Side early Monday morning.

The victim was identified as Raife Milligan, a pre-med student from Indiana. He was hit by Chevrolet Camaro as he was crossing the busy crosstown boulevard near First Avenue shortly before 3 a.m. Milligan was taken to Bellevue Hospital but could not be saved.

The driver, identified as Michael de Guzman, stayed at the scene and was charged with driving while intoxicated and driving while ability impaired, according to police. The Daily News reported de Guzman was released without bail. According to the New York Post, it’s likely that charges against de Guzman will be upgraded in light of Milligan’s death.

According to StreetsBlog, the number of deaths on New York City’s streets in 2022 — including pedestrians, cyclists, motorcylcists, motor-vehicle occupants and others — already stands at 69 only one-third of the way into the year, already topping the totals for each of the previous seven years.

A GoFundMe effort for Milligan in one day had raised $31,400 from 475 donors. The money will be used to help pay for medical and burial costs and for family members’ travel.

Donna Begle, a family friend who organized the GoFundMe, wrote, “Raife attended New York University studying BioChemistry with the hope of becoming a doctor one day. He just loved life to the fullest always thinking of others first. While in New York he did volunteer work delivering food to the elderly. He loved playing video games and just recently introduced his own twitch channel, raife_tv, where he began streaming live a few days a week. He also had a huge passion for playing volleyball. He joined a club volleyball team at NYU and loved every single minute of it. He found a great group of friends when he first came to New York. They all loved hanging out by the Hudson River watching sunsets and throwing frisbee. He had a profound love for the Beatles and has acquired quite the collection of vinyl records. He loved his family with all his heart especially his twin, Reece, as well as his sister, Ryanne and brother Reid. His twin nieces, Coltrane and Era, adored their Uncle Raifey.

“Raife was one in a million. Brilliant beyond his years. Saying he will be missed is an understatement. He impacted so many lives in a positive way and will be greatly missed. We will live on through his memory holding him deep in our hearts forever. Legends never die!”

Clayton Patterson, the well-known Lower East Side documentarian and photographer, lives a bit more than three blocks from the spot where Milligan was struck. He’s currently showing his photos in Austria at the WildStyle & Tattoo Exhibition, so was not around the night of the fatality. But, in a phone interview, when Patterson was told Milligan was hit by an allegedly drunk driver, and asked if he felt Houston Street was a dangerous boulevard, Patterson instead went off on the area’s bar culture.

“I think the drunks are out of control,” he said. “They were f—in’ stupid just to turn this area into a drunk tank. There’s nothing down here but bars and dollar pizza. It’s just drunk kids. They’re smoking pot on the street every night, drinking. They’re out of their minds. There’s more bars than people. The only culture is drinking.”

A police spokesperson said he did not have information on where the allegedly drunk driver may have been coming from or going to.