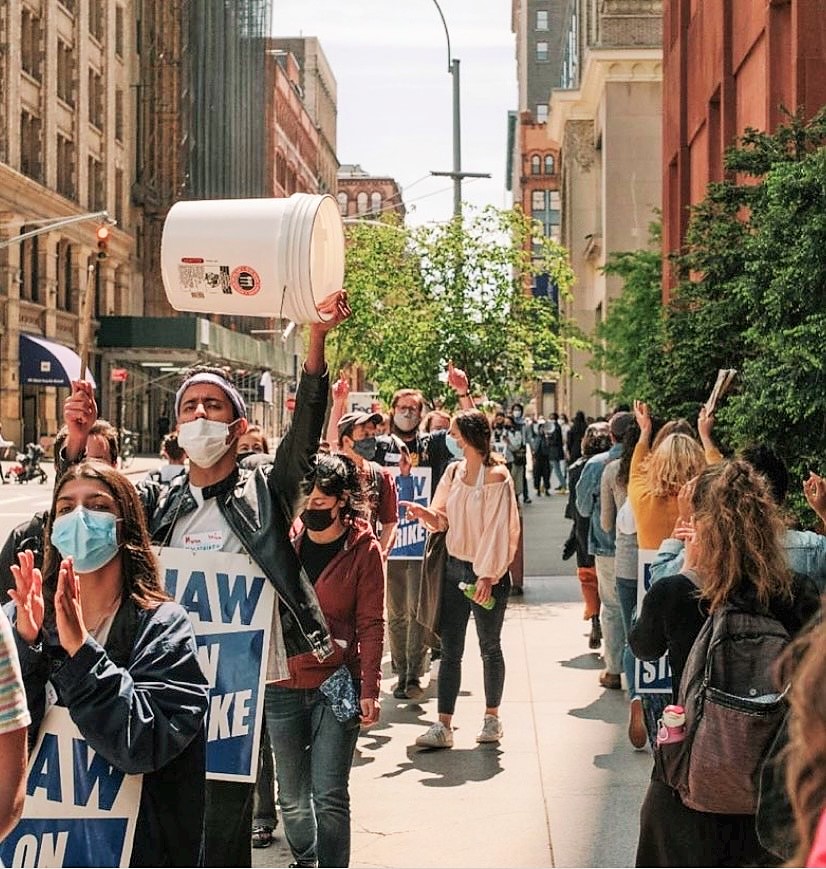 BY AIDAN SEIDEN | If you are a Greenwich Village resident, or a person who enjoys a brisk stroll past the Washington Square fountain, you might have noticed a consistent cacophony in the park from 10 a.m. to 3 p.m. every day for the past two weeks.

No, contrary to what you might think, it is not construction causing these noises, it is the N.Y.U. graduate students union entering their third week of protesting.

Occupying the south corner of Washington Square Park, across from the Bobst Library, is a group of graduate students who are on strike, protesting that that they will no longer tolerate N.Y.U. exploiting them.

The strike began on April 26, exactly one day after N.Y.U. President Andrew Hamilton and Provost Katherine Fleming sent an e-mail to the entire university community about the union.

“N.Y.U.’s graduate student union is threatening to strike on Monday,” they said. “We are writing to share with you the University’s position and explain why we believe this strike is unwarranted, untimely and regrettable, and our belief that if the union had agreed to make use of a mediator, this strike could have been avoided.”

N.Y.U. administrators and department heads have declined to respond to requests for comment.

However, for members of the Graduate Student Organizing Committee, the e-mail elicited a very strong reaction.

Barrett is a fourth-year graduate student at N.Y.U. in the College of Arts and Science and a rank-and-file member of GSOC.

“We started at the bargaining table shortly before the expiration of our contract [in August 2020],” she said. “We were working to get a response from N.Y.U. with regard to COVID protections — thinking about the extra hours that workers were facing with no additional compensation, as well as trying to get PPE for our workers. That rolled into the expiration of our contract and led to full-blown negotiations.”

Going on strike was a last resort for GSOC, but in the end, they saw no other option since N.Y.U. was not willing to meet any of their demands.

Amid the strike, professors have been left struggling to complete the spring semester alone, resulting in ungraded papers and tests, as well abruptly suspended teaching assistant-led classes.

According to a professor, who requested anonymity, “Some faculty members were resisting substituting their own labor for the work of their T.A.’s, but they were getting pressure from the dean to get students’ work graded.”

Although GSOC has added new propositions to the upcoming contract, the most important being the safety of their members (through acquiring PPE and, they say, dissociating N.Y.U. from the New York Police Department), the only progress they have seen thus far was on Thurs., May 6. N.Y.U.’s first meaningful move for compensation, as part of its proposal, offered the GSOC members a $25-an-hour wage, an increase from their previous $20 an hour.

While it isn’t much, it is definitely a step in the right direction, in Barrett’s view.

“It shows the strength of a strike and a collective action,” she said.