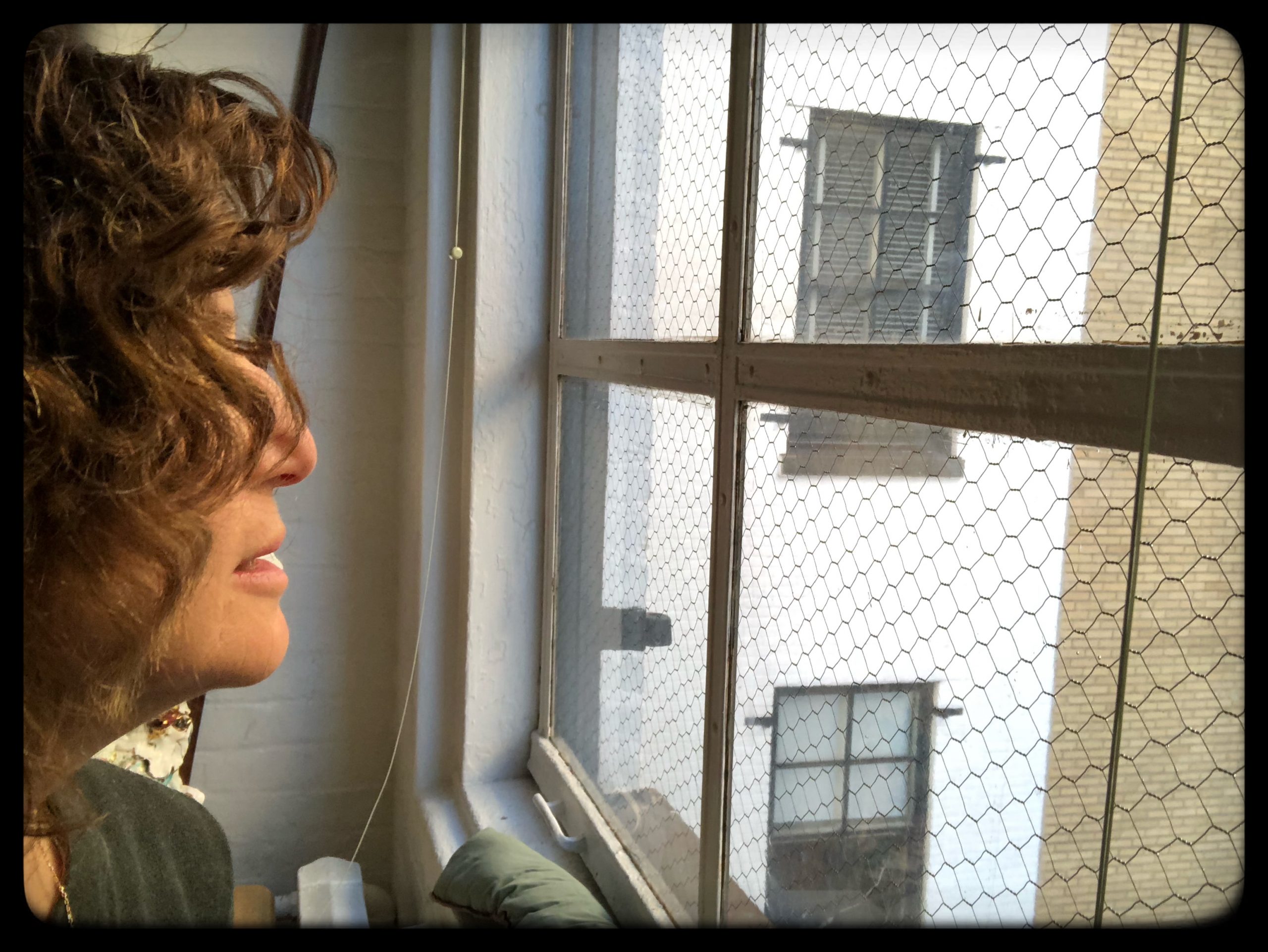 The writer looking out her window at Westbeth Artists Housing. (Courtesy Gayle Kirschenbaum)

My new relationship due to COVID-19

BY GAYLE KIRSCHENBAUM | They ask how I’m doing.

“How is life in confinement?”

They want to know as they’re also experiencing it. Some are alone, like myself. Others are with a spouse, a lover, a roommate, parents, siblings, pets, including cats, dogs, birds and fish.

Some have palatial apartments with views of Central Park, the Hudson River or the Statue of Liberty. Others are cooped up in a one-room apartment with only two windows facing an airshaft, as I am.

Many have discovered new recipes; some are learning a new language or finishing a draft of their novel. And then there are those who are struggling to concentrate, can’t get their work done and want to kill their partner, who is too close too often for comfort.

I’m fine. Yes, alone. Yes, no pet to hug. Yes, no view of the streets, only of the windows of the parallel hall.  Once people used to walk through that hall. Now, it’s silent, still, no one is seen.

We’ve been warned not to leave our apartments without wearing a face mask and gloves. Only one person is allowed in the elevator at a time unless you are family living together or housemates. There is no congregating in the lobby.

If you’ve ordered food from restaurants or groceries from the market, they are left outside and you are called to come down and pick them up. No one is allowed in the building that doesn’t live here, other than the mail person.

We have 383 apartments and take up one square New York City block.

My photo exhibit is hanging on the walls of the gallery hall off the main lobby. Since it’s a new and makeshift gallery, my photos are literary hanging by a thread — a nylon thread used for fishing. To hold them flat against the wall, we used Velcro and double-face tape. Several have worn and those photos are leaning forward and dangling.

It doesn’t matter as much now since no one other than the occasional person from our now-limited staff or a tenant passes by. I check the exhibit on the rare occasions I go out to buy food or for a bike ride. My hands push back the framed photos, hoping they will stick on the aged tape. They do, however, for a short time.

I often wonder if I should take the exhibit down. It was due to come off the walls March 31. I stop myself from doing so since I’ve heard from so many before we were locked up in our homes how much they enjoyed them.

And where would I put them now? I sold several but the buyers can’t come and get them now, so I’d have to stack them in my apartment. Have they been exposed to COVID-19?

I suppose I could wipe the photos down with disinfectant. Why? Why take them now. I’ll leave them for the time being.

To answer your question, how am I doing? I’m doing well, actually, quite well. I don’t have anyone to fight with. No one is getting in my way. I’m used to working alone.

I have a new relationship. It’s with my apartment, the place I ran from all the time.

Now, I have sunflowers in a blue vase and yellow chrysanthemums in another blue vase. In between them is a handmade decorative green-and-yellow dish propped up on a little wooden plate holder with baby’s breath flowers behind it. They’re on the counter in front of my window.

I love looking at this colorful display of textures and life. I no longer miss not having a view. I’m doing well. Thank you for asking.