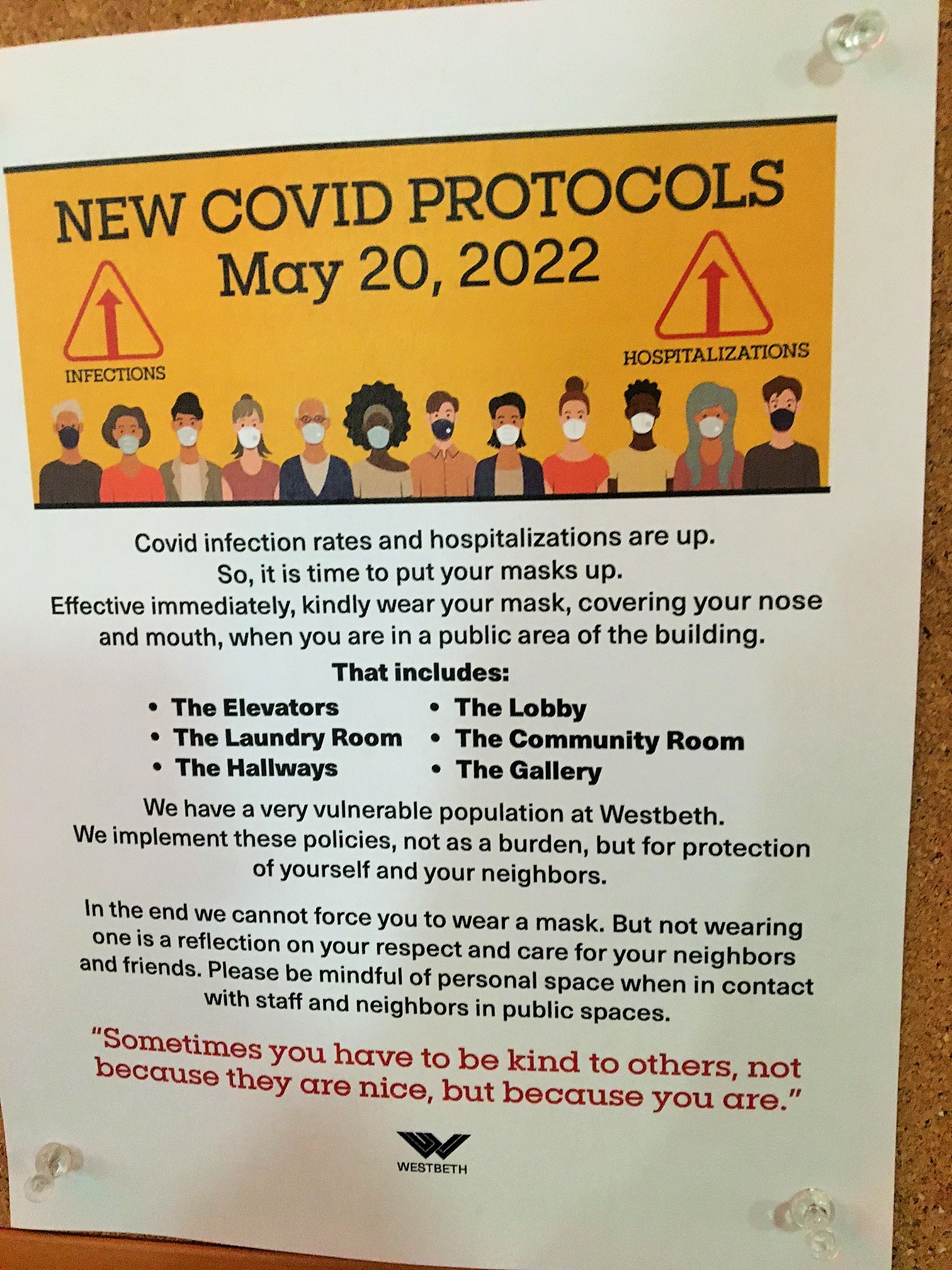 My brief respite from masking

BY KATE WALTER | I was relieved when management sent a memo stating that we were no longer required to wear masks in the common areas of our apartment building.

When the lockdown hit, I had just turned 71. I was in good health, but my age put me at risk. I was very careful until I got the life-saving vaccine. I wanted to stay healthy and enjoy my recent retirement, so I put up with isolation and loneliness and sacrificed my social life until I got the jab.

On April 1, I walked out into the hallway for the first time in two years with my face bare. I felt carefree as I took my recycling down to the basement. The elevator was empty. When I got back upstairs to the lobby, I noticed the staff member behind the security desk was unmasked. A young man with a big Afro, he was hired during the pandemic or right before. It was nice to finally see his handsome face.

As I stepped outside the building, my hand automatically went to my face to rip off my mask, a gesture I’d done so many times it was ingrained. But I had nothing to remove. I walked up the street to have breakfast at the Bus Stop Cafe. I was in a good mood.

We residents were being set free. Nothing says pandemic like having to slap a mask on your face the second you walk out into the hallway. Or trying to have a decent conversation with a neighbor when both masked. Right after the e-mail notice arrived in March, I talked with a neighbor who thought it was too soon to drop the rule since our building has many senior citizens.

She planned to continue to cover up. Her choice. I wondered how many others would do the same. Might there be conflicts or ill will between the masked and unmasked?

For two years I had religiously followed the pandemic rules in my building, Westbeth Artists Housing: Wear a mask in all public areas — the elevator, hallway, laundry room, recycling area. If I took a bag of garbage to the incinerator down the hall, I wore my mask even though I was only walking a short distance and there was a little chance I’d run into anyone at 10 o’clock at night. I tried to be a good neighbor. Maybe I was overly zealous at times.

When the pandemic hit and we went into lockdown, I volunteered to be a floor captain in our large building. This involved coordinating communication with our emergency committee and a section of my floor. I took my job seriously and even reported a defiant home attendant who refused to wear a mask in the hallway or elevator. I was annoyed she got away with this while delivery people still could not come upstairs, and we residents followed the rules.

As the end date approached, I wondered what would it feel like to step into the hallway or elevator for the first time in two years without a mask? Would I feel naked?  Would I make up my own rules as I went along? Now the choice was mine. The mundane act of riding the elevator had once been risky; now it was becoming routine again.

As I walked home from the cafe, I decided how I acted in my building would be a case-by-case decision. I’d keep a mask in my pocket. If I was in the elevator and someone was anxious and insisted I put one on, I’d do it. But it really felt great to enter the lobby without a face covering. I could breathe easier and no longer had to remove my fogged-up glasses.

That evening, I went downstairs to pick up a package. I got on the elevator by myself. As the door opened on other floors, younger neighbors got on, wearing masks. Was this a test? No one said anything. Also gone was the two-at-a-time in the elevator rule. Finally another bare-faced tenant got on the elevator and we nodded at each other in happy recognition.

As the month progressed, most tenants still donned masks inside the building, even though signs about the mandate had been removed from the entrances. Was I a renegade? I had gone from being the mask police to being more relaxed. I felt like an obedient schoolkid released for summer vacation. The first day I did laundry without a face covering was a big deal. A few times as I left my apartment, I felt like I’d forgotten an important item from my checklist.

At the same time, I was unhappy when the airlines and trains dropped their ruling. I did not want to sit next to an unmasked stranger for several hours. Who knew if they were vaccinated? My building felt safer since I knew my neighbors, and all employees had to be vaxxed.

The Saturday morning when I came back from the Greenmarket, a friendly porter, who has worked here many years, smiled at me and said, “Kate, it’s good to see your face.”

“Great. Good to see yours, too,” I smiled back.

“Well, I’m not taking mine off, ” another tenant interjected as she breezed past us.

Fine. Keep yours on, I thought. But after two years and four vaccinations, I planned to enjoy this freedom — while it lasted. Still, with cases on the rise again in Manhattan, I knew better than to toss out my stash of masks.

On May 20 I saw notices and got an e-mail that the mask mandate was back in my building in all the common areas. I was dismayed things had regressed in less than two months. “Oh no, not again,” I said to myself. “Will this ever end?”

I was weary, but willing to comply. Westbeth has been my home, my safe haven, for 25 years and I want to be a good neighbor. My masks are back hanging on my door knob, so I won’t forget to cover up as I exit.

Walter is the author of “Behind the Mask: Living Alone in the Epicenter” (Heliotrope Books).