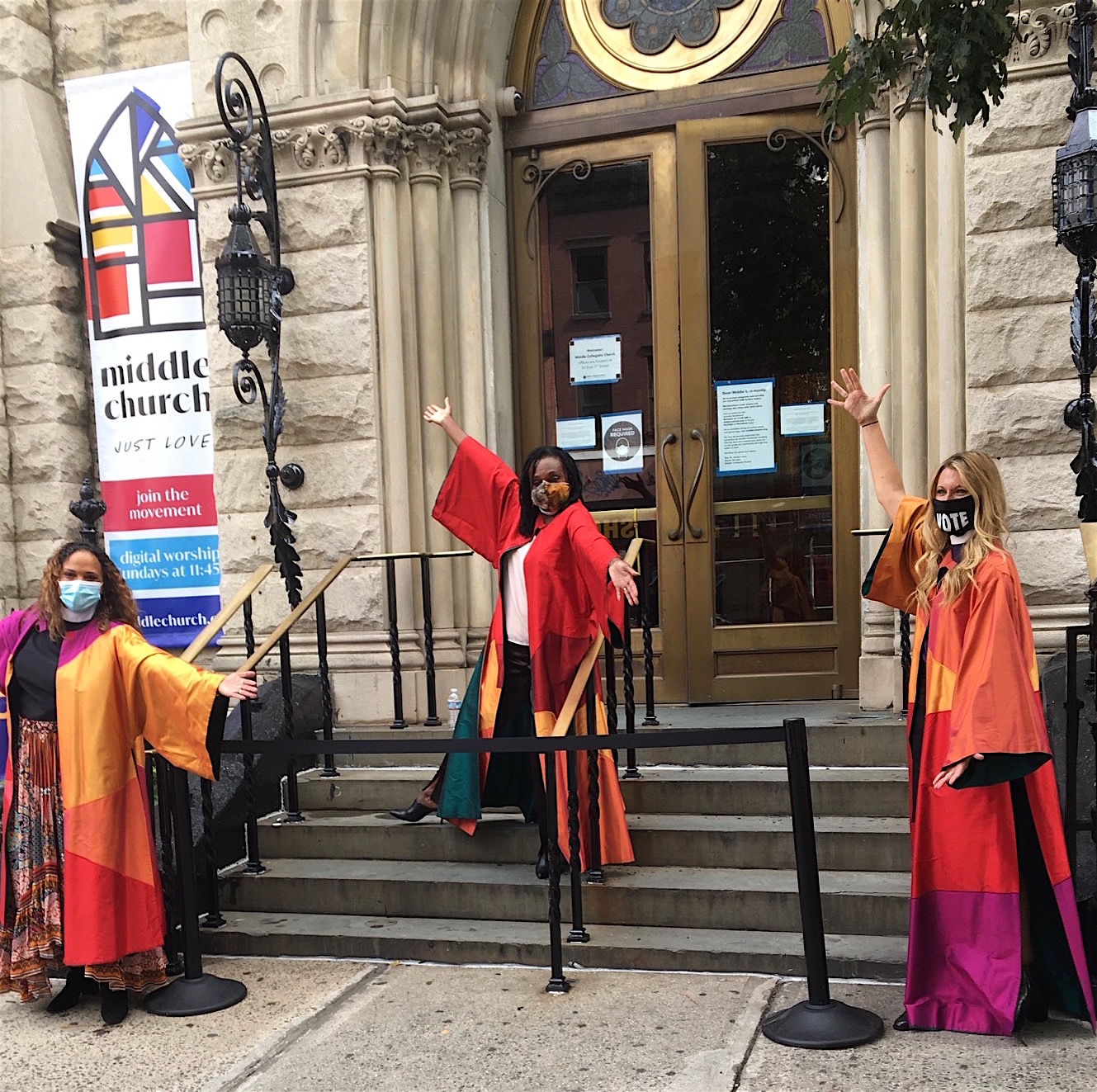 Ministers posing outside Middle Collegiate Church in October 2020, when parishioners came for socially distanced communion on the sidewalk. (Photo by Kate Walter)

My beloved church burned down

BY KATE WALTER | As if this year could not get any worse, my house of worship burned down early Saturday morning, December 5. My friend who has the Citizen app texted, saying she hoped it was not my church. It was.

I started crying when I saw the videos of the flames roaring through the roof of Middle Collegiate Church on Second Avenue. I’ve been a member of Middle Church for 12 years.

I joined after I went through a devastating gay breakup. Attending services at Middle helped me rebuild my life and get back in touch with my spiritual side. I felt so calm in the sanctuary with its beautiful Tiffany stained-glass windows. The sanctuary was destroyed, all the windows blown out.

Led by the dynamic senior minister Reverend Jacqueline Lewis, Middle Church welcomes everyone and has a large L.G.B.T.Q. membership. It is one of the most progressive churches in the city and even sponsors a float in the Gay Pride parade. A few months ago I attended a Black Lives Matter vigil out in front of the more than century-old edifice, (built in 1892), where we knelt on the sidewalk, socially distanced and wearing masks. Reverend Jacqui prayed and we responded. Cars going down the street honked in support.

Middle Church participated in the women’s marches in New York and D.C. and sponsors the annual Revolutionary Love conference, attracting people of faith from around the country.

We commemorated the murder of Trayvon Martin by all wearing hoodies to church. The Sunday after Trump won, the pews were packed. The choir sang “Jesus is rock in a weary land, a shelter in a time of storm.” Before the election, we sent thousands of postcards to voters.

What always struck me about the congregation was its diversity. It is racially, ethnically, culturally and economically diverse. Someone wrote on Facebook that one time when she went to services at Middle Church, a homeless person sat to her left and a celebrity was on her right.

I think it’s fair to say there is no other congregation in New York City like Middle Collegiate Church. Its motto is “Welcoming, Artistic, Inclusive, Bold.” As a recovering Catholic, who fled a homophobic church, I felt at home and embraced.

With its two choirs — a classical choir and a rocking gospel choir — the music was amazing.

So was the dancing on the altar and up and down the aisles. Attending a service was like going to a Broadway show. In fact, some singers who soloed there, like Tituss Burgess, are Broadway performers.

Singing “We Shall Overcome” at Middle Collegiate Church right after the November 2016 election. (Video by Kate Walter)

Several years ago on Christmas Eve, I took two Jewish friends. They loved the music and thought Reverend Jacqui was “a rock star.” Like our new V.P. Kamala Harris, Reverend Jaqui and her husband are an interracial couple. (She’s Black. He’s white.)

When, five years ago, the N.Y.P.D. and F.D.N.Y. spent weeks clearing the site of the terrible gas explosion fire across the street, Middle Church opened its social hall as a spot for city personnel to use its bathrooms and have food and coffee. With the church’s roots dating back to the colonial period, this tragedy is a loss to all of New York City but especially the East Village.

We have been meeting online during the pandemic and we were all looking forward to when we would be able to get back inside our church next year. The last person I hugged before the lockdown was a fellow congregant. We were supposed to have communion outside on Sunday, December 6, the first Sunday of the month, a new tradition recently started. Last spring, we lost the sanctuary to the virus but it was still there waiting for us to return. Now it’s completely gone.

On the night of the fire, the church held a Zoom meeting, “A Time to Grieve, A Time to Mourn.” More than 500 people attended and people from all over the country wrote into the chat to offer support. I was struggling to believe; then Reverend Jacqui issued a message, “No fire can stop Revolutionary Love.”

If you would like to help Middle Collegiate Church, visit middlechurch.org/donate .