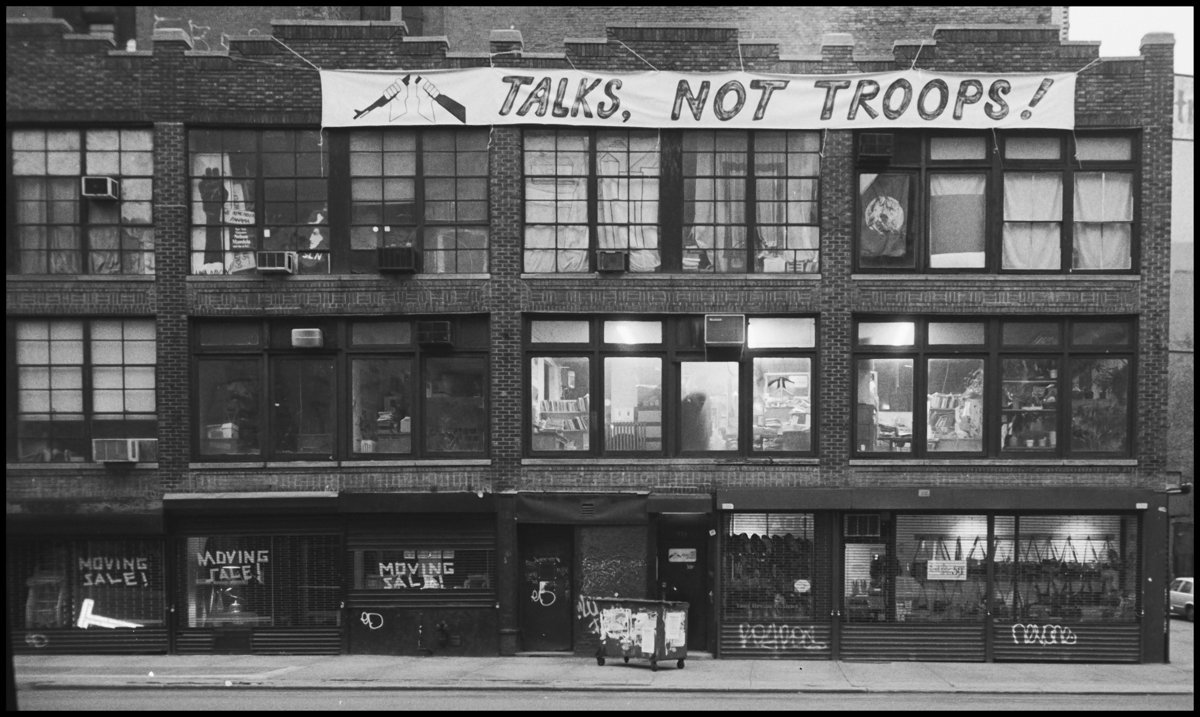 On Sept. 11, 2001, the writer had initially planned to go to the "Peace Pentagon," the War Resisters League building at 339 Lafayette St., for a staff meeting. In this photo, from 1991, an anti-Gulf War banner hung from the building. (Photo by Ed Hedemann)

My 9/11 story: Praying for Ella and for no more bombs

BY JUDITH MAHONEY PASTERNAK | Nineteen years ago as I write this, I was in my Upper West Side, New York, apartment trying to get over jet lag. At the time, I was working at the national office of the War Resisters League, the longtime pacifist organization, then located at 339 Lafayette St., and I was due there for a staff meeting at noon.

The day before, I had (reluctantly as always) flown back from Paris, where I had been for a quick three-day visit after a week spent visiting Berlin. But getting on to 9 a.m., I realized I was too stupefied to contribute to the War Resisters League meeting and called the office to say so.

The office manager and I were having an amiable conversation about my how I had spent my vacation, when she interrupted me to tell me that another staff member had just said a plane had hit one tower of the World Trade Center.

I turned on the news. Of course, I was watching live when the second plane hit Two World Trade Center — the other tower. By that time, of course, the whole world was watching (or as much of it as that phrase ever means). But for thousands of New Yorkers, the generic horror was mixed with a more specific one. I was one of them — someone I loved worked at the W.T.C.

The devil is in the details here. Of those thousands, some knew from the start that the victim with whom they were connected was dead. Some few of the horrified viewers had even spoken on the phone with a friend or spouse who was at her or his office on or above the 94th floor of One W.T.C. just before the first plane hit.

But Ella Matthews, my oldest and dearest friend, worked for the New York State Metropolitan Transportation Council on the 82nd floor and I had no way of knowing what had happened to her. Neither did her three daughters at that moment. I was on the phone with them sporadically during the hours that followed, but phone service in the city was itself sporadic, and for a long time we simply didn’t know.

Finally, late that afternoon, one of the girls called me. Ella was alive and well — traumatized, but well. She and a co-worker had walked down the 82 flights of stairs, reaching the bottom soon after the collapse of the second tower, but just late enough to miss being crushed or hit by debris. Their colleagues had chosen to stay in the office and were all dead. For a few years afterward, Ella was a featured speaker at memorial events, bearing witness that her grief was not and never would be a cry for war.

Ella was a committed, lifelong activist for peace and justice. I had always been proud to be her friend and was more so after 2001. She died in 2013, and I miss her still.

But for me, there’s also another context for my memories of 9/11, a more international one, so to speak. It starts some 21 years before that watershed event and ends, in a sense, at the moment I watched the second plane hit Tower Two.

In July of 1980, I was alone in London, on my first trip abroad (I started a little late). After taking in St. Paul’s Cathedral, I turned a corner and came upon the ruins of a smaller church. I was long familiar with the World War II history of that part of London, including the failed attempts of the German Luftwaffe to bomb St. Paul’s into oblivion.

I knew as I saw the remains of the small church that it had been ravaged, not by time, but by bombs, knew it with such immediacy that my stomach lurched before my mind found the words. This was only 35 years after WWII.

Standing on the London corner, I realized that there were people on the street with me who had endured death raining down from the sky — and realized as quickly that I and my fellow Americans were among the few peoples in the world who had never experienced that terror, at least in our homeland, although heaven knew we were possibly the world champions of delivering it elsewhere.

There was, in that sense, as in others, an American exception, a gap between us and so much of the rest of humanity. (I should probably admit here that as a very imperfect pacifist, I have a particular hatred for bombs because they kill so indiscriminately.)

Back to Sept. 11, 2001, and my immediate, gut responses to what I saw happening in front of my eyes — ongoing, inescapable horror, but flickering above or below or around it, two thoughts, more or less simultaneously. One was the question of Ella, almost but not quite wordlessly, something like oh my god where/how is she?

The other wasn’t a question — indeed, I felt it as a certainty, if also almost wordlessly: Now we know. Now it’s happened to us. Now we’ll never do it again, to anyone.

I was wrong, of course. But I think I keep hoping that one year, on one of these anniversaries, in the course of commemorating that terrible day, the nation that is still my own in so many ways finally gets, as the ultimate 9/11 takeaway, no more bombs. Not ever, not anywhere. Just, no more bombs.