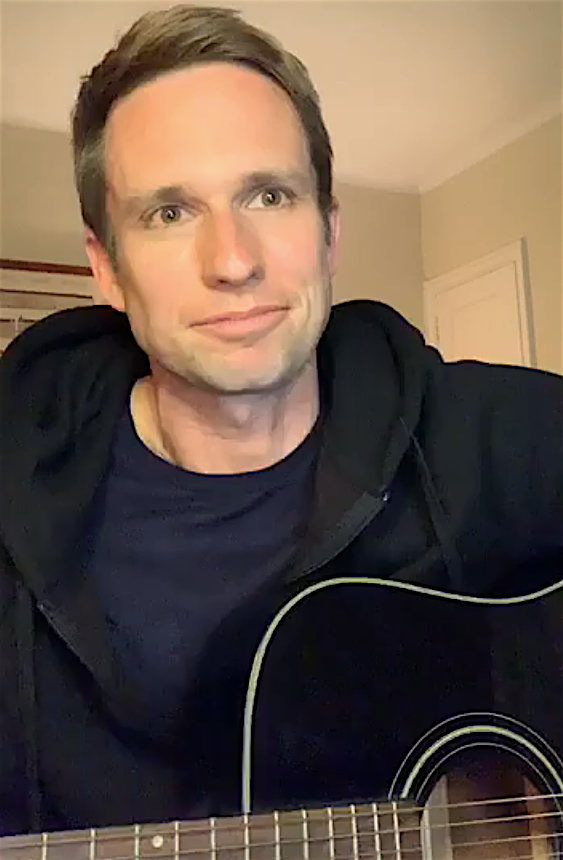 During a Facebook Live session back in April, beginner guitarist Erik Bottcher wowed the lockdown crowd with a "name that tune" contest featuring "Let It Be," "Creep" and "Where Have All the Flowers Gone." It might not exactly have won him Local 802's endorsement — but, hey, it couldn't have hurt. (Photo by The Village Sun)

On Monday, the union announced it has endorsed Bottcher for City Council in District 3, citing his commitment to reviving the arts economy and his activism.

Council District 3, which includes the Village, Chelsea and Hell’s Kitchen, is the home of Broadway and thousands of musicians, many of whom are Local 802 members.

“For the City Council seat representing our home turf, we are proud to endorse Erik Bottcher,” Local 802 said in a statement. “He has an impressive track record of community engagement and organizing, advocacy for LGBTQ+ rights and the rights of marginalized populations, as well as a depth of knowledge and experience afforded to him as the current Speaker Corey Johnson’s chief of staff.

“His work under Governor Andrew Cuomo to organize across New York State was instrumental in passing the Marriage Equality Act of 2011, preceded by years of activism on behalf of LGBTQ+ and transgender New Yorkers.

“He has fought for affordable housing and tenants’ rights in District 3, where many of our members also live. He has committed himself to labor rights, as well, recently standing in solidarity with Chipotle workers as they walked off the job protesting unsafe working conditions. Above all, he believes in the vitality of arts and arts education. We feel he is an outstanding leader to navigate the difficult months and years ahead as we rebuild Midtown and Downtown as the global hub for music and entertainment.”

In his campaign platform, Bottcher is demanding billions of dollars from federal, state and local government to help the arts and culture sector, one of the primary drivers of economic activity in the Big Apple. For arts workers out of jobs, Bottcher said he would fight for extended unemployment insurance and other assistance in this difficult time. He also vowed, if elected, to stand with arts workers against employers who may seek to exploit the COVID crisis by weakening contracts and cutting wages, benefits and protections.

“I am incredibly honored to receive the endorsement of Local 802, which represents so many of my neighbors,” Bottcher said. “The COVID-19 crisis has caused unimaginable economic devastation in the arts sector. Our government needs to step up to the plate for musicians and other arts workers who have been out of work for nearly a year. I will work with Local 802 and all stakeholders to rebuild our arts economy and ensure that the recovery is just and equitable, providing good-paying jobs for New Yorkers. We need leaders who understand that the arts are part of New York City’s DNA and must be nurtured and celebrated.”

Local 802 American Federation of Musicians represents more than 7,500 highly skilled musicians. Its members perform on Broadway, at Lincoln Center, Carnegie Hall and Radio City, on late-night TV shows and in other televised bands, as well as in hotels, clubs, festivals and venues across New York City.