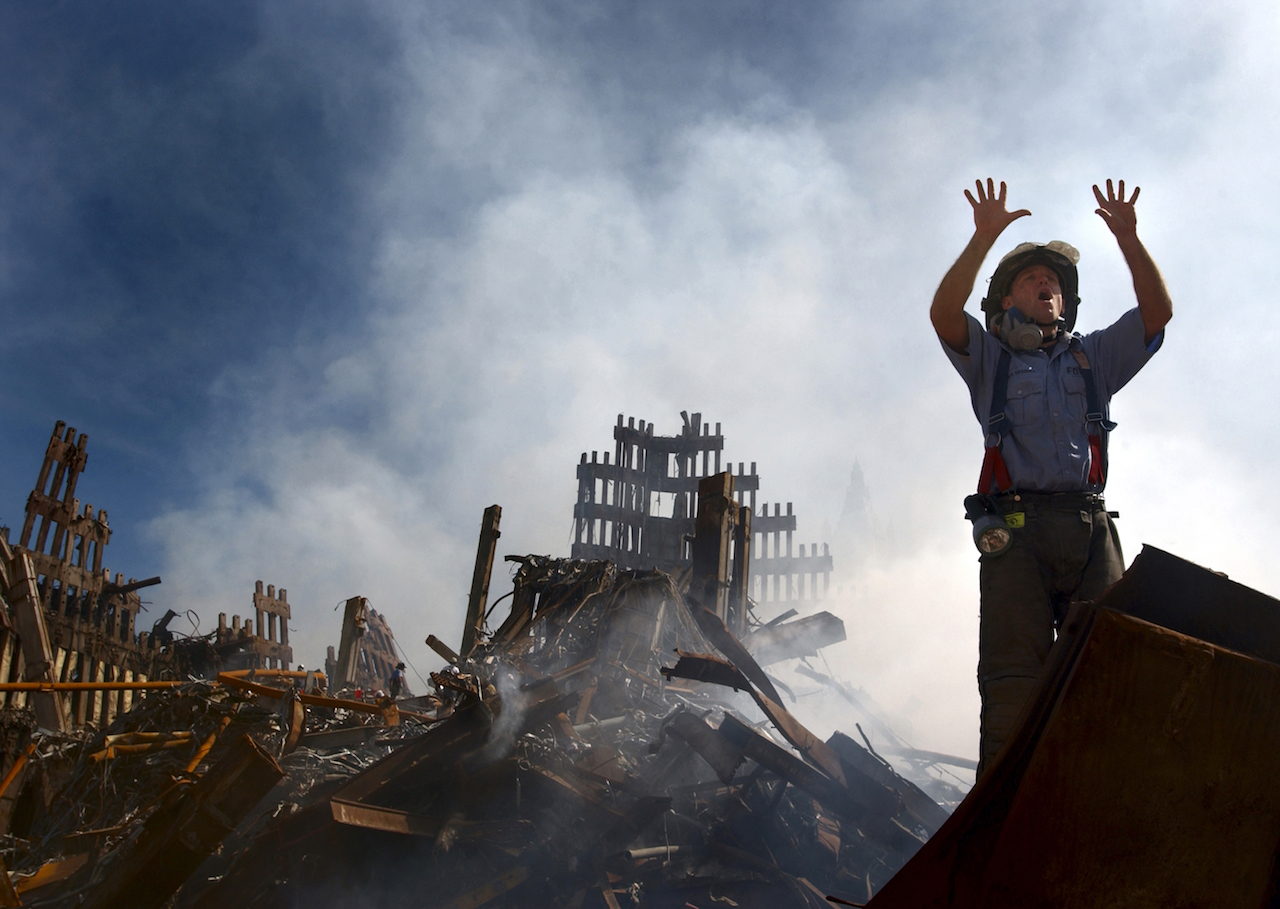 Four days after Sept. 11, 2001, a firefighter called for 10 more rescue workers to make their way into the rubble of the World Trade Center. (Photo by Preston Keres, U.S. Navy journalist first class)

Frank Morales, a former pastor at St. Mark’s Church in the Bowery in the East Village, wrote this piece on Dec. 8, 2001, after visiting Ground Zero following the 9/11 attack. He dedicated it to John Lennon, the former Beatle and peace activist.

BY FRANK MORALES | A few days after the destruction at the World Trade Center, I received a call from a staff person at the Cathedral of St. John the Divine, who asked me if I, being a priest, would be willing to journey down, through all the militarized checkpoints that had been set up immediately following the bombings, to perform last rites for the dead.

She said that my name had come up in discussions as somebody who might have the stomach for such an assignment. I instantly accepted, taking the 11 p.m. to 7 a.m. shift, feeling, probably like a lot of people, that I could be useful there, that I could help. Little did I realize then that it was I who would be helped, that it was I who would gain so much from the wisdom that was smoldering there.

Walking down lower Broadway into the heart of darkness, I could clearly smell the stench of death, a perfume, I thought later, of a sacrificial fire, a human pyre, deeply sacred in its essence. How was I to know this wisdom locked within that incomprehensible scene?

After a while, I passed through the last of the checkpoints manned by National Guard people, at which point I was escorted to a series of tents set up along the Hudson River, facing due east, situated in the belly of the monster.

I stood, along with dozens of firemen and construction and rescue workers, within what often appeared to be some kind of opera set. In front of me, a full 180-degree semicircle, floodlit in the dead of night, I could see the entire devastation, spiked remains of the South Tower, whose lower portion reminded me of the Parthenon, an earlier testament to a doomed civilization. To the left was a 2,000-degree pit, the infernal ruin of the North Tower.

The entire deathscape cast in front of me, sitting in my director’s chair, in a remake of “Apocalypse Now,” I could see the tiny machines and men traverse the mountains of twisted steel and rich brown earth, the whole picture so large as to defy comprehension.

Standing there, I was approached by a fireman, a fortyish football player-looking guy from Queens. This fireman, whose name I never got, told me he’d been there since immediately after the catastrophe. He told me that the wives of his friends buried somewhere beneath the burning toxic earth were calling him every day and asking him if he’d found their husbands yet. He looked at me and said, “I know I’m going to lose 10 years of my life here, but I can’t let my buddies down. I can’t go.”

Recognizing that I was somewhat overwhelmed by the spectacle of devastation all around us, he said to me, “Father, you don’t see any chairs or tables, no desks, do you? All you see is steel and earth.

As he said this, he motioned me to examine the soil that I was standing in. It was rich and moist, enriched with the ground-up bodies of the dead. My feet inside my boots began to tingle.

At this point, recognizing that I had truly arrived in hell, I was moved to utter in his presence, possibly for his benefit, “Hey, if I had somebody in this mess, I’d be pissed as s—, and yeh, I’d wanna get those mother f—ers,” at which point he put his hand on my shoulder and whispered, “Hey, it’s not about that.”

“You wanna know something,” he said, drawing near to my ear, “Bush and bin Laden have the same banker.”

I was stunned by his grasp of current events. (Another fireman would later advise me that the whole situation was one of “rich people fighting over oil with all of us caught in the middle.”) What I came to recognize slowly was that the message of these men and women who were rubbing shoulders with the dead 24/7 was quite at odds with the then-prevailing ethic — that it made no human sense to inflict what was in front of us on anyone else.

For beneath the uninformed M.O. of the long-distance bomber and the long-distance armchair warrior is a lack of appreciation of death up close. Living with the dead, squeezing their bloody acre between your fingers, lifting small bits of fingers from beneath your boots, placing the pieces in red plastic seal-up “one-pound bags,” one loses the ability to replicate the violence, loses the desire to duplicate that which one becomes akin to, namely the murder of innocent people.

In other words, for the people at Ground Zero, death was real, and hence not to be taken lightly.

All night I found no one who was in any kind of mood to inflict that which we were living in on anyone else. It was instinctually not viable. Slowly, the lesson of Ground Zero dawned on me, the lesson that the vicious circle of violence breeding violence was passé here, a bad joke hoisted upon a dehumanized complicit public, unsupported by those in the know at the ground zero of moral wisdom.

Of course, this explains the documented inability of many soldiers during World War II to kill another, even the manufactured “evil one,” in a direct one-on-one confrontation. (See “On Killing,” by David Grossman, 1996.) And yet, while we do all in our power not to kill, we are manipulated into pulling the trigger — they kill in our name.

Truth is, killing and humanity (who we are) are opposites, and the guys at Ground Zero knew this better than anyone, and this was their message: “Hey, Father, tell them out there that they should organize buses for people to come through here, everyone should see this.” They said, everyone should get this inoculation against the sheep-like murderous idiocy that was rising like the smoky spirits of the dead from the ruins in front of me.

As dawn approached, men covered in the gray-brown soot which was everywhere approached me and, as if in a fit of elation, mentioned that they had found an intact body of a young girl. Given the circumstances, this was cause for muted celebration. I tagged along with them to the boiling 2,000-degree pit that was the North Tower.

A cherry picker emblazoned with an American flag fitted with the image of a Native American with peace pipe lowered in the lonely place of death to retrieve the girl, who looked to be a teen, in a striped dress, raised her from the dead, resurrecting her identity and placing her at my feet.

We gathered there among the smoke and flames and despite the inescapable stench prayed for her spirit, her family, for one another, for this broken world, in this exiled place.