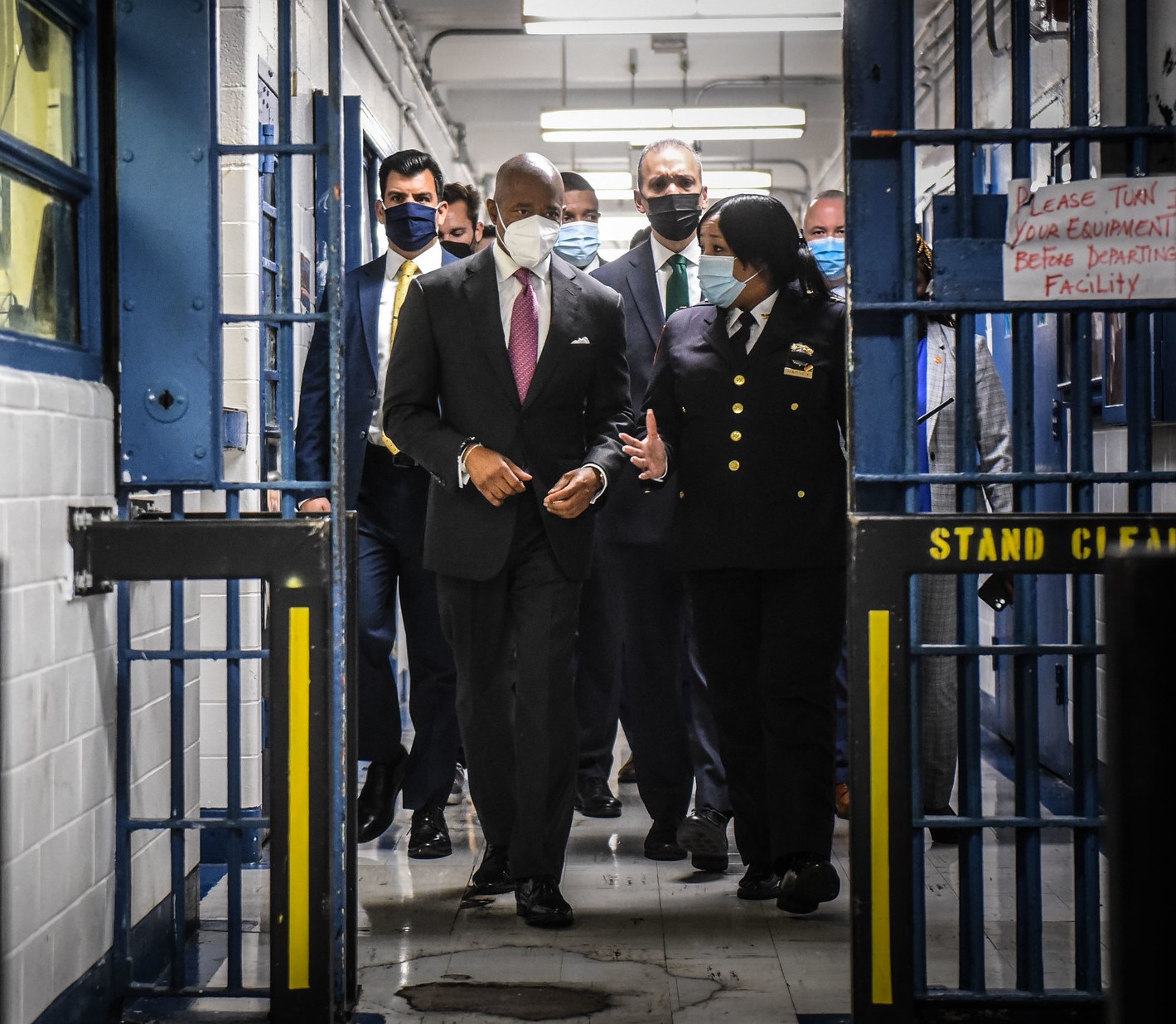 Mayor Adams toured Rikers Island in June. Behind him to the right is Louis Molina, the Department of Corrections commissioner. (Photo by Michael Appleton/Mayoral Photography Office)

Mayor’s op-ed: After decades of dysfunction, Rikers reform is underway

BY ERIC ADAMS | When I came into office as New York’s 110th mayor, there was no question that the city’s main jail, Rikers Island, was in serious need of reform and repair. Anyone who has set foot in Rikers in years past, from family members to Correction officers to those awaiting trial, has seen with their own eyes what decades of disinvestment looks like: peeling paint, crowded facilities, unsafe conditions for staff and detainees alike.

Decades of mismanagement and neglect had created a culture of dysfunction that became normalized. Staffing shortages, assaults, deaths and drug overdoses were on the rise and became even worse during the COVID-19 pandemic.

And while there are no quick or easy solutions to reforming Rikers, I can tell New Yorkers this: The era of neglect is over, and the era of reform is underway.

My administration is moving quickly to address these issues, and under the leadership of Commissioner Molina, we are already seeing results. Through the Rikers Anti-Violence Action Plan and the Rikers Task Force we are making our jails safer, more humane and more functional, while working to reverse decades of neglect.

We are addressing staff shortages and investing in our workforce, upgrading the jails infrastructure, and taking steps to reduce violence behind bars. This year we have seen reductions in slashings and stabbings at the department’s young-adult facility the Robert N. Davoren Center (RNDC), reductions in use-of-force incidents and assaults on staff and increased searches for weapons and drug contraband.

Though we are only 10 months into this new era, Commissioner Molina and the Task Force have already been singled out in the latest Nunez Monitor Status Report for their efforts to make progress. The latest report, released just last week, stated that the Task Force has “effectively resolved a number of issues that required multiagency collaboration and cooperation.” The report also praised the commissioner’s hiring decisions, clear mandates and courage to make unpopular yet important changes.

We know that a tremendous amount of hard work lies ahead in order to make our jails safer, but I’m proud that the report recognized the work that Commissioner Molina and his team have already done within a short time.

We must give people the protections of the law as we enforce the law, whether they are serving time or awaiting trial. And we must protect those who work one of the toughest jobs in this city and the nation. New York’s Boldest must have the resources to protect themselves and the respect of all of those who rely on them to protect our city. Our Correction officers work 12-to-16-hour tours, in a challenging and often stressful environment, yet they do their jobs with dedication and honor. They are sometimes assaulted and face violent incidents. Our system must work for those who are incarcerated and the Correction officers and non-uniformed staff who care for them.

We must do more for our staff and persons in our custody. And we must address the root causes of violence and crime. For far too long, the response to this crisis has been downstream rather than upstream solutions.

I have often said, “If you do not educate, you will incarcerate.” But once they are incarcerated, we cannot give up on people. We must do all we can to support and rehabilitate those who come through our system. That is why, for the first time, we will be testing everyone who comes through Rikers for dyslexia and providing support to those who need it.

We know that 48 percent of inmates at Rikers Island have mental health issues and that 40 percent are dyslexic. Eighty percent of the men and women on Rikers don’t have a high school diploma. We see the same young people continue to be arrested over and over again, but we don’t get them the interventions they need to succeed. We must break the cycle of incarceration with education, support and opportunity. We must go upstream and keep our young people from falling into the river of violence.

Change does not happen overnight, and decades-long problems will not be solved in the first year of this administration. But we have established a blueprint for real change, and we will not let this opportunity for change pass us by. We will continue to work with the Federal Monitor in achieving the Action Plan’s goals, and toward the goal of a safer and more humane jail system for all.