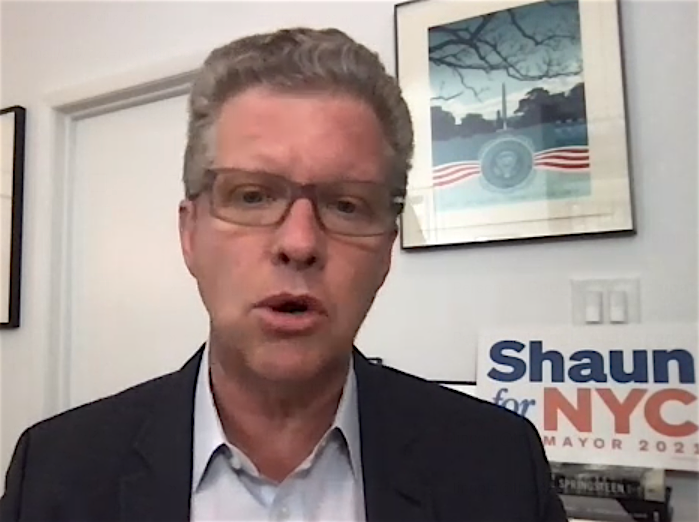 BY LINCOLN ANDERSON | A candidate for New York City mayor says the fiasco of the East Side Coastal Resiliency plan is exactly why he is running.

Shaun Donovan, a veteran top housing honcho of both the Obama and Bloomberg administrations, made the remarks at a Zoom candidates forum hosted by the Downtown Democratic political clubs on Sunday afternoon.

During a Q&A session, he was asked about his position on the current E.S.C.R. plan.

The candidate responded that a top-notch community-approved plan — which had been created, in fact, while he was working at City Hall — had been in place, but that the process subsequently fell into a “black hole” under Mayor de Blasio.

Then, out of that “black hole,” a completely new plan, though not one vetted by the community, suddenly emerged.

Under de Blasio’s contentious E.S.C.R. plan, East River Park, which stretches between E. 13th and Jackson Sts., would be raised from 8 to 10 feet by burying it under tons of new soil. More than 1,000 trees would be razed under the scheme, with much of the park being offline for years at a time during the construction.

That de Blasio did not follow a community process for this mega-project reflects a “fundamental problem” of the mayor’s administration, Donovan said. On the other hand, he said, the earlier iteration of the plan, spearheaded by the firm Rebuild By Design, was an example of doing community engagement the right way.

“We had engaged Good Old Lower East Side,” Donovan said. “We had a plan that truly represented what the community wanted. That was a plan that came out of deep community engagement [and working with coastal-resiliency experts].

“That’s something that, honestly, is why I’m running,” he said.

Good Old Lower East Side, also known as GOLES, is a leading East Village/Lower East Side housing and community-organizing group. During his opening remarks, Donovan also name-checked Damaris Reyes, GOLES’ executive director — who was actively involved in the earlier resiliency project’s planning — as someone he had worked with while at H.P.D.

Basically, the earlier plan simply called for a landscaped earthen berm to be built up along the east side of the F.D.R. Drive to prevent the kind of flooding of the surrounding neighborhood that was seen during Hurricane Sandy in 2012.

But when the current administration scrapped the Rebuild By Design plan, Donovan said, “The city went into a black hole, didn’t consult with community members and moved away from that [previous] plan.

“I would have stuck with the old plan,” he declared, “and I would have implemented it much quicker to protect neighborhoods from storms, which could be imminent.”

Meanwhile, Maya Wiley, another mayoral candidate who spoke at the forum, answered in generalities when asked about E.S.C.R.

“I think that’s a critically important question,” she said.

She said parks are a key part of the community but that “we also have rising sea levels.”

Wiley said she supports a “Green New Deal model” for New York City. She said, if elected, she would “work in partner with community on solutions” for preserving open space.

But she did not specifically say whether or not she supports the E.S.C.R. plan being pushed by her former boss.

A lawyer and civil-rights activist, Wiley is a former counsel to de Blasio and currently senior vice president for social justice at New School University.

Similarly, when asked by Joseph Reiver, the executive director of the Elizabeth St. Garden, about the de Blasio-backed housing project currently slated for the Little Italy green oasis, Wiley did not indicate she would deviate from the mayor’s position. Reiver specifically asked her if she would support shifting the project to a vacant, city-owned site at Hudson and Clarkson Sts., where five times as much affordable housing could be built.

She said that, if elected, she would hope to find more alternate sites for open space.