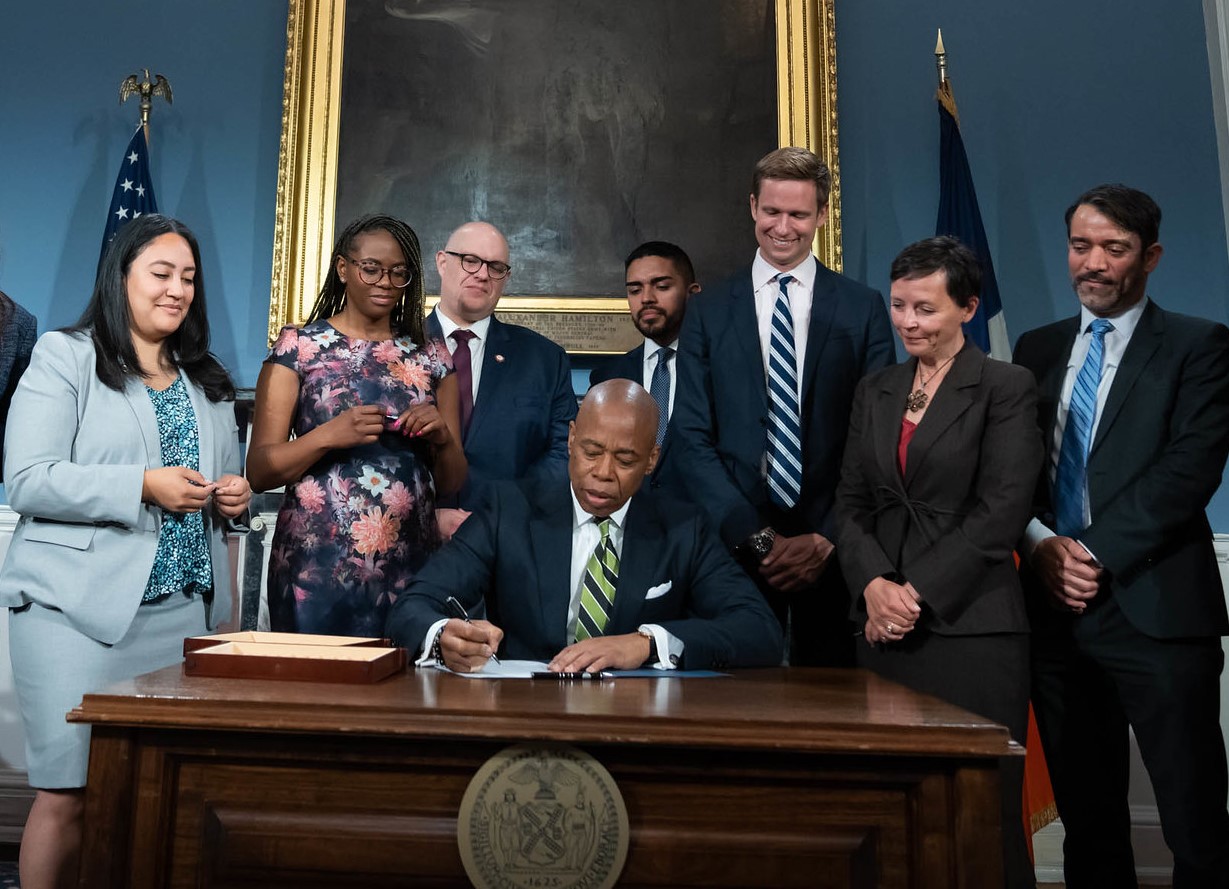 Mayor Adams signed legislation at City Hall on May 12 establishing the two new BIDs. Brooke Schooley, the head of the new West Village BID, is second from right. (Photo by Ed Reed / Mayoral Office of Photography)

BY THE VILLAGE SUN | Mayor Adams got down to BID-ness on Thursday, signing laws to establish two new business improvement districts, including one in the West Village.

The other new BID is in the Bronx’s Castle Hill neighborhood.

As The Village Sun first reported back in January, the West Village BID will focus mainly on supplemental sanitation services and also promoting the area’s rich “cultural history,” possibly through walking tours. Community Board 2 gave its approval to the planned BID at the end of last year.

The new BID’s boundaries, as of January, were proposed as Perry Street and Charles Street on the north, Greenwich Avenue and Sixth Avenue on the east, Carmine Street and Leroy Street on the south, and Hudson Street on the west. It wasn’t immediately clear if there had been any major changes to the district’s lines since then.

“Small businesses, we hear over and over again, they are the heartbeat of our community, and for far too long, they have been overlooked,” Adams said before O.K.’ing the two BIDs. “We must figure out how we keep the doors open, and that’s my commitment and promise.

“We are ensuring that the BIDs are launched this July in time for the start of the fiscal year, so businesses in Castle Hill and the West Village can thrive,” he added. “We cannot have an economic recovery unless our neighborhoods recover at the same time. And this is a huge win. And for all those who have advocated for this, we heard you, we’re responding, and that is how government should work when you get stuff done.”

Councilmember Erik Bottcher and Brooke Schooley, the chairperson of the West Village BID’s Steering Committee, were on hand for the law’s signing.

The plan is for the West Village BID to have a relatively small annual budget — around $600,000.

Commercial properties will be assessed a tax for the BID of $1,200 per year. The assessment will be made on owners’ property tax bills.

Speaking earlier this year, David Gruber, a former chairperson of Community Board 2, said the BID would really help out with garbage on the streets, such as pizza plates and boxes jamming up the trash cans around the popular Joe’s Pizza on Carmine Street on his block.

“It’s really like a neighborhood improvement district,” or a NID, as opposed to a BID, he said. “I can’t wait,” he said of the nonprofit organization’s formation.