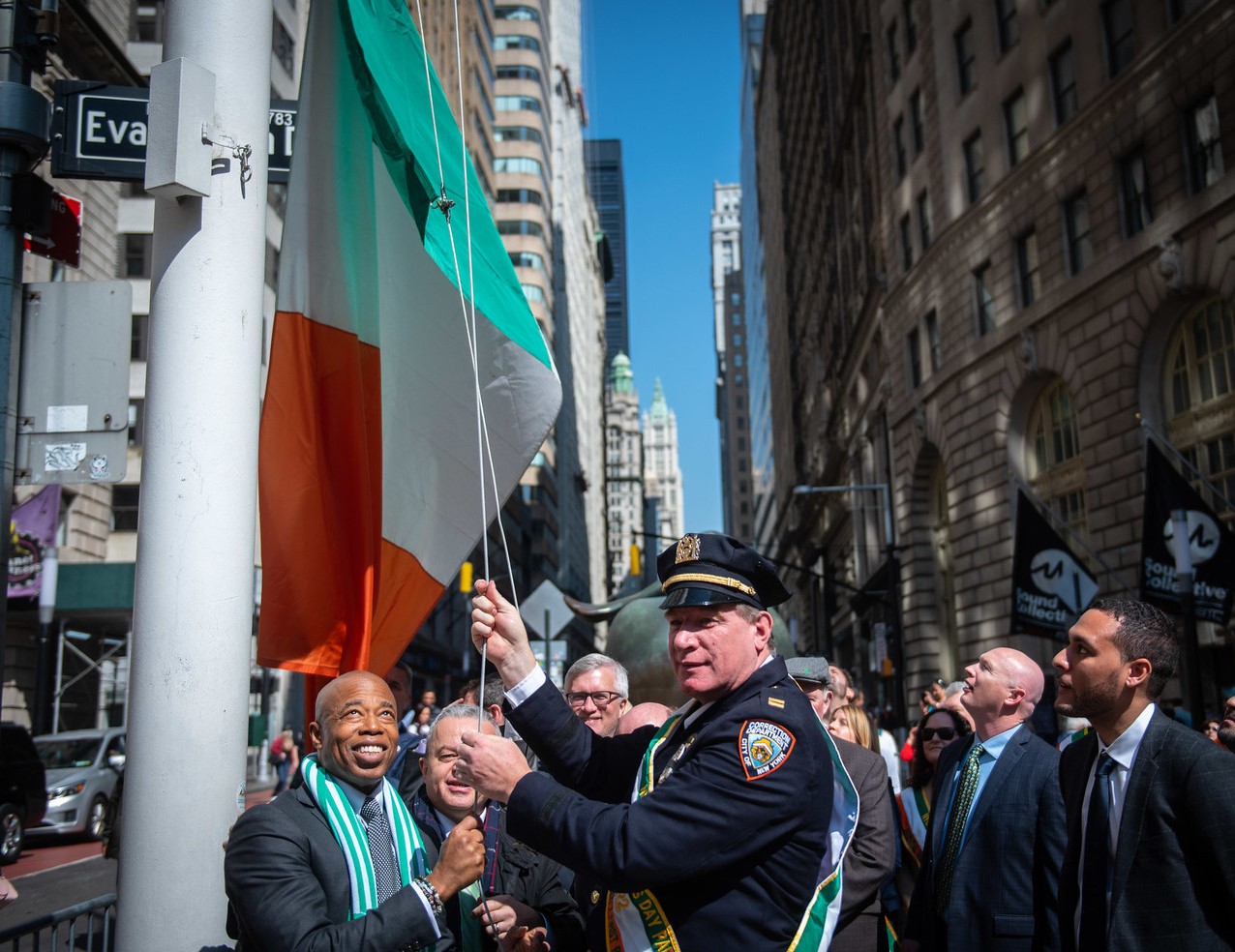 BY THE VILLAGE SUN | Mayor Adams on Wednesday raised the Irish flag with St. Patrick’s Day Parade officials and local politicians at Bowling Green Park in honor of the first Irish immigrants who arrived in New York City.

“New York City is a city of immigrants, rich in its culture and diversity, and our Irish brothers and sisters have contributed to our city’s history for generations,” Adams said. “This St. Patrick’s Day, we honor those Irish immigrants who relocated and helped build our city and the many Irish Americans who serve New York City to this day. Today, we celebrate the fighting spirit of the Irish with the courage and resilience of this entire city.”

“New York City would not be the same without the generations of Irish immigrants who have come to our city throughout our 400-year history,” said Assemblymember Robert Carroll, who represents Brooklyn’s Windsor Terrace and Kensington neighborhoods. “Irish immigrants started the St. Patrick’s Day Parade in 1762 and sparked a tradition that doesn’t just celebrate Irish culture but helped create a space for other immigrants to come to our great city and celebrate their own heritage. I commend Mayor Adams’s celebration of New York’s first Irish immigrants at Bowling Green today.”

“I’m proud to represent District 1 in the City Council because it’s the oldest part of our city, meaning it was the first home to wave after wave of immigrants,” City Councilmember Christopher Marte said. “Celebrating St. Patrick’s Day here honors the Irish immigrants who made Lower Manhattan their home, and whose contributions to our city we still benefit from.”

“Bowling Green’s rich history dates back to the very founding of New York City in the 1600s,” said Arthur Piccolo, president of the Bowling Green Association. “Like so many others, immigrants came to what is now Bowling Green Park in search of a better life. Mayor Eric Adams raising the Irish flag today on the eve of St. Patrick’s Day is a reminder of the vast contributions Irish immigrants have made to our great city.”

“Thursday will mark a new beginning for New York City and the country as we host the first major celebration since the pandemic started in 2020 — the 261st New York City St. Patrick’s Day parade on Fifth Avenue,” said Hilary Beirne, chairperson and parade chief administrative officer of the St. Patrick’s Day Parade Foundation. “We dedicate the parade to labor and the victims of the pandemic. The parade, like spring, which is just around the corner, will mark the renewal of life in the city post-pandemic. We look forward to greeting everyone on Fifth Avenue in the greatest parade in the world, which is in the greatest city in the world, as a sign of a new beginning.”