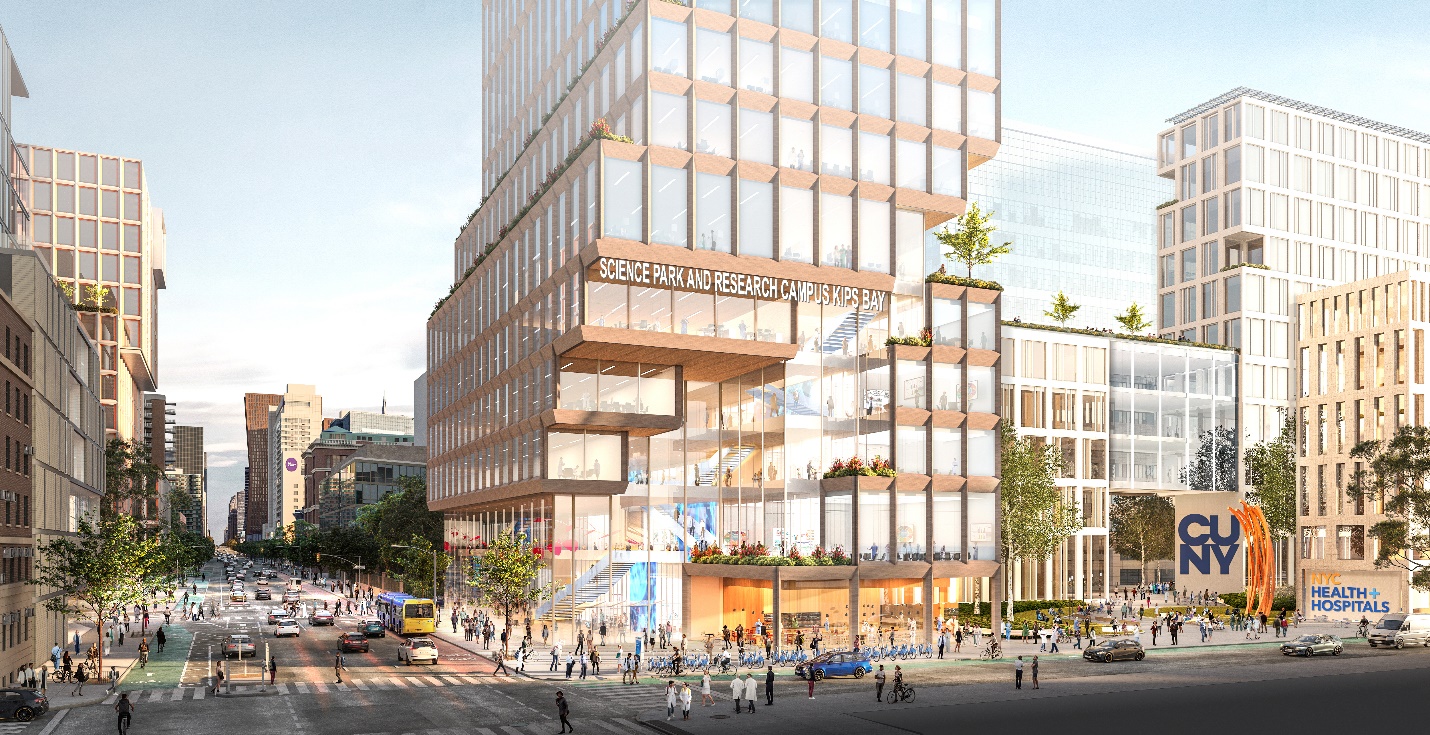 A design rendering of what SPARC Kips Bay might look like, viewed along First Avenue looking toward Uptown.

BY THE VILLAGE SUN | Mayor Eric Adams and Governor Kathy Hochul on Thursday unveiled plans for the new Science Park and Research Campus (SPARC) Kips Bay, a jobs and education innovation hub that will be the first-of-its-kind in the state.

Slated for the full-block site of Hunter College’s current Brookdale campus, at First Avenue and 25th Street, SPARC Kips Bay will cost $1.6 billion and be funded jointly by the city and state with additional investment from the private sector in life sciences. SPARC Kips Bay is expected to break ground in 2026 and be completed by the end of 2031.

SPARC Kips Bay will be anchored by new, modern facilities for more than 4,500 students from the Hunter College School of Nursing and School of Health Professions, the City University of New York Graduate School of Public Health and Health Policy and the Borough of Manhattan Community College’s multiple healthcare programs.

The healthcare hub will also feature:

The intent is for SPARC Kips Bay to help New York City become a global leader in creating and attracting accessible jobs in life sciences (molecular biology), healthcare and public health by creating a pipeline from local public schools to careers in these growing and critical fields.

Through a partnership with CUNY, SPARC Kips Bay will generate an estimated $25 billion in economic impact to the city over the next 30 years; create 10,000 jobs, including 2,000 permanent jobs; and transform Hunter College’s Brookdale campus into new, state-of-the-art teaching and commercial facilities.

The project will transform an entire city block — creating more than 1.5 million square feet of academic, public health and life sciences space, more than doubling the life sciences footprint in Kips Bay — plus rebuild an accessible pedestrian bridge on E. 25th Street connecting to the East River, the greenway and the Waterside Plaza residential complex.

This public-private partnership follows commitments from Mayor Adams’s “Rebuild, Renew, Reinvent: A Blueprint for New York City’s Economic Recovery” and his first State of the City address delivered in April.

The SPARC project is intended to add to the already-booming life sciences “ecosystem” in Kips Bay, which has seen more than $2 billion in investment in the last 15 years.

“This new Science Park and Research Campus in Kips Bay will be not only a hub for the life sciences industry and an anchor for the neighborhood, but also a bridge to the future for our city’s young people,” Adams said. “SPARC Kips Bay will transform an entire city block into a state-of-the-art destination for the life sciences industry and be a place where workforce development, economic opportunity and public health come together seamlessly — attracting businesses and uplifting New Yorkers to bring our city back stronger than ever with $25 billion in new economic activity for our city over the next three decades. Thank you to all our partners for the vision and teamwork to ‘Get Stuff Done.’”

“Thanks to this agreement with the city, SPARC Kips Bay will give New York’s life sciences sector a major boost, creating thousands of high-paying jobs, investing in education and making New York the place where miracles are made,” Hochul said. “My administration remains laser-focused on saving lives and making New York the home of the transformative fields of the future, and with this project, we will achieve both of these goals at the same time.”

SPARC Kips Bay will create a single campus with space for the city’s Department of Education, CUNY, health and biotech companies and public health institutions. CUNY will specifically offer accessible degrees and continuing-education programs in public health and medical research, including for young New Yorkers inspired by COVID-19 responders and researchers who helped develop vaccines.

Construction of the campus will create an additional 8,000 good-paying construction jobs.

“SPARC Kips Bay represents a path-breaking approach to economic development in New York City where we create clusters in which commerce and schools work side-by-side to provide career pathways for CUNY and D.O.E. students in the innovative sectors of today and tomorrow,” said Andrew Kimball, president and C.E.O. of the New York City Economic Development Corporation.

“The New York City region is leading the nation in life science jobs and, with this project, we will continue to run up the score,” said Dan Garodnick, director of the Department of City Planning. “This new hub is perfectly situated in a healthcare corridor that includes hospitals, labs, schools and public health facilities, in a city that has all the talent to bring new innovations to life. This is transformative for the neighborhood and a huge win for New York.”

Over the next year, the city and E.D.C. — working alongside the state and CUNY — will lead a master planning process to create a conceptual site plan that will identify the site’s infrastructure needs — involving open space, urban design and potential zoning changes needed for the project. According to a press release announcing the project, “The planning process will be informed by community engagement and subject matter experts, and supported by the architectural, urban planning and engineering firm Skidmore, Owings & Merrill.”

“For years, this community has advocated for a major life sciences center at this site, and I’m thrilled that the day has finally come,” Congressmember Carolyn Maloney said. “There is no better place to be siting a state-of-the-art life sciences educational campus with some of the best medical schools, public hospitals and research centers in close proximity. If we want to continue to be national leaders in the healthcare professions, we need to be making these types of investments.”

“This effort will strengthen healthcare and career opportunities in New York, especially in combination with New York’s expansion of the Diversity in Medicine program,” said Assemblymember Richard Gottfried, the chairperson of the Assembly’s Committee on Health. “This is also an important investment in public education and public higher education.”

“After years of uncertainty over Brookdale’s future, today represents a big opportunity for New York City,” Councilmember Keith Powers said. “As this process continues, I look forward to receiving public input, reviewing this proposal with my colleagues, and having important conversations with the community.”

“Manhattan Community Board 6 has long been advocating for a modernization of the Brookdale site and is delighted that our leaders are heeding our calls and proceeding in a new and forward-looking way,” said Kyle Athayde, chairperson of Community Board 6. “Community Board 6 is also glad to see that the plan includes some community improvements, which we have advocated for throughout the years, such as an ADA-accessible pedestrian bridge over the F.D.R. Drive to Waterside Plaza.”

“We’re gratified that the partnership between New York State and New York City will utilize the Brookdale site to expand the existing health and bioscience corridor between 23rd Street and 34th Street,” said Susan Steinberg, president of the Stuyvesant Town–Peter Cooper Village Tenants Association. “We look forward to this collaboration providing for education, training, and medical services that will benefit the community.”

“The Waterside Tenants Association is very pleased to learn of the redevelopment plans for the Hunter Brookdale campus, which will bring a new high school and professional training program to the community and high-quality jobs,” said Janet Handal, president of the Waterside Tenants Association. “We are especially pleased that a new ADA-compliant footbridge connecting Waterside to 25th Street will be built as part of the project. We look forward to working with E.D.C. on the community planning process to ensure the concerns and needs of the community are incorporated into the master plan.”