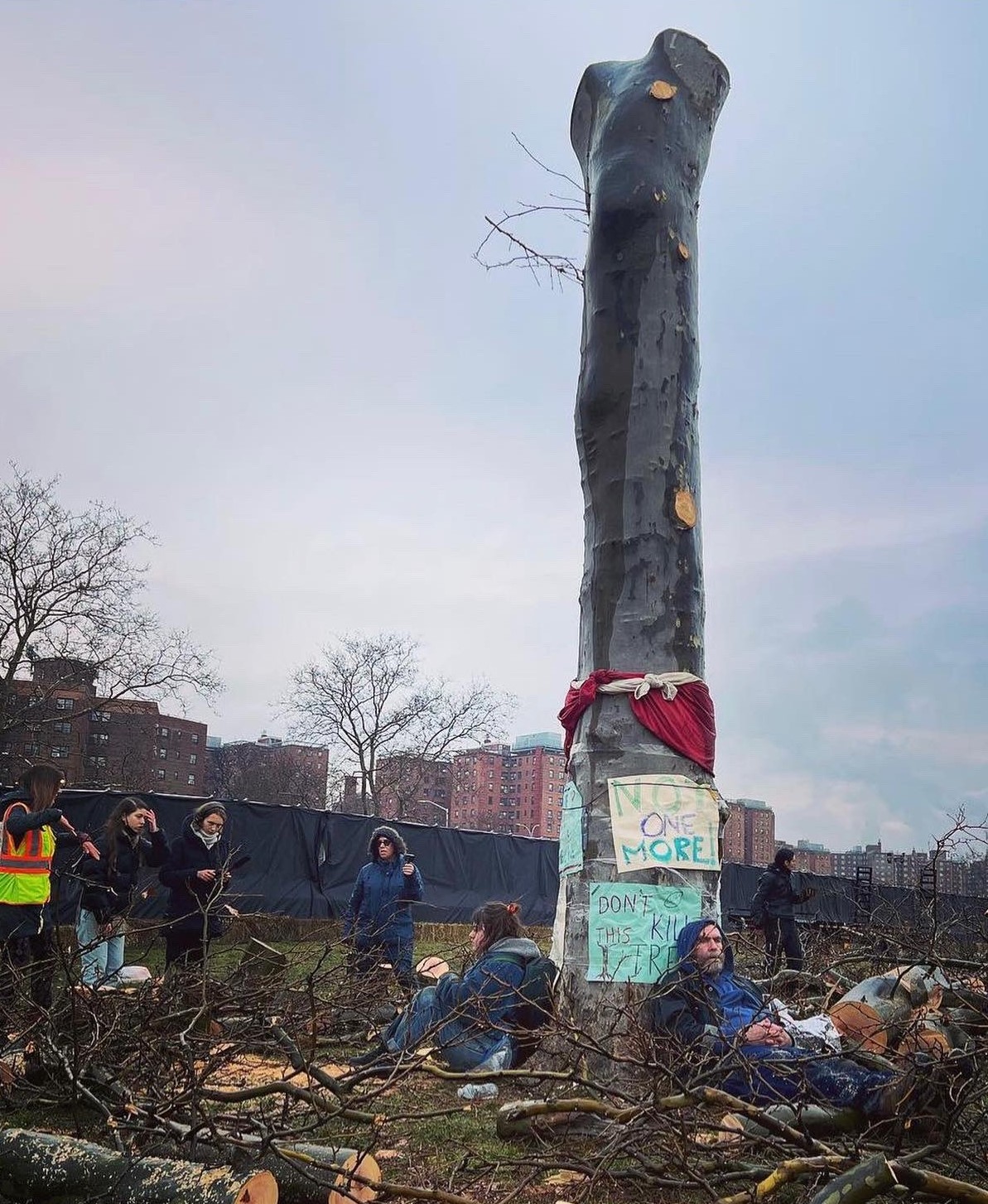 Tree defenders sat around all that was left of Mathilde last week after she had been mostly cut down. (a thousand people a thousand trees / Instagram)

BY CHARLOTTE MORLIE | On Wednesday evening, Jan. 11, the tree was still standing, both beautiful and weird looking, with its slight bend and leafless winter branches. By 8 o’clock on Thursday morning, all that was left to see was a desolate trunk standing behind construction fences covered with black fabric.

A group of protesters got there before the workers could start sawing the trunk. They gathered around the tree, singing songs, delivering messages and protecting the trunk with their bodies. They stood there for almost three hours under the rain, until a dozen police officers showed up and arrested two of the protesters, or “tree defenders,” Sylver Pondolfino and Savitri D.

The tree was an 83-year-old London plane, one of the most adaptable and resilient species for urban environments, which had survived Sandy in 2012. But it did not survive the East Side Coastal Resiliency project, the city’s $1.45 billion plan to completely raze East River Park, and build a new park on top of 8 to 10 feet of landfill to mitigate against future flooding.

The E.S.C.R. project was approved in 2018 under Mayor Bill de Blasio in a sudden change of plan. The reversal came after years of community meetings and workshops had led to a very different design, one that was meant to keep most of East River Park intact. Instead the new plan’s goal is to make the park a seawall-like barrier.

Seven hundred trees have already been destroyed to clear the way for the promised elevated park, and activists have been showing up for each of them.

“For each tree they want to take down, they will have to struggle to take it down,” said Sylver, one of the two arrestees.

There is a painful feeling of repetition for many of these protesters: The demolition crews show up, protesters interfere, the police arrive, arrest a few of them, and then the cutting down continues.

But this specific tree felt different. Affectionately named Mathilde, Mathilda or Fire Tree by local residents, it held a special place in the community.

“This is my favorite tree,” said Harriet Hirshorn, one of the organizers of East River Park Action, which opposes E.S.C.R. “We were told that they would at least silver tag the trees for reuse. But they come with the mulcher and they just mulch away. Speak of eroding trust.”

Less than 15 minutes later, the tree known as Mathilde is down and being dismantled.

On Wednesday and Thursday mornings, the collective 1000people1000trees, an offshoot of ERPA, organised a “Press Conference for a Tree” to bring attention to the upcoming chain-sawing of Mathilde. People gathered and spontaneously started sharing stories of their connection to the tree and the park. A woman broke down in tears when explaining that her baby had taken his first steps next to this specific tree.

Ana Anu Wyssman is a multimedia artist with a background in sustainability consulting for cities and businesses. She pointed to the issues of legality when it comes to uprooting these trees.

“The cutting down of Mathilde is an ecocide, and is in violation of environmental protection laws and in direct conflict with sustainability goals that the city has committed to,” she charged.

Wyssman pointed to the fact that there was an active nest in the tree, and that no permit was shown to take it down. She feared that this will create precedent for more tree cutting in the city, with little legal oversight.

“Trees don’t have real estate value,” she said. “They are not going to pay off in anything but clean air. We need more robust conversations about how we attribute worth. We know we live in an interdependent ecosystem, and to think that trees are a disposable species is frankly ignorant.”

Planting new trees is part of the new elevated park plan. But this will take time and the capacity of young trees to sequester carbon is considerably less than that of an old tree like Mathilde. Some of the protesters express doubts over what the new park will actually look like and fear it will become another Battery Park or Domino Park, a real estate development space, having lost all its specific character.

There are 504 trees left in East River Park, according to Savitri D, one of the two arrestees. The city promised to keep 42 percent of the existing park untouched until the first demolished part gets rebuilt. This was a concession so that the local community could still benefit from at least some of the green space while the construction is underway — especially the public housing residents bordering the park and the F.D.R. Drive, who are at most at risk of flooding and most impacted by air pollution.

But Savitri fears that the cutting of Mathilde and the moving of workers into the ball field could mean yet another broken promise.

“There is a no-decision momentum,” she said. “The project just does what it wants, regardless of whether the agreements with the constituents are being honoured.

“We tried all kinds of different strategies,” she added, “lawsuits, arguments about endangered species, community health, air pollution, but it couldn’t compete with this many billions of dollars. So you don’t really have anywhere to turn, except for direct action and protest.”

This is a fight over much more than a single tree. Ultimately, it’s about competing visions of what it means to build “sustainable cities” and how to involve communities in the process. Mathilde, the tree, and the park she used to stand in, remind us of how meaningful the public spaces at the heart of these debates are. Honoring their specific human and nonhuman histories will have to be part of the process of remembering and mourning them.