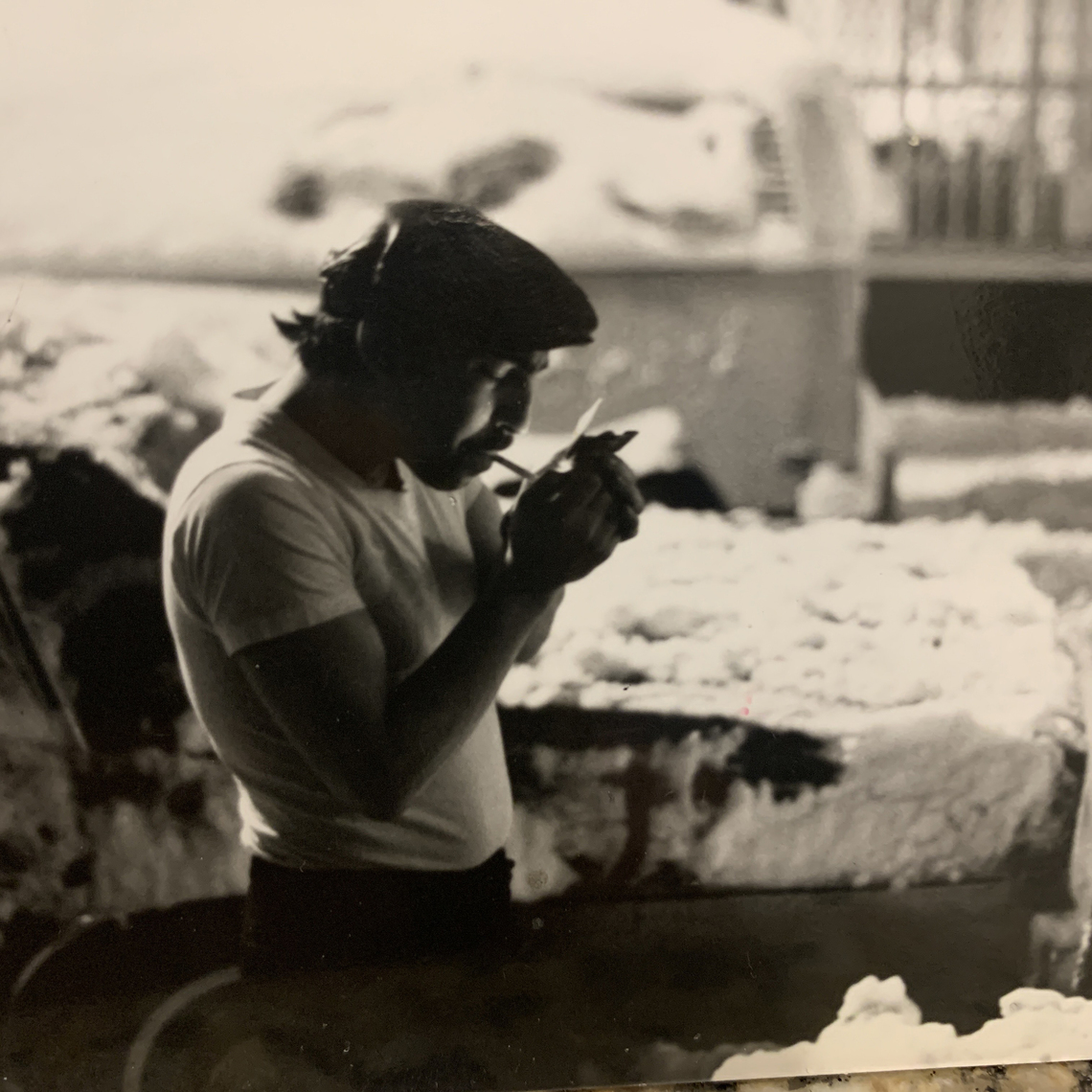 Marky Iannello having a smoke on a snow-covered Greenwich Village street. (Photo by John Pirozzi)

BY PENNY ARCADE | The untimely, unexpected and tragic death of Marky Iannello in Southfield, Jamaica, from complications of diverticulitis on Feb. 17 shook the Downtown rock and roll community to its core. Those tremors were felt far from these roots because Marky Iannello was one of those rare behind-the-scenes players whose net of friendship and activity was cast far, crossing many spheres from the 1970s to the present.

A lifelong Greenwich Village resident, Mark Patrick Iannello was born Sept. 28, 1953, to Helen Iannello and Stanley Iannello in a short-lived marriage when the Village was still largely an Italian enclave. Helen Iannello would go on to become a legendary Democratic activist representing Greenwich Village and the first Italian ethnic woman to become a real player in New York City politics.

In 1955 when Marky was 2 years old, Helen moved with Marky and her other son, Anthony, back to her old block to be near her mother, the super of two buildings on Thompson Street.

This is where Marky lived his entire life, on the same block to which his Italian grandfather had immigrated, till late December of 2020 when he made his annual trip to Jamaica, a journey from which he would not return. Helen, Stanley and Anthony Iannello all predeceased Marky.

Thompson Street between Bleecker and W. Third Streets is the quintessential Village Street. It is the one street in the Village that has changed the least and retains what the Village was 50 years ago, with its unmistakably foreign, Old World, essentially bohemian feel. The stores are interspersed among the old tenements with some newer buildings, but the newer buildings don’t shout out and stick out, as they do everywhere else in the city.

On that block of Thompson Street there are not one but two chess stores, places to sit and play or watch people play chess. It lends the block an air of languishing. I still get the same feeling looking into the warmly lit windows of the Chess Forum with its rickety chandelier abaze at all hours, now as I did in 1967.

Generation Records, with its bold, red block neon lettered sign, sweeps you back to 1970 the second you cross its threshold to an era before digital anything.

There’s a newspaper stand, now a relic, closed up, but freshly painted that forest green that once coated every newsstand in the city. This was Marky’s block.

By all accounts, Helen Iannello, “Feisty Helen,” was uncompromising. She was a crusader for human and community rights. A devout Catholic, she nonetheless was a fierce reformer, championing both gay rights and women’s rights, and was involved in Catholic Women For Choice.

Marky grew up under her watchful eye and this no doubt fostered his respect and love for strong independent women and his penchant and dedication for tolerance and community service.

Against this backdrop of progressive politics, bohemian diversity and individuality in Greenwich Village, Marky Iannello grew up through the cultural shifts from bohemians to Beatniks to hippies, never losing the love of his Italian ethnic heritage that he was born into, and coming of age, with a front row seat to the 1970s art explosion that in part manifested what came to be called the punk movement.

At the heart of this synthesis was the concrete presence of Jack Giasullo, sculptor, carpenter, salon keeper, whose carpentry shop/studio sat in the middle of the Marky’s block.

In the late 1960s Giasullo discovered his original birth certificate and reclaimed his Italian birth name, Crescenzo, and his studio and he became a Greenwich Village legend.

Crescenzo’s Thompson Street storefront was a gathering place for artists, among them the painter Paul Resika and the sculptor George Spaventa. Here the intergenerational exchange that is at the heart of any real art scene continued.

Marky Iannello found in Crescenzo a surrogate father who would influence Marky’s own sense of community involvement.

Crescenzo would take carloads of city boys out to the New Jersey countryside where he himself had grown up, providing them with Tom Sawyer-like adventures, an introduction to rural life on the family farm and camping in tents along the river.

Meanwhile, back on Thompson Street, Crescenzo fed all those who came by with large pots of escarole and bean soup, a southern Italian rural staple. Young artists of every stripe, from New York University and the School of Visual Arts students to other young broke seekers, found their way to his Thompson Street storefront and mixed in with artists from previous generations.

One of the longtime habitues of Crescenzo’s studio, the sculptor Jeffrey Mase, told me, “As his friends died and aged out, Crescenzo’s friends got younger.”

Later Crescenzo would turn his carpentry shop into a bonafide private club he called the Blue Angel.

Being born in Greenwich Village, a block from Bleecker Street, is a lot like being born into a carnival. So, it comes as no surprise that at 15 or 16 years of age Marky and his friends were already scoping out local rock and roll bands.

David Johansson of the New York Dolls remembered: “When we started the New York Dolls, Marky was a 15-or-16-year-old Village kid who would hang out with mainly with Syl Sylvain and I. We used to put fliers up on streetlamps to publicize our shows and Marky would eagerly help out.

“Once I asked him to pick up some fliers for us at a printer on 23rd Street and a look of abject terror came over his face as he told me he had never been above 14th Street and that he would do anything for us except that. I knew Marky for the rest of his life!”

The list of bands that Marky worked for is epic, the New York Dolls, Johnny Thunders, Blondie and Iggy Pop. But Marky refused every opportunity to be interviewed for the ubiquitous films and book and magazine articles on the punk scene and the bands for which he had worked. Marky had transferred the Sicilian concept of Omerta, the silence of the stand-up guy, to rock and roll.

Iggy Pop wrote to me: “I met Marky right around the end of the ’70s when the Village still had a streetlife. He had a confident composure at all times that can only come from a lifetime spent in the roots of the city. I never met anyone quite like him before or since. He was by no means an angel, but always had a nice smile and good vibe for anybody he liked at all. Marky was the witness/best man to my marriage at City Hall in 1984. He was also the photographer, haha. Marky knew how to have a good time. A lot of people are gonna miss him. I liked him quite a lot.”

Hours into weeks into months as the knowledge of Marky’s death spread, his friends were still trying to negotiate with the universe to get hm back.

Clem Burke, the drummer for Blondie, wrote: “Mark Iannello was a good friend of mine. Over the years we shared many adventures together. Most memorably was the 1981 tour we did together with Iggy Pop. Marky was an invaluable asset to me on that tour both as a friend and a technician. I was always glad to see him around town. He personified the NYC/Greenwich Village vibe of positivity. He always had a smile on his face. I spoke to him only a few days before he passed away and told him that I had been working on my memoir and had coincidentally just finished writing a passage about our time together on the Iggy tour.”

The feelings of loss and grief have been overwhelming and unexpected just as his death was unexpected. Sometimes when someone dies, an era dies with them and our understanding of that era increases. Marky Iannello represented the authenticity, individuality and integrity that was pure Downtown New York and is harder and harder to find.

We grieve the loss of New York’s authenticity through the loss of this singular entity Marky Iannello.

Debbie Harry of Blondie told me: “There are some people that maybe you’d prefer to avoid most of the time but Marky was not one of them. It’s truly sad to say goodbye to a person to whom you’d always have been happy to say hello.”

Marky Iannello was also a much-loved irrigation specialist. His business, Intown Irrigation, helped support some of the most beautiful rooftop gardens in New York. Marky was deeply committed to the New York garden movement and volunteered at many city gardens.

He was also committed to TASCA, The American Small Craft Association, a nonprofit club focused on introducing the sport of sailing to the general public that works in cooperation with the city’s Department of Parks and Recreation to provide inexpensive basic sailing lessons to anyone interested.

Marky loved to cook southern Italian specialties and was always showing up with cooked food!

Marky is survived by his cousins Lynn Marziale and David Allison, Linda and Drew Marziale, Joanne Marziale Ray and Sara (Ianello) DiBenedetti and a world of friends both near and far.

A funeral was held April 25 at St Joseph’s Catholic Church, on Sixth Avenue in the Village. A celebration of Marky’s life will be held Sat., Nov. 6, in Brooklyn. Friends and admirers of Marky can RSVP at CelebratingMarky@gmail.com.

Arcade is a performance artist, actress and playwright.