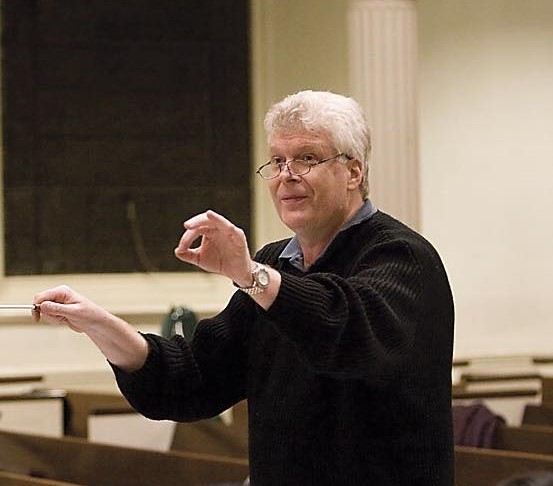 BY THE VILLAGE SUN | Mark Mangini, the music director of the Greenwich Village Chamber Singers for more than 40 years, died peacefully at his home in Astoria on Sept. 5 after a courageous battle with cancer.

Mangini was one of New York’s most active choral conductors. He was on the faculty of CUNY’s Kingsborough Community College and conducted choruses at CUNY’s Hunter College and Rutgers University. His repertoire spanned music from the pre-Bach eras with historical instruments through numerous commissions of contemporary works, in addition to the more standard choral repertoire.

He was also the director of music at Grace Church in Brooklyn Heights, the conductor of the Bach vespers series at Holy Trinity Lutheran Church on the Upper West Side, and the music director of the Choral Society of the Hamptons, for which he received critical acclaim.

He led several joint performances with the Greenwich Village Chamber Singers and the Choral Society of the Hamptons, most notably the 2007 Lincoln Center performance with the Brooklyn Philharmonic of Lukas Foss’s monumental secular cantata, “The Prairie.”

A singer himself, he taught voice privately throughout his career.

Mark Mangini was born on April 1, 1952, in Manhattan to the late Suzanne Scheffer Mangini and Jerome J. Mangini. The oldest of five children, Mangini was raised in Darien, Connecticut, and attended the Darien public schools. A grandson of the renowned East End architect Alfred A. Scheffer, Mangini spent childhood summers with his family in Amagansett, and maintained an affection for the East End of Long Island his entire life.

After considering careers in both journalism and theater, Mangini began the serious study of music while an undergraduate at Amherst College. His teachers included Iva Dee Hiatt, Fiora Contino and Helmut Rilling in conducting and Jon Humphrey, John Bullock and Mara Waldman in voice.

Mangini loved to travel, and maintained close and active friendships in Brazil, England, France and Thailand. For decades, he visited Brazil every summer. In recent years, England, Scotland, France, Israel, Alaska, the Canadian Maritimes, Utah and the Great Smoky Mountains were just some of the destinations he visited with his husband, Paulo, and their friends.

Mangini was also passionate about gardening, cooking, reading nonfiction and politics. He was an avid watcher of MSNBC and follower of liberal political opinion.

“It is impossible to sum up a life in an obituary,” Nelson said, “but Mark’s was a life well-lived, one that ended much too soon, and a life that enriched the lives of his husband, family, friends and hundreds, or maybe even thousands, of music students and choral singers. Mark’s musical skills, artistry, compassion and humanity were his gift. We will remember him with love always.”

“Mark led the GVCS for over 40 years and built it into the fine singing ensemble that it is today,” said Nancy Pasley, a member of the choir. “He was a warm and caring man as well as a wonderful musician. As a conductor he was exacting but always in a positive and encouraging way. It was a great pleasure and privilege to be part of the group for these last several years.”

A tribute concert will be performed by the Choral Society of the Hamptons on Sept. 26 at 4 p.m. at the Bridgehampton Presbyterian Church, 2429 Montauk Highway, Bridgehampton.

A memorial concert will be performed by the Greenwich Village Chamber Singers on Nov. 18 at 8 p.m. at the Church of Saint Luke in the Fields, 487 Hudson St.