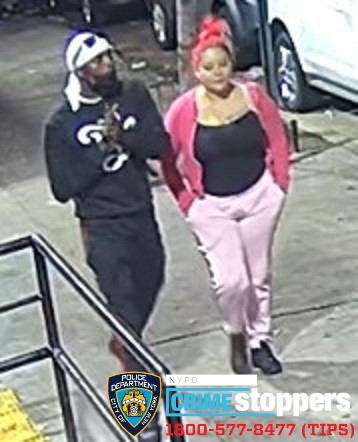 Police say the man at left is wanted in connection with a shooting outside the Riis Houses last month. His pink-haired companion is wanted for questioning. (Courtesy N.Y.P.D.)

A man was shot outside the Jacob Riis Houses last month, police said.

According to cops, on Tues., Sept. 15, about 10 minutes after midnight, a 19-year-old man was in front of 108 Avenue D, between Seventh and Eighth Sts., when an unidentified male approached him and blasted him once in the right leg.

The gunman was accompanied by a woman with pink hair. He and his colorful sidekick fled on foot to parts unknown.

The victim was taken to Bellevue Hospital in stable condition. There were no other injuries reported.

The alleged shooter is described as thin and was last seen wearing a black long-sleeve shirt with white lettering on its front, black sweatpants with red stripes on the sides, black sneakers, a white du-rag and sunglasses on top of his head and a black face mask.

The woman, who is wanted for questioning, had a medium build and pink hair in a ponytail and was last seen wearing a black tank top, dark pink sweater, light pink sweatpants with black stripes on the sides and black sneakers.

Police released surveillance video and photos of the two individuals obtained from the location prior to the incident.

Police ask that anyone with information call the New York Police Department’s Crime Stoppers Hotline at 1-800-577-TIPS (8477) or for Spanish, 1-888-57-PISTA (74782). Tips can also be submitted on the Crime Stoppers Web site at WWW.NYPDCRIMESTOPPERS.COM  or on Twitter at @NYPDTips.