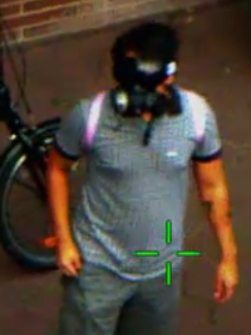 Police say this man shot a laser at a police chopper by the Battery. (Courtesy N.Y.P.D.)

Guess this guy never heard — it’s not nice to point.

Police are looking for a shameless Disney fan who they say beamed a laser pointer at a New York Police Department helicopter in Lower Manhattan early last Saturday evening.

On June 20, at 7:15 p.m., near 75 Battery Place, the man aimed the laser at the chopper as it flew over the location. Police said the suspect was captured on camera ducking behind the cover of a tree while zapping the device at the ’copter.

Shooting the beam at the airborne cops created “substantial risk to the occupants,” police said.

Police released photos and video of the suspect — apparently taken from the helicopter, judging by the green crosshairs on the images. The chopper was apparently flying at an altitude of around 240 to 270 feet, according to stats at the bottom of the video.

The man is being sought for reckless endangerment.

The suspect, who had dark hair, is apparently not a member of the notorious Black Bloc — he incongruously sported a pink backpack with Anna and Elsa of “Frozen” on it. He also wore gray shorts, a gray polo shirt and white sneakers, plus a respirator and goggles.

The man is seen striding toward a group of cyclists and shaking his head, but it was not immediately clear if he was part of the group.

The sound of police helicopters above Manhattan has been constant during June amid the ongoing George Floyd protests, as the choppers have been keeping an eye on the marches and other goings-on.