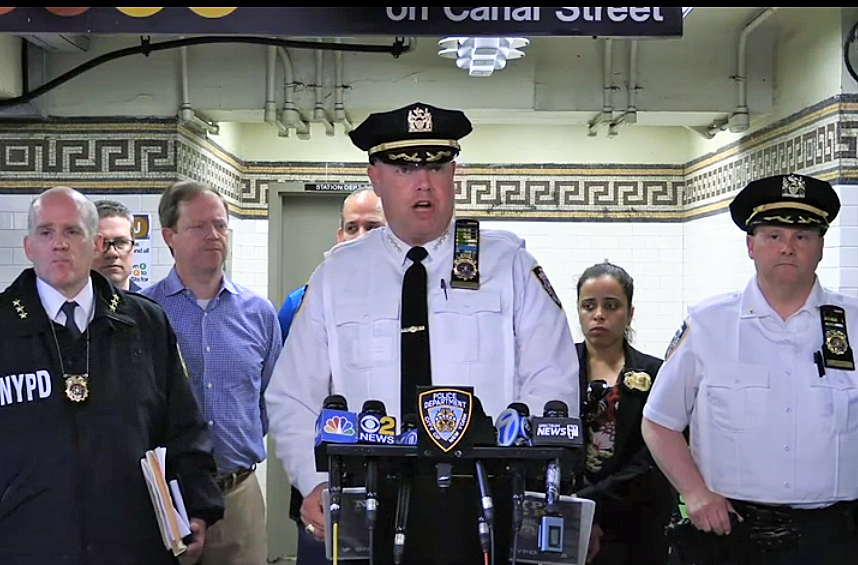 Speaking at the Canal Street Station, Chief Kenneth Corey, center, detaled what police know so far about the fatal shooting onboard the Q train Sunday morning. The killer fled the train at the station, which is the first stop after the bridge. (NYPD News/YouTube)

BY LINCOLN ANDERSON | Updated May 22, 9:45 p.m.: A Park Slope man was slain — seemingly randomly — while riding a train across the Manhattan Bridge Sunday morning and police are intensely hunting for the shooter.

Police held a press conference at the Canal Street station just a few hours after the killing, giving an update on the incident and what details they have about the killer, who fled from the train at the Chinatown station and is still at large.

Chief Kenneth Corey, the New York Police Department’s chief of department, said police received a call at 11:42 a.m. of a 48-year-old male with a gunshot wound to the torso at the Canal Street Station. The victim, who was found unconscious and unresponsive by police, was taken by Fire Department E.M.S. ambulance to Bellevue Hospital, where he died.

Police later identifed the victim as Daniel Enriquez, who lived on St. John’s Place, between Seventh and Eighth Avenues, near Grand Army Plaza at the northern end of Park Slope, in Brooklyn.

The New York Post reported that Enriquez worked as a research assistant at Goldman Sachs and was of Mexican descent. According to his LinkedIn page, he received a master’s degree from New York University in Latin American and Caribbean studies.

Corey gave a report on what police know so far based on a preliminary investigation. He said the victim was seated in the last car of a Manhattan-bound Q train. Witnesses said the suspect was “walking back and forth inside the train car and, without provocation, pulled out a gun and fired at the victim at close range as the train crossed the Manhattan Bridge.”

The shooter fled from the train at the first station after the bridge.

Although there were other riders in that train car, no other straphangers were injured, according to Corey.

The chief said the Metropolitan Transportation Authority has provided police with security video from the Canal Street Station and that police are still investigating witnesses. Police are asking any additional witnesses to come forward to help catch the shooter, including by providing photos or video they may have taken.

Asked by a reporter if it’s known if the two individuals had any prior history, Corey said, “What we’ve got from the witnesses, there is no prior contact between the victim and suspect.”

Corey said the suspect is described as a dark-skinned male, heavyset, with a beard and wearing a dark-colored, hooded sweatshirt, gray sweatpants and white sneakers.

For a video of the complete press conference, click here.

The chief urged anyone with information about the incident to call the N.Y.P.D.’s Crime Stoppers Hotline at 1-800-577-TIPS (8477) or for Spanish, 1-888-57-PISTA (74782). Tips can also be submitted on the Crime Stoppers Web site at WWW.NYPDCRIMESTOPPERS.COM or on Twitter at @NYPDTips. All tips are strictly confidential.