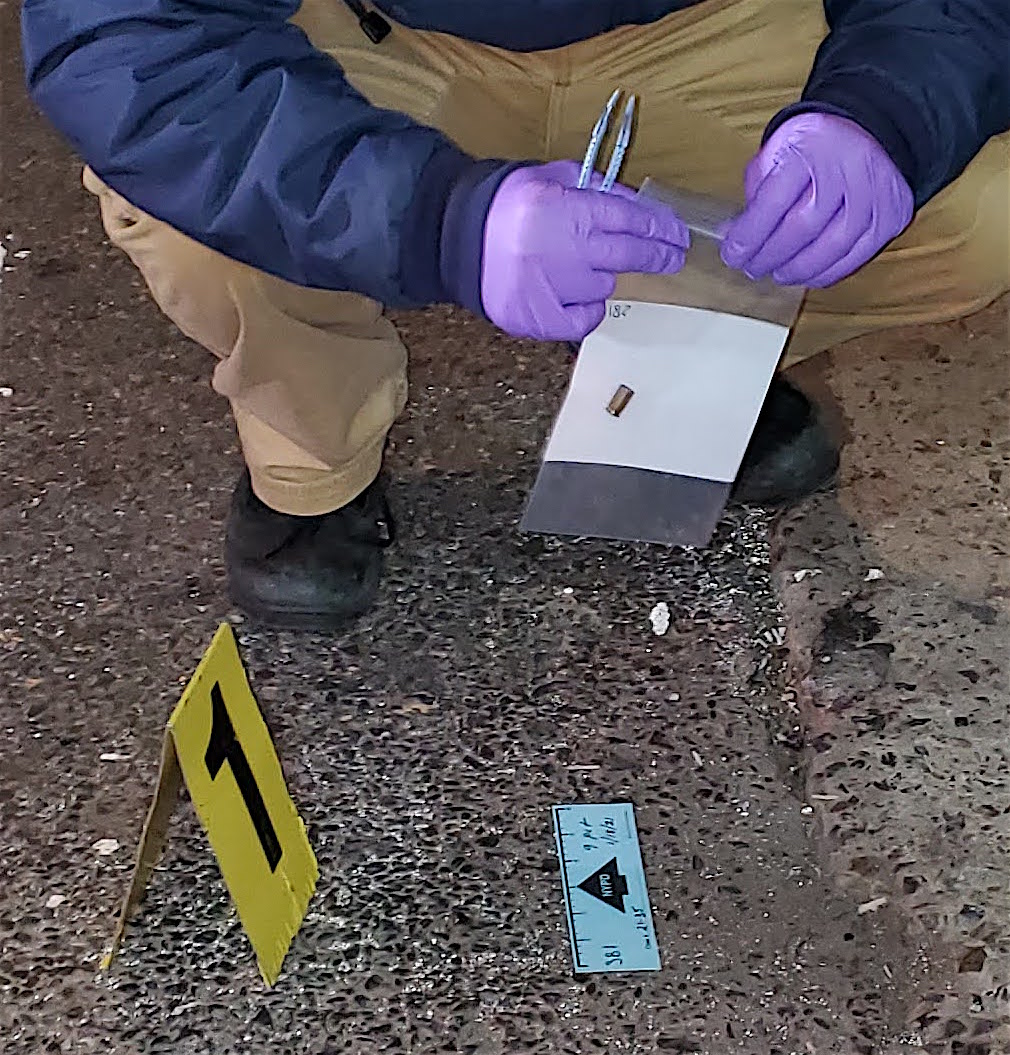 A Crime Scene Unit officer collects one of half a dozen bullet-shell casings left scattered after the fatal shooting. (Photo by The Village Sun)

Man gunned down in drug-drenched corner of East Village

BY LINCOLN ANDERSON | Updated Jan. 19, 2:14 p.m.: A man was fatally shot Monday evening on a drug-infested strip of Alphabet City that residents lament seems like it has slipped back into the dark crime days of the 1980s.

According to police, around 8:40 p.m. officers responded to multiple 911 calls of a man shot in front of the Fresno II Gourmet Deli, at the southwest corner of Avenue C and E. Third St.

Responding cops found a 36-year-old male with a gunshot wound to the chest. E.M.S. transported the victim to Beth Israel Hospital, where he was pronounced dead.

Police are withholding releasing the victim’s name until his family has been properly notified.

A Police Department press spokesperson said there was not much information to add to the report at this point.

“An unidentified group of males was seen fleeing by witnesses” after the shooting, he offered. However, he added that it wasn’t immediately clear whether the fleeing individuals were involved in the shooting or just running away from it in fear.

Sometime after 11 p.m. Monday night, Crime Scene Unit officers were documenting the location of the bullet-shell casings left scattered on the street after the shooting. There were a total of six casings, which they marked with yellow numbered signs before photographing them. They then collected the ballistic evidence in plastic baggies.

Avenue C was blocked off at Third and Second Sts. as police investigated the crime scene.

Across the street from the deli, on the intersection’s southeast corner, inside the crime-scene tape marking off the area, lay a white Lang Tu-brand folding bike. Police guarding the crime scene said they did not know if it belonged to the victim. However, the New York Post reported that one person who called police about the shooting said the victim had been on a bike.

Asked if he had heard the shooting outside, a worker inside the Fresno II Gourmet Deli said he had not started his shift at the time.

Meanwhile, two local residents who spoke to The Village Sun at the scene said this stretch of Avenue C has a serious drug-dealing problem that is not being addressed by police, and so they were not surprised by the violence. They both declined to give their names. To protect their safety, the newspaper will not identify the two individuals in any way other than to say they live in the area.

The corner building at 32 Avenue C, at the intersection’s southeast corner, which is being renovated and has been ringed by scaffolding for some time now, attracts a sketchy element around it, the first resident said.

The first resident said, “I heard, I would say, five, six shots. I thought it was [fire]crackers. I was in my kitchen area, watching TV. The building is a problem. It’s taking them forever [to fix it up]. … Bad actors on the street… . We also have a drug dealer across the street there [nodding toward a spot across Avenue C to the south of the deli]. It’s [like] the good old ’80s. He has kids running for him. He drinks alcohol on the street, hard liquor…out of a bottle. Obnoxious.”

The second resident figured the white bike belonged to the victim.

“It looks like they were going to meet because he was on the bike,” the second resident said. “They sell crack here. It’s coming from Fourth St., that building [Marina Bracetti Plaza, a Housing Authority development]. Sometimes they come here to sell the drugs. It’s this whole area, Fourth St. to Second St.”

Rudy Giuliani recently disgraced himself by inciting Trump diehards to violently storm the U.S. Capitol. But the second resident said, when Giuliani was New York City’s mayor, he cracked down on drugs and crime in the East Village — though now, under Mayor de Blasio, the streets have regressed to the bad old days.

“Remember in the ’8os?” the second resident said. “[Giuliani] cleaned everything up. There used to be cops on every corner in the East Village. That was when Giuliani was mayor. But no more. … Don’t point. Don’t be moving your…[hand]. Don’t talk to me. … They’re watching. …

“It’s a lot of heroin and a lot of crack. And the crack is bringing a lot of homeless. You just have to come here the first of the month [and see for yourself] when everyone gets their [welfare] money.

“[The dealers are] young kids. They like 18, 19, 20. Yes, yes, it was cleaner [under Giuliani]. I say it’s the mayor’s fault. I knew something was going to happen sooner or later. … The police walk by and don’t do anything.

“These people don’t respect me, they smoke their crack pipe right in front of you.”

Correction: The original version of this article said the shooting was at 10:40 p.m. but it occurred at 8:40 p.m.