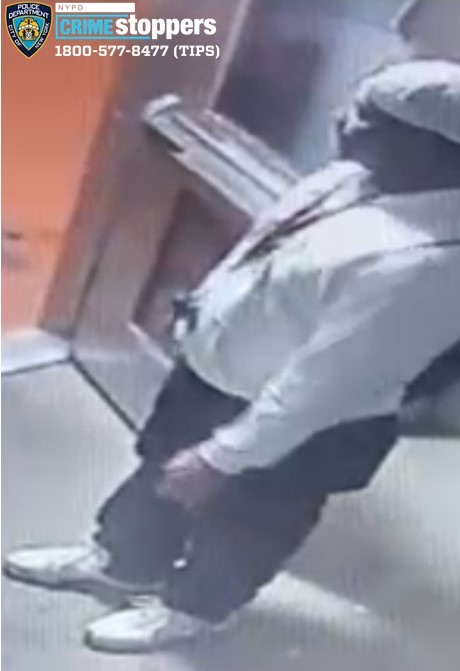 A surveillance camera photo of the alleged suspect. (Courtesy N.Y.P.D.)

Man fires gun in Jacob Riis Houses, then ‘flees’ on all fours

Police are seeking the public’s help in tracking down a man who they say fired off a gun in the East Village.

The shooter is sought for reckless endangerment.

Police released surveillance photos and video of the alleged suspect. He wore a white hooded sweatshirt with a dark lanyard around his neck, dark pants, white sneakers, a backwards white baseball cap and a string backpack.

The video shows him ducking behind a tree and pile of garbage and cardboard boxes, then crawling on his hands and knees through the mound of trash, before crawling away down the sidewalk while anxiously casting glances about him.

Asked what was going on in the video, a police spokesperson speculated the suspect might have been trying to hide from responding officers. He said a handgun was recovered at the scene. The investigation is ongoing.

Anyone with information is asked to call the N.Y.P.D.’s Crime Stoppers Hotline at 1-800-577-TIPS (8477) or for Spanish, 1-888-57-PISTA (74782). Tips can also be submitted on the Crime Stoppers Web site at crimestoppers.nypdonline.org or on Twitter at @NYPDTips. All tips are strictly confidential.