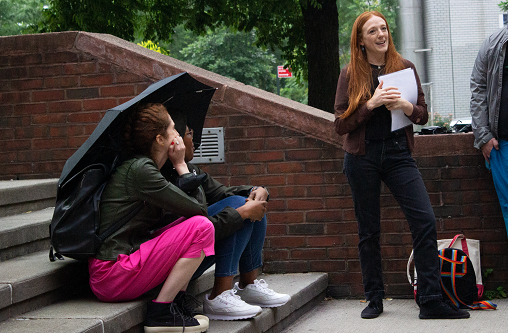 BY JASMINE SHIFFER | It was a drizzly afternoon on the Lower East Side as attendees arrived on the steps of the Abrons Arts Center, the first stop on Henry Street Settlement’s queer history tour of the neighborhood.

Katie Vogel, one of the tour’s co-creators as well as Henry Street Settlement’s public historian, smiled out at the committed crowd.

“There’s always been a lot of queer community here at the arts center,” she said, though adding that, predating the arts center, the settlement house had a historically queer legacy. Henry Street Settlement was founded by nurse and humanitarian Lillian Wald in 1893 to provide public health support to the immigrant community on the Lower East Side.

“She had a huge impact on New York City,” Vogel said of Wald. “And we know she had romantic relationships with women through the love letters that are left behind.”

A video interview of Katie Vogel and Daniel Walber, two of the tour’s co-creators, along with scenes from the tour. (Video by Jasmine Shiffer)

Vogel and her five co-creators, Jimmy Fay, Natalie Hill, erin reid, Daniel Walber and Salonee Bhaman, who also attended as guides, started the tour a year ago with Lillian Wald’s queer story as an inspiration.

“Henry Street as an organization is really bringing that to the forefront of our history and not saying it’s just a detail of her life, it actually is really foundational,” Vogel said.

Turning up Ludlow Street, Walber stopped the group in front of the Seward Park Educational Campus, which was built in 1929 to replace the old Ludlow Street Jail and Essex Market Police Court. He told the story of Charley, a gender-nonconforming person who was detained there for cross-dressing, labeled as vagrancy, in 1856.

Walber explained vagrancy laws as intentionally vague, “such that the police can pick up whoever they want to pick up for whatever reason.”

Charley may have been held specifically in violation of a masquerade law against public costuming. This law, passed in 1845, was repealed just two years ago to allow for public mask-wearing in response to the pandemic.

“It’s easy to forget that queer communities even existed so long ago,” said Violet, an attendee visiting from Upstate New York. “It feels like such a newly accepted thing. It’s wild to hear stories like this from the 1800s.”

Tour guide Bhaman called these stories a “prehistory to the gay civil rights movement.” She explained that, at the time, “people were not identifying as trans but there were all these kinds of gender outlaws” —  a term attributed to legal historian Kate Redburn — “who were often cross-dressing or ensnared in the law.”

Later on in the tour, Bhaman stopped the group at the old site of STAR House, a group home run by trans activists Marsha P. Johnson and Sylvia Rivera in 1970. Throughout its year of existence, Johnson and Rivera took in queer youth off the streets and provided them shelter and food.

“I think a lot of these places served a very specific purpose when people couldn’t create community online or create community out in the open,” said Estefanía, another attendee on the tour. “These spaces became the only places you could go that were safe.”

“It is a lot more than a bookstore,” she said. It’s also a cafe and hangout space, and provides free mutual aid and Narcan training programs.

“It’s one of my favorite places,” Bhaman chimed in.

The tour is different every time, with about a dozen different locations in rotation. The tours run once a month. The one on Sat., July 9, is sold out. Future dates will be released on Henry Street Settlement’s social media and mailing list. Every tour has free tickets available.

“The six of us who created the tour just really deeply loved the neighborhood and community and its history,” Vogel said.

“The history of this neighborhood is, I think, a lot richer than a lot of people think,” Walber agreed.

Henry Street Settlement, as an institution of the Lower East Side’s queer history, has just received its designation as an L.G.B.T. historic site, and continues its work across 18 locations providing education programs, shelters, senior centers and employment programs to the city.