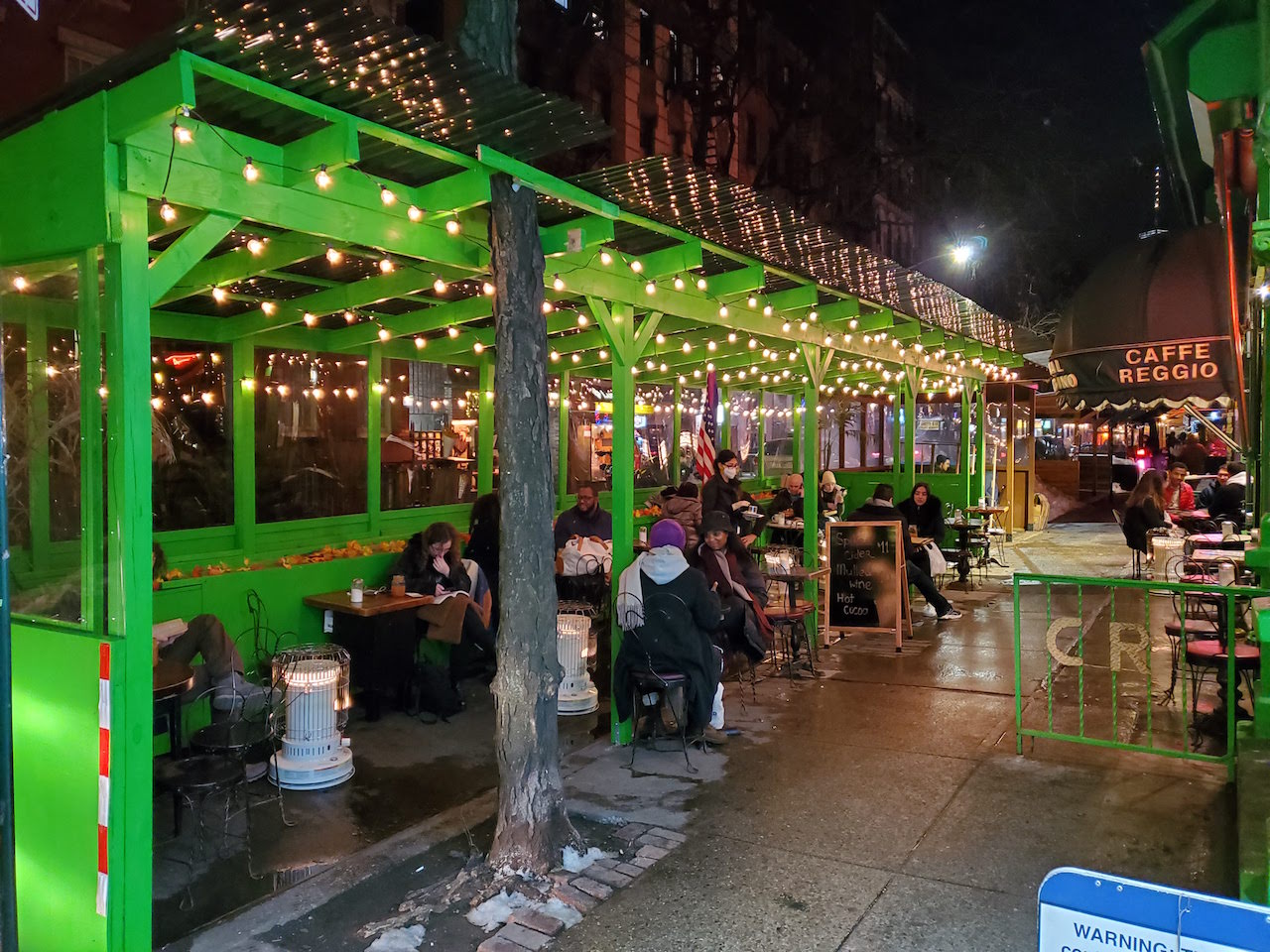 An outdoor dining structure on MacDougal St. outside Caffe Reggio. (Photo by The Village Sun)

BY LINCOLN ANDERSON | The way Mayor de Blasio and the City Council unilaterally decreed the Open Restaurants program permanent has left a sour taste in the mouths of some Downtowners.

A coalition of block associations plans to sue the city over the outdoor dining program, charging that the way the emergency initiative was made permanent is illegal — and that the street-seating scheme would, in fact, only continue to be illegal moving forward.

Village attorney Arthur Schwartz of Advocates for Justice, who is representing the plaintiffs pro bono, told The Village Sun he will be filing suit on Mon., March 15.

Schwartz is also a candidate for City Council in District 3 running in the June 22 Democratic primary.

The suit will ask the court to declare the law making Open Restaurants permanent “unconstitutional.”

The suit’s core plaintiffs group is the ad hoc New Yorkers for Safe Open Streets a.k.a. S.O.S. Key members involved in organizing meetings have included South Village Neighbors, E. Fifth St. Block Association, Central Village Block Association and the Cornelia Block Association, among others. Also involved are other block and resident associations stretching from the Bowery up to London Terrace in Chelsea.

A formal letter by Schwartz describing the suit says that the law (Intro 2127-A) making Open Restaurants permanent, which was passed on Nov. 15 of last year, “frankly seemed more like a political stunt than an actual statute.”

More to the point, the letter says, the measure illegally gives a city agency, the Department of Transportation, the power to legislate.

Per the letter, the law states, “By September 30, 2021, the department of transportation and any other agency designated by the Mayor shall establish a permanent open restaurants program to succeed the temporary program established … for the year 2020, provided that any additional legislation necessary to authorize such program has been enacted.”

In other words, D.O.T. instead of the City Council is the entity actually crafting the law. Or, as the plaintiffs’ letter puts it, “This is not a situation where the City Council passes a law with certain parameters and then assigns an agency to promulgate regulations.”

In addition, the group’s letter continues, the law making the Open Restaurants program permanent “totally ignored the Uniform Land Use Review Procedure (ULURP), a process in which changes in use of property in the City, where the changes go beyond existing zoning, [are reviewed]. And it invites continued violation of that law.”

Under ULURP, proposed land-use changes are examined, in succession, by community boards, the borough president, the City Planning Commission and the City Council. ULURP, the letter notes, is conducted “in an open process with lots of public participation, and ultimately is decided on a Council-district-by-Council-district basis.”

The letter states that, in order for the “temporary emergency program” for outdoor dining to be lawful, the City Council would need to amend a number of things, including the city’s Zoning Text; the Landmarks Law; the city’s Human Rights Law and its provisions for public access, also keeping in mind the Americans With Disabilities Act; laws requiring access for Access-a-Ride vehicles, ambulances and fire vehicles; the city’s Fire Code, as it applies to use of propane heaters, propane tank storage and accessibility of fire hydrants; the Noise Code; the Building Code since, the letter charges, “many of the street structures are not built to existing code”; and liability laws, clearly stating who is liable for accidents that occur beyond the curb [meaning in the street].

In short, the group’s letter states, “To have the Department of Transportation create a program which amends these laws is an abrogation of the City Council’s legislative authority and the carefully crafted system through which communities have a say in land use — and, to be sure, this program is less designed to help destroyed restaurants survive and more designed to increase the rental prices of restaurant spaces.”

Speaking to The Village Sun, Schwartz said what is currently being seen with the Open Restaurants diktat is part of a wider problem of community disenfranchisement perpetrated by City Hall.

“To me,” he said, “it’s part of an approach taken by the city that is also reflected in the recent proposal by [Council Speaker] Corey Johnson to create a ‘zoning czar’ that would shorten the ULURP process, where decision making on land use is getting more and more centralized and less involving the affected communities. This is imposing the will of the mayor on communities without their having a say.”

For its part, City Hall has hailed Open Restaurants as a lifeline for restaurateurs during the crushing pandemic. And operators have said it’s at least something amid ongoing restrictions on indoor capacity. Though some instead are choosing to hibernate through the winter months.

Ultimately, the Village activist attorney said, the Open Restaurants program post-COVID would not really benefit restaurants so much as it would landlords; basically, property owners would be able to charge higher rents due to the permanent availability of the parking lane for use for additional seating.

“It’s going to be [an extra] drop in the bucket for the restaurants that are doing the outdoor dining,” Schwartz shrugged. “The real solution for restaurants is to have commercial rent control and to have the Small Business Jobs Survival Act. You have rent control when there’s an emergency; this is an emergency now.

“All this does is give landlords additional space to lease that they don’t even own,” he added of outdoor dining. “And yet the landlord isn’t paying real estate taxes on it.”

The lawsuit by New Yorkers for Safe Open Streets will be filed by March 15 due to concern over a possible statute of limitations. However, additional plaintiffs can still sign on until March 30. Individuals or organizations wishing to participate can reach out to Schwartz at aschwartz@afjlaw.com.