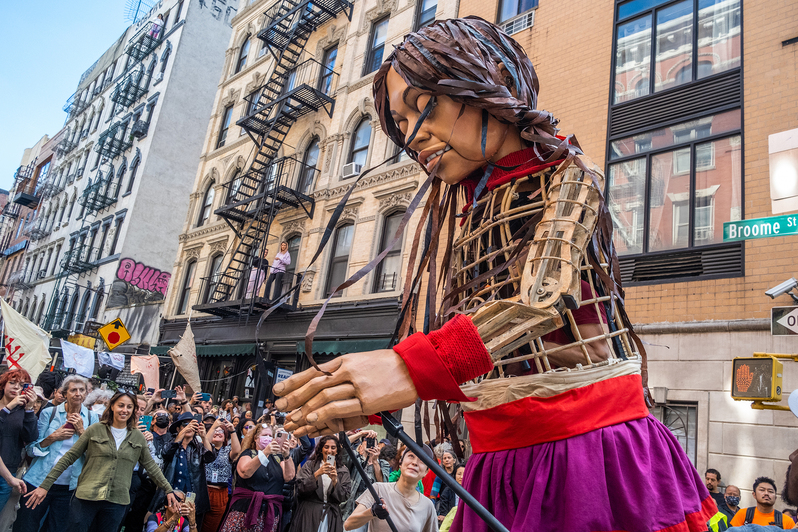 Little Amal is drawing crowds wherever she goes on her walking tour. (Photo by Milo Hess)

Little Amal walks ‘The Walk’ in LES and Chinatown

Calling attention to the struggles of immigrants, Little Amal, a 12-foot wooden puppet, strode through the Lower East Side and Chinatown last week.

She started out at the Tenement Museum, on Orchard Street, making her way through the neighborhood to Klezmer music. As Little Amal entered Chinatown, the music segued to Chinese drumming.

With an escort of white banners strung along lines betweeen poles, the puppet-led procession — followed by a few hundred people running behind it — continued on to the base of the Manhattan Bridge.

Join us at 5:00pm at @stannswarehouse for one final chance to meet Amal. Amal’s 2:30pm appearance at Atlantic Avenue is cancelled due to weather. pic.twitter.com/TVPTdytoVt

Started as an artists’ project, “The Walk” by Little Amal began in Europe last year and is now on an American tour. The narrative is that Amal — whose name means “hope” in Arabic — is a 10-year-old Syrian refugee who is searching for her uncle.