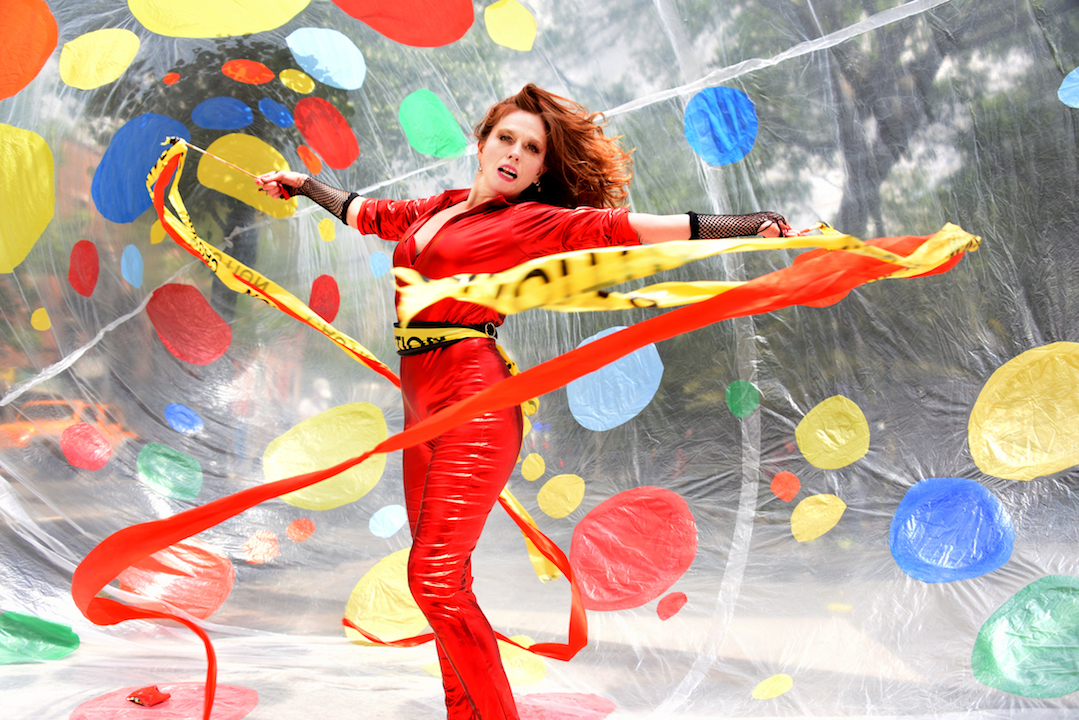 Life in a bubble: Heather Litteer’s ‘Kiss’ pushes the envelope

BY THE VILLAGE SUN | We’ve all been living in a bubble during the coronavirus pandemic, isolated from each other, keeping our distance.

Earlier this month, as New York City was finally inching toward reopening, East Village performance artist Heather Litteer evoked the feeling of being in a bubble, literally.

She performed her pop-up piece “Cautionary Kiss” on June 1 at the corner of Avenue A and Seventh St.

The bubble that she was inside of was actually a jumbo-size inflatable balloon from a Jackie Factory: Low Life edition performance and the Howl! Arts Festival.

In her artist’s statement for the performance, Litteer said, “I am repurposing this inflatable balloon with different intentions, breathing air into this balloon as a celebration of life, as we take one cautious step at a time to move forward into a new world.

“The balloon represents the barrier of the human connection and the energy of our spirits and souls, with the sudden lack of human contact that has completely upended the world which we knew in a matter of days, spinning the world’s axis on her head.

“Cautionary Kiss,” she said, is “a Valentine to our loss of human contact as we once knew it. The loss of the touch of the skin; of the face-to-face and the embraceable you and, most of all, the Kiss — one of the highest forms of love and connection one can share.”

The performance’s backdrop was Tompkins Square Park and also Niagara bar, the exterior of which, she noted, sports one of her favorite murals in the city — of Joe Strummer of The Clash.

The painting features the phrase “The Future Is Unwritten,” which, Litteer noted, “I think we can all relate to at the moment, in the current state of the universe.”

Both the park and the corner bar have always been neighborhood cornerstones for music, artistic gatherings and demonstrations, she said.

“‘Cautionary Kiss’ is for all of us,” she said, “honoring those we have lost. May we all heal the wounds today and for years to come. Thanking all of those essential workers whose tireless commitment helps and keeps us healthy, safe, thriving, fed and protected.”

Her statement included thanks for a lengthy list of essential workers, including nurses, doctors, E.M.T.s, pharmacists, building superintendents, police, firefighters, supermarket and delivery workers, postal workers, child and elder caregivers, teachers, moms and dads who are homeschooling and Governor Cuomo…plus, last but not least, her own doctor, Demetre Daskalakis.

In an e-mail to The Village Sun, Litteer added, “There are no theaters open, so I brought it to the streets. I wanted to bring cheer to the neighborhood and infuse some positive artistic wonderment and energy into the streets. With Mother Earth showing us she is in charge — and she is the supreme goddess — she told us all to ‘Go to our rooms!’ to think about life and reflect and repose.”

She wanted to give a shout-out to the balloon’s creator, Jeffery Owen Ralston.

Following “Cautionary Kiss,” Litteer has been active in joining at least a half-dozen Black Lives Matter protests that were sparked by the police killing of George Floyd in Minneapolis on May 25.

Last Sunday, she joined in on a march with Jon Batiste of Stephen Colbert’s “Late Show” band. It was a peaceful “N’Awlins-style” procession, she said, through the street from Union Square to Washington Square and back again. She played a tambourine.

“I just joined in and tried to catch up with the horn section,” she said, “and today I’m trying to get to Brooklyn for the Black Trans Lives Matter. I am here to stand shoulder to shoulder and listen and learn.

“I am so glad that the Black Lives Matter movement is so strong, and with Gay Pride month upon us as well, it is such a time for change,” she said. “Let’s change the narrative not just here in New York City but globally.”