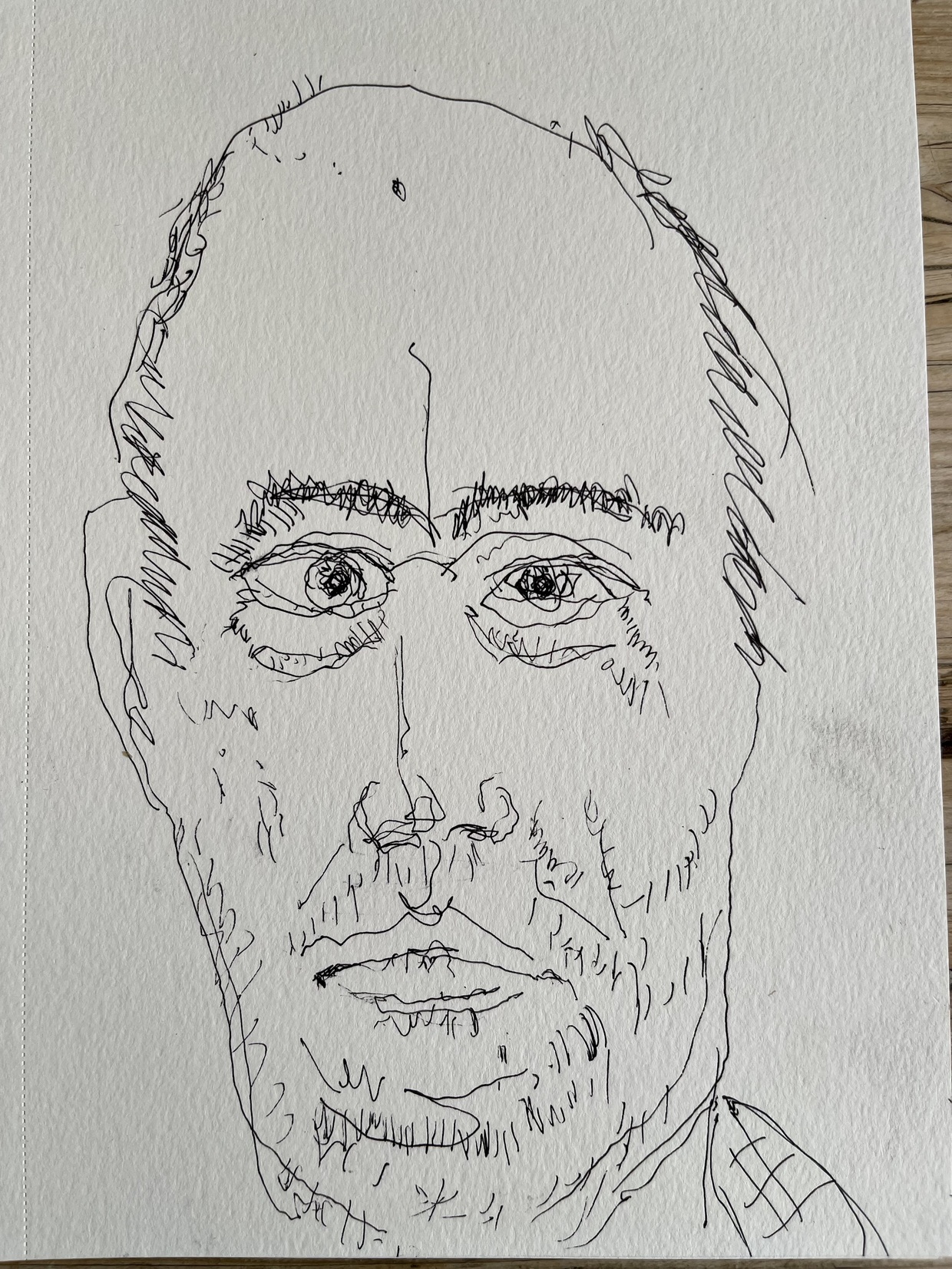 A self-portrait by Brian Gormley.

Letter from Dublin: Catching up with Brian Gormley

BY STEPHEN DiLAURO | ‘If I didn’t consume what I do, these paintings wouldn’t exist,” says artist Brian Gormley.

I’m in Ireland again and visiting with one of the more influential artists to come out the 1980s East Village art scene alive. His abstract canvases capture the energy of the streets and transform it into art that ascends to the level of true beauty.

“Although I have stopped drinking hard liquor entirely,” he says. “That’s made a big difference in my personal approach with other people.”

Gormley says he felt trapped in the United States during the pandemic. He had been taking care of his mother, who passed away in early 2020. He got his Irish citizenship last year and moved to Dublin as soon as Ireland opened up.

Gormley’s father was the late Edward Gormley, a prominent saloonkeeper in Manhattan who at one time owned eight thriving bar-restaurants in the East 30s, including The Guardsman, Guardsman II and The Sentry Box. In addition to his efforts as a restaurateur, Gormley’s father was a colonel in the National Guard’s 7th Regiment, headquartered in the Park Avenue Armory. Ed Gormley was a good friend of mine long before he introduced me to his son the artist.

In Ireland, Ed Gormley was known as a playwright and bon vivant. Several of his plays about Irish history were produced here. His radio plays were broadcast on RTÉ, the Irish national radio and TV network.

“I’ve been coming here since I was a kid,” says Brian Gormley.

In the East Village, Brian Gormley was known as a wild man who imbibed and indulged pretty much every intoxicant that exists.

“I also could be a bully,” he admits.

Gormley was good friends with Jean-Michel Basquiat. As a result, he has become something of an expert on the topic. He has an archive dedicated to preserving knowledge about the late artist’s use of materials and techniques.

“There should be a book,” Gormley tells me. “You should write it.”

It was Basquiat who encouraged Gormley to go all out with abstraction. His early works, some of which can be found at Van Der Plas Gallery on Orchard Street, included figurative elements.

“Jean-Michel saw doodles I was doing in a sketchbook and said that was more interesting that my paintings,” he recalls. “He said I should make paintings out of them. I took his advice and never looked back.”

At the end of Julian Schnabel’s biopic “Basquiat,” the title character says he is going to Ireland to have a drink in every bar. (I believe that is a worthy goal but it could take a lifetime to complete.) Gormley was in Dublin awaiting the arrival of Basquiat when word of the superstar artist’s overdose and death came.

“Jean-Michel was going to stay here when he arrived,” he says. “I was shocked and gutted by that news. I was also a lot younger.”

I’m somewhat acquainted with the art scene here. No other contemporary abstract paintings that I have seen in Ireland begin to ascend to the level of intensity, beauty and complexity that drives Gormley’s work.

In the 1980s East Village, Gormley was notorious for his dissolute behavior. His reputation is probably the reason the corporatized and quasi-puritanical hierarchy of the New York art world never embraced him and his work, while promoting his imitators. (I’ve been around long enough to be cognizant of timelines and evolution of individual artistic styles.)

For me, abstract painting faces much steeper criteria to achieve excellence. It must vibrate with powerful energies that are sui generis. Beauty, light and strength are generated within the compositions and exposed to the viewer without any preexisting reference point. Anyone can tell a good representational painting from one which is poorly executed. Likewise, I believe, most people know a figurative masterpiece is something special when they see one.

However, in abstract painting beauty has its own resonance. Light emanates from within the colors without a visible source. Martyred lines have no recognizable reference point outside the abstract compositions. Abstract paintings must stand solely on their own merits. Pure abstraction in painting must be captivating without any references to places or objects that are defined at a glance. This is the bare minimum for an abstract painting to exist as art.

For a master abstract painter, these energetic basic elements are brought together with passion again and again to establish a unique and identifiable style. That is where Gormley’s genius exists.

These days Gormley lives with gracious bonhomie in what used to be called Baggotonia, the bohemian quarter where the literati and artists of Dublin mingled. A pair of busts of Brendan Behan and Patrick Kavanagh in Searson’s, a gastropub right up the street from Gormley’s home, commemorates the literary feud those two carried on for years.

Walking through Dublin’s city center, Gormley stops and pulls out his cell phone to take a photo of some graffiti.

“I’m still fascinated by graffiti these many years later, even though it’s already in me, part of my essence,” he says.

Artists and their interest in graffiti is something that has existed through the centuries. We know, for example, the sculptor Michelangelo also left his mark on buildings in his native Florence.

Gormley likes to entertain at home. He is an excellent amateur chef.

“My father owned eight restaurants and had a huge collection of cookbooks and couldn’t boil an egg,” he says. “In that regard I take after my mother.”

Gormley grew up in the Manhattan bar scene.

Of course, Dublin is not a place where one comes to dry out.

“I still enjoy my pint of Guinness,” the artist says. “Drinking is part of the culture here.”

None of which affects his output now. His home is chockablock with paintings of all sizes. His printmaking efforts led to a show at the Irish Museum of Modern Art. When I was visiting, he was invited to County Kerry to create a line of ceramic dishware.

“Of course, I’d enjoy a prominent gallery taking me on in New York,” he says. “There’s nothing I can do about my past. People’s judgments about how I’ve lived my life are not going to affect my artistic output. My life is a no-regrets tour. I’ll let the work speak for itself.”

For more information about Brian Gormley, visit his Web page.

DiLauro is a playwright and critic. His weekly Bohemian Times Gazette newsletter can be found at bohemiantimes.substack.com.