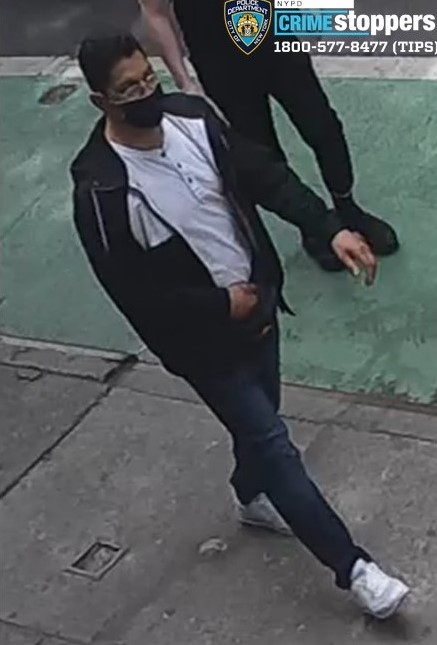 The alleged mugger, according to police. (Courtesy N.Y.P.D.)

A gun-wielding robber made a 32-year-old victim withdraw money for him from a Lower East Side ATM, police said.

Cops said that on Sun., May 16, around 2:30 p.m., the victim was approached by a stranger at Clinton and Delancey Sts. The man showed a firearm and, while threatening him, demanded the victim fork over cash.

The mugger followed the victim to an ATM a short distance away and reportedly forced him to withdraw and hand him $200. The victim was not injured and the individual fled the location.

Police provided surveillance video and photos of the suspect taken from the vicinity of the incident. The alleged suspect wore a hooded sweatshirt with a large black Nike swoosh logo on the back.

Police ask that anyone with information call the N.Y.P.D.’s Crime Stoppers Hotline at 1-800-577-TIPS (8477) or for Spanish, 1-888-57-PISTA (74782). Tips can also be submitted on the Crime Stoppers Web site at WWW.NYPDCRIMESTOPPERS.COM or on Twitter at @NYPDTips. All tips are confidential.