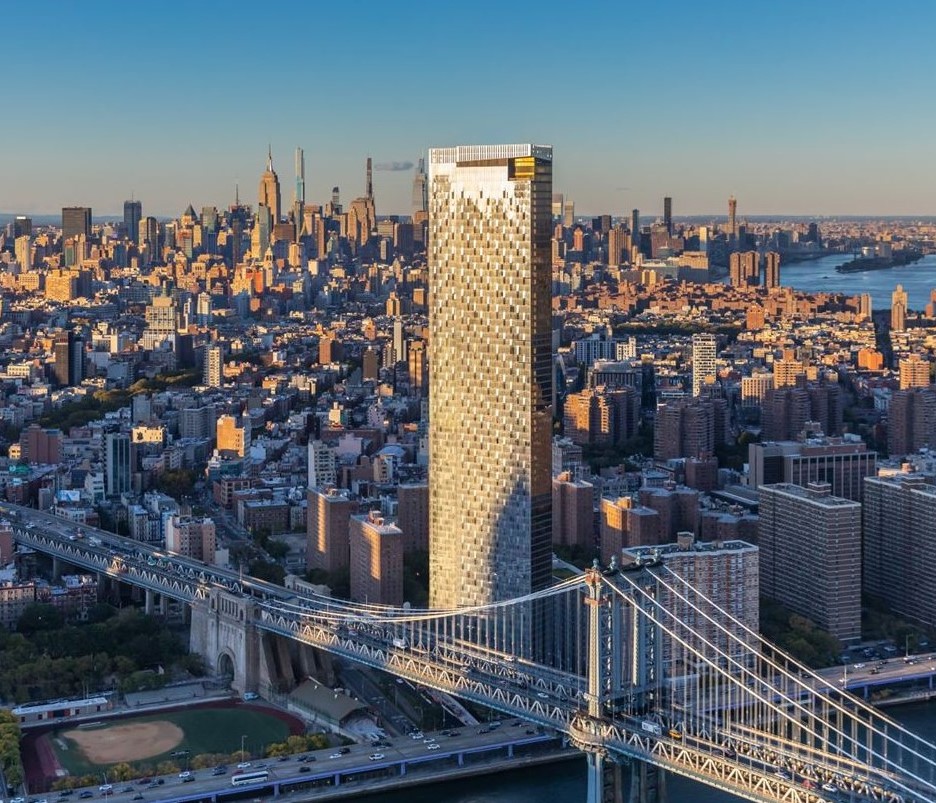 The 72-story, 800-foot-tall One Manhattan Square condo tower brought 815 new high-end apartments to the Lower East Side's Two Bridges area when it was completed in 2019 just north of the Manhattan Bridge.

BY GRACE SYMES | The Association for Neighborhood & Housing Development’s 2022 Affordable Housing Risk Report, released last week, found that in Downtown Manhattan median rent has gone up and the number of new non-affordable units is the highest in the city, while many low-income housing tax credits (L.I.H.T.C.) units are set to expire in the next few years.

The ANHD report looks at a number of threats to affordable housing, and collects statistics for each community district in New York City. It found significantly higher affordable housing risks in the Lower East Side/Chinatown district than in the rest of Downtown.

“What I see as being kind of the starkest trends for Lower Manhattan is the difference between Manhattan Community Board 3, which is Lower East Side/Chinatown, and the other districts,” said Lucy Block, a senior research and data associate for ANHD. “A lot of housing risks just show up more starkly.”

The Lower East Side/Chinatown area had a much higher rate of immediately hazardous housing-code violations than surrounding districts and ranked in the top 20 districts for unplanned New York City Housing Authority service outages. The area also had a median income that was less than half the amount of all other nearby districts, making an influx of new non-affordable units more likely to displace long-term residents, according to Block.

The Lower East Side and Chinatown have a much higher percentage of people of color and limited-proficiency English speakers than Downtown Manhattan’s other districts. It also has the second-most public housing units of any New York City district, according to the New York University Furman Center.

“So as you see Chinatown and the Lower East Side being an outlier in terms of a higher POC population and lower income, you also see these corresponding higher risk factors,” Block said.

In the rest of Downtown Manhattan, median district income is higher, making rent increases more bearable for many residents. From 2015 to 2020, most districts saw a median rent increase of around 4 to 6 percent — relatively low compared to the rest of the city. But in the East Side’s Community Board 6, stretching from Stuyvesant Town to Turtle Bay, median rent increased by 12.3 percent, which Block said might be related to the equity group Blackstone buying Stuyvesant Town and Peter Cooper Village in 2015.

In Chelsea and Clinton (Hell’s Kitchen), median rent actually decreased slightly, but the district had the highest number of new non-affordable units in the entire city in 2021, at almost 11,900. Non-affordable units are classified as units priced at more than 80 percent of the citywide median income.

“Market rents, especially in Lower Manhattan, are not going to be affordable to the vast majority of New Yorkers based on what most New York renter incomes are,” Block explained.

The Chelsea/Clinton district also had a high number of unplanned NYCHA service outages, and has the most L.I.H.T.C. units in the city.

Across Downtown Manhattan more than a thousand L.I.H.T.C. units are set to expire from 2023 to 2027. The L.I.H.T.C. program encourages the construction of low-cost apartments. But when an L.I.H.T.C. regulatory agreement period ends, the unit may end up being sold at market rate, pricing out residents.

The Lower East Side/Chinatown had the highest overall threat to affordable housing score in Downtown Manhattan, followed by Chelsea/Clinton and the Financial District, which had a high rate of foreclosure filings. In every district except Greenwich Village/Soho, there were more than 2,600 new non-affordable units added in 2021.

Block expects to see rents continue to climb in Downtown Manhattan as the city rebounds from the pandemic.