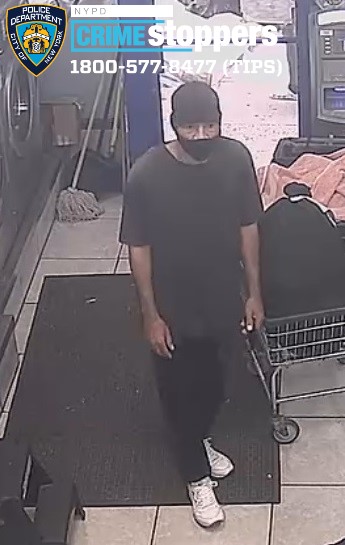 A surveillance photo of the laundromat bandit. (Courtesy N.Y.P.D.)

BY THE VILLAGE SUN | Police are now linking a sudsy suspect who knocked off a First Ave. laundromat to two other robberies of local laundry places.

As The Village Sun previously reported, according to cops, the suspect hit New Phoenix Laundromat & Cleaners at 199 First Ave., between 12th and 13th Sts., on Mon., July 16, around 9:15 a.m. The 32-year-old female employee tried to scare off the robber with a screwdriver, but he wrested it away from her and took $250 from the cash register.

Police say that, in an earlier incident, on Wed., Aug. 11, around 7:25 a.m., the coin-wash crook entered Best Cleaners Laundromat, at 99 Avenue A, between Sixth and Seventh Sts., and demanded money from the register. The clerk complied and the the man fled on foot with about $100.

In a third incident, police said that on Wed., Aug. 18, around 8:35 a.m., the same thief entered Bubble Laundromat, at 202 Rivington St., between Pitt and Ridge Sts., and demanded cash while flashing what looked like a knife. The clerk forked over the money and the man fled on foot westbound on Rivington St. with around $400.

Police released surveillance photos of the individual taken from all three locations.

The suspect is described as light-skinned and in his 40s. He wears a black stocking hat and a black face mask. Although he sports an outfit of sweatpants, T-shirt and sneakers, they are not always the same ones and are in different colors from one heist to the next.

Police ask that anyone with information call the N.Y.P.D.’s Crime Stoppers Hotline at 1-800-577-TIPS (8477) or for Spanish, 1-888-57-PISTA (74782). Tips can also be submitted on the Crime Stoppers Web site at crimestoppers.nypdonline.org or on Twitter @NYPDTips. All tips are strictly confidential.