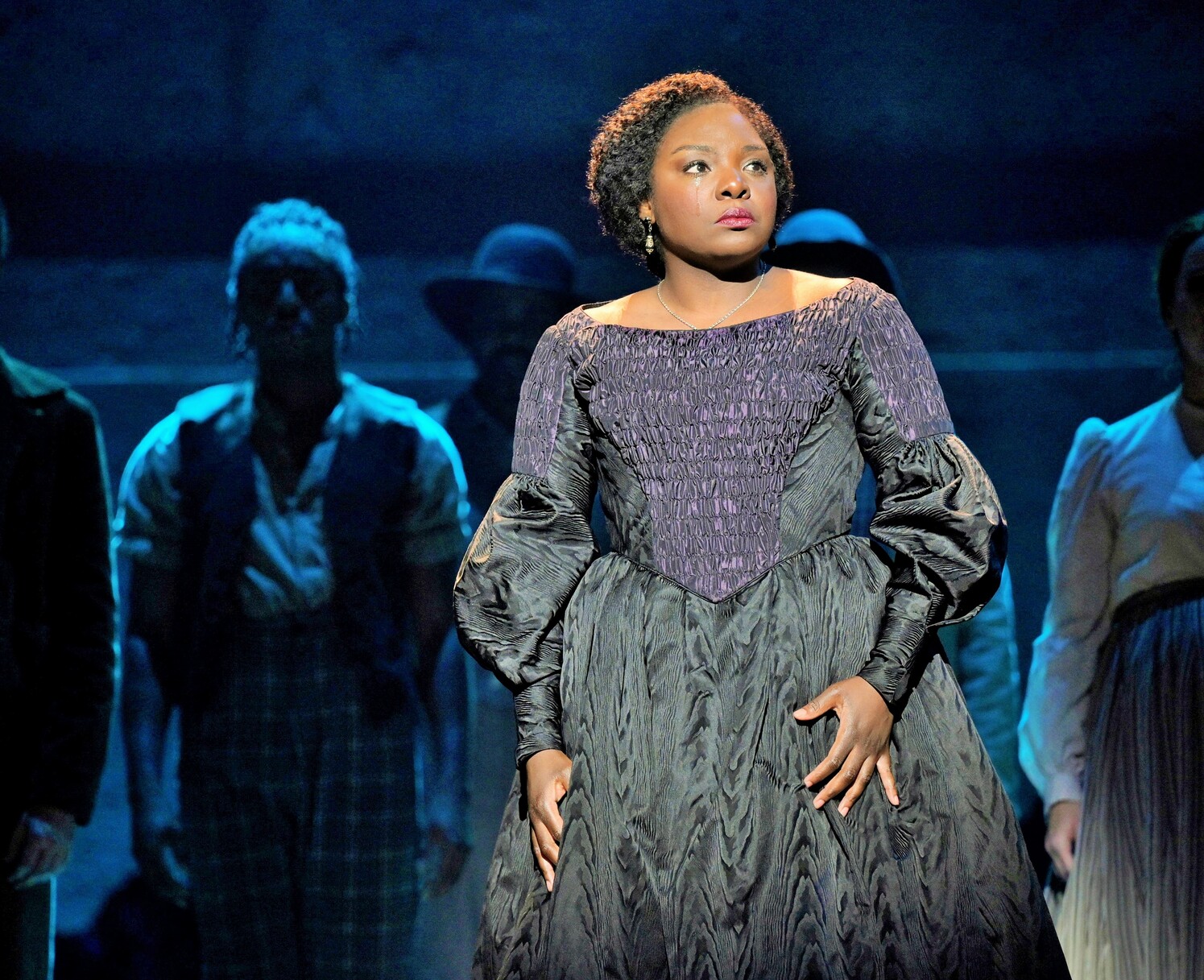 Joaquina Kalukango of "Paradise Square" was nominated for Best Leading Actress in a Musical.

Its haul of 10 nominations was one behind the leader, “A Strange Loop,” which brought home 11 and had earlier scored a Pulitzer Prize.

“MJ,” a musical about Michael Jackson, which had drawn criticism from some reviewers for downplaying the sexual-abuse allegations and concentrating on the musical side of the moonwalking former King of Pop, also scored 10 nominations.

The other three nominations battling for the top prize in the Best New Musical category included “Girl From the North Country” — which used Bob Dylan songs as the backdrop for a play revolving around a Michigan boarding house — “Mr. Saturday Night” and “Six, the Musical.”

Best New Musical is considered the money shot in the Tonys, the one which can carry a play to new financial heights with audiences.

Needless to say, Larry Kirwan, the conceiver and one of the three co-writers of “Paradise Square,” was thrilled with his basketful of nominations for the quintessential New York musical depicting a short-lived racial utopia between freed Blacks and struggling Irish immigrants in one of the city’s most notorious slums.

“I was hoping for four or five — so 10 was great,” Kirwan told The Village Sun. “I do have faith in the show, though. It’s been an audience favorite in Berkeley and Chicago before New York City, so I wasn’t totally gobsmacked, just pleasantly surprised.”

Joaquina Kalukango, who plays Nelly O’Brien, the Black widowed saloonkeeper who runs the fictional pub at the heart of the play in Paradise Square — an area which actually did sit in the heart of the Five Points — received a nomination for Best Leading Actress in a Musical. She’s up against Sharon D. Clarke in “Caroline or Change;” Carmen Cusack, “Flying Over Sunset”; Sutton Foster, “The Music Man”; and Mare Winigham, “Girl From the North Country.”

“Paradise Square” was snubbed in the Best Actor category, but that is not too surprising since Nelly’s husband, Matt Bogart, who plays Captain Willie O’Brien of the Fighting 69th, an all-Irish regiment, is killed in an offstage battle about midway through the play.

Given the interacial setting it’s probably not too surprising that Sidney DuPont, who plays runaway slave Washington Henry, received a nod for Best Featured Actor in a Musical, as did another actor form the play, A. J. Shively, who plays Irish immigrant Owen Duigan. They’re up against John-Andrew Morrison in “A Strange Loop,” as well as Matt Doyle “Company.”

Larry Kirwan, who in addition to being the conceiver and a co-author of the play was a longtime front man for the political rock group Black 47, also scored a nomination for his music, for Best Original Score, sharing the song’s music honors with Nathan Tysen with lyrics by Tyson and Masi Asare.

Kirwan had originally conceived the play as “Hard Times,” which played Off-Broadway in 2012 and 2013. About nine years ago in Toronto, he hooked up with two other co-writers Christina Anderson and Craig Lucas, who helped hammer the play into its current version. He also found a key backer in Garth Drabinsky, the Canadian producer, who was attempting to make a comeback after serving time for a felony fraud conviction in Canada for his role in the Livent scandal.

Kirwan was born in County Wexford, Ireland, and was an illegal immigrant when he first landed in New York City in the 1980s.

Irish-American politician Joe Crowley, a former congressmember from Queens who was unseated by AOC, was also among the producers backing the show when it finally made it to Broadway.

Kirwan said it is hard for him to handicap the race for the top prizes.

“I haven’t seen “A Strange Loop,” so it’s hard for me to say,” he offered. “From what I’ve read, the two shows seem very different, so it’s a clear choice. Having put so much time and effort into “Paradise Square,” I know how hard it is to get a show to Broadway, so I wish all the nominees the very best of luck — and maybe hope for a little extra dollop for “Paradise Square.””