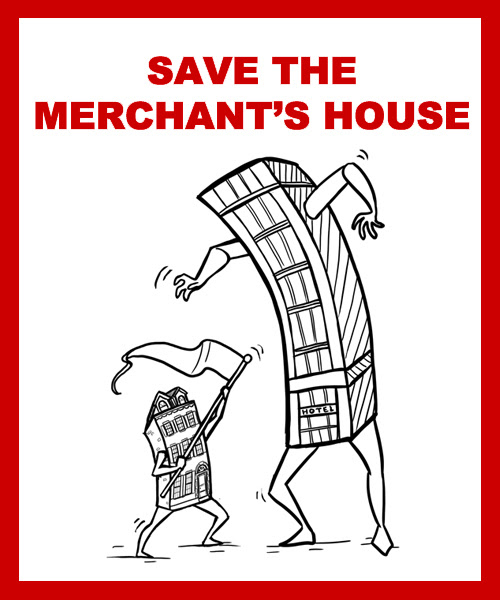 A developer wants to construct a 95-foot-tall building next to the structurally fragile Merchant's House.

Landmarks wary of project next to historic Merchant’s House

BY THE VILLAGE SUN | Updated Feb. 2, 8:10 p.m.: A developer is finding that its plan for a new building next to the historic Merchant’s House Museum is not an easy sell to the city’s Landmarks Preservation Commission.

On Tuesday, the Landmarks commissioners could have voted on the plan, either up or down. Instead they said they needed much more information and assurance that the project would not damage the fragile 1832 structure — which in 1965 was designated Manhattan’s very first landmarked building. The commissioners said they want to meet with the developer and the Parks Department, the Merchant’s House’s owner, to discuss these concerns.

Opponents direly warn that the construction, in a worst-case scenario, could cause the ancient building to collapse. The next-door project, at the least, would be “guaranteed” to cause “irreversible damage” to the museum, they say, noting that the original interior plasterwork, other interior details and flooring, along with rear and side facades, would all surely be damaged.

The Merchant’s House, at 29 E. Fourth St., between Lafayette St. and the Bowery, is one of the city’s 20 so-called “historic house museums,” many of which are located in public parks and all of which are under the ownership of the city’s Parks Department. It is a federal, state and city landmark, and one of only 120 buildings in New York City that are both an exterior landmark, as well as a rarer interior landmark.

“In short, the good news is they did not take a vote and seemed to realize that construction next door does in fact pose a serious threat of structural damage to the Merchant’s House Museum — and it must be addressed,” she said.

The developer filed a new application in December, calling for a seven-story building to be constructed on the lot just east of the museum.

At Tuesday’s Zoom hearing, Merchant’s House supporters, including engineers, historians, including architectural historians, preservation groups and members of the public, all testified against the proposed development.

However, the Merchant’s House has, in fact, been threatened for the past nine years. A previous plan called for an eight-story hotel on the adjacent site. Two years ago, the City Council rejected that plan, concerned the construction would seriously damage the museum, if not jeopardize its structural stability.

On Dec. 17, Community Board 2 voted once again against the project — the third time it has rejected the developer’s plan in its various incarnations. The board’s vote is not binding but a recommendation to Landmarks.

The project’s latest iteration, however, poses the greatest risk yet, museum officials and supporters say, due to the proposed building’s larger footprint — which extends deeper into the site — and its overall size. The 95-foot-tall building would loom over the Merchant’s House by three stories, and generally be “inappropriate for the Noho Historic District,” opponents said.

“This is a building that serves the public, that millions of dollars have been invested in,” he added. “That we would allow a project next door that would threaten it seems mind-boggling.”

On Monday, Manhattan Borough President Gale Brewer and Councilmember Carlina Rivera wrote to the L.P.C., requesting that a vote on Tuesday be postponed.

“…[W]e remain concerned about the possibility of severe damage to the neighboring Merchant’s House Museum should this application be approved,” the two politicians wrote, “especially with no substantial review of the proposal by independent engineers in conjunction with those professionals that are familiar with the museum property.

“Given the magnitude of the issues at stake, we urge the commission to obtain an independent engineering report prior to conducting a vote on the application.”

Following the filing of the application in December, no one from the developer’s design or engineering team has contacted the Merchant’s House. Museum officials are alarmed that the development team has not even made a single site visit to the Merchants House.

Were the project to get green-lighted, it would force the museum to close for at least 18 to 24 months, according to museum officials. This would be needed to safeguard and secure the museum and its collection and would cost up to an estimated $5 million, including significant lost revenue, according to the Merchant’s House.

During construction, to try to reduce damage to the building’s original 1832 plaster and other historic fabric, internal supports and protections and other preservation materials would need be installed on all four floors and throughout each room, the museum says.

Bizarrely, the developer currently has two open applications for construction on the same lot. After the City Council, in September 2018, voted unanimously to deny the application for spot-zoning for an eight-story hotel, the developer, in January 2019, sued to overturn the Council’s decision. That lawsuit is still pending.

Whereas the previous plan required Landmarks approval, plus a spot-zoning change, it’s not clear if this current version needs more than Landmarks approval. The previous plan needed a zoning change due to some use changes — including locating the dining room on a floor above the ground floor and setbacks in the street wall. Berman of Village Preservation said it’s actually not clear what use the developer is going for right now. Residential use, though, would require a zoning variance. A hotel or offices would be “as of right” uses.

Opponents note that at dozens of hearings over the past nine years on the developer’s plans for the site, there has been no shortage of naysayers, but no one has ever turned out to speak in support.

As of late afternoon on Feb. 1, a petition in opposition to the development had garnered more than 14,400 signatures, closing in on its goal of 15,000. The petition is addressed to L.P.C. Chairperson Sarah Carroll and B.P. Brewer.

People can also e-mail the Landmarks Preservation Commission at testimony@lpc.nyc.gov (subject line: 27 E 4th) to encourage them to vote no on the proposed development and save the Merchant’s House. Village Preservation has created a form e-mail that can be used.