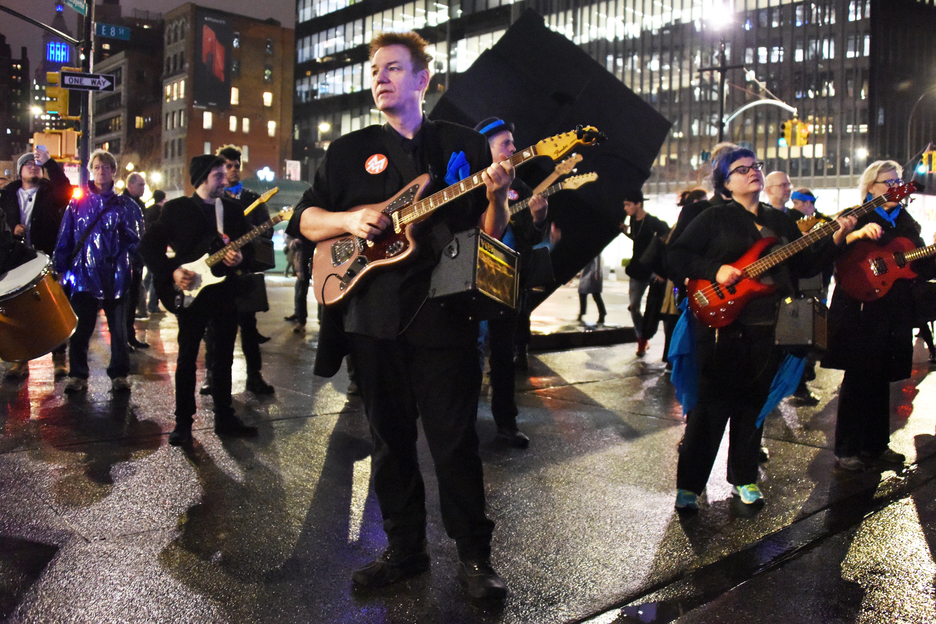 A mobile guitar performance, "Tilted Axes" will help kick off the festival on Sat., Sept. 10, with a musical march from W. 11th Street and Waverly Place to "The Cube" at Astor Place and back. (Photo by Bob Krasner)

Klezmatics, ‘Kerouac at 100,’ ‘Tilted Axes,’ Suzanne Vega and much more coming at The Village Trip festival

Mark your calendars. On second thought…you might actually want to get a bigger calendar so you have enough room to note down all these events.

The Village Trip Festival is coming back around for its fourth trip in Downtown Manhattan — and it’s shaping up to be bigger and better than ever.

This year’s festival will run from Sept. 10 to Sept. 24 and will boast its largest geographic footprint to date.

A diverse program of cultural and arts events, the two-week-long festival will span the history-laden neighborhoods of Greenwich Village, the West Village and the East Village — from Washington Square Park to Tompkins Square Park.

Festival programming will feature jazz, rock and classical music performances, local neighborhood and history walks, topical talks and panel discussions exploring critical issues, such as human rights, women’s political action and freedom of speech, as well as an exhibition of neighborhood artists, and the return of David Amram as Village Trip artist emeritus.

“Our goal is to bring the city alive — from West to East, and back again — with a rich slate of happenings that represent all that’s made Downtown Manhattan a magnet for creativity and activism for more than a century and a half,” said Liz Thomson and Cliff Pearson, the festival’s joint artistic directors.

This festival’s signature event will be a free concert in Washington Square Park featuring The Klezmatics and gospel singer Joshua Nelson, along with Reverend Billy and the Church of Stop Shopping. The open-air concert is scheduled for Saturday afternoon, Sept. 24.

“The Klezmatics are thrilled to be a part of this year’s Village Trip Festival,” said Lorin Sklamberg, a founding member of The Klezmatics. “It is especially meaningful since The Village Trip is expanding to include the East Village, whose kinetic energy was so vital to the band’s genesis in the 1980s. We are also beyond excited for the opportunity to present “Brother Moses Smote the Water,” our ecstatic collaboration with the mighty “Prince of Kosher Gospel,”
Joshua Nelson, as part of our Washington Square Park debut.”

Additional highlights will include:

• “Tilted Axes: Music for Mobile Electric Guitars”: Also on the fest’s opening day, the “Tilted Axes” procession route will begin and end at St. John’s in the Village (218 W. 11th St.). The musicians will circle Washington Square Park, proceed east to Astor Place, and then back again to the West Village, making street stops to engage the public along the way. The procession will culminate in the courtyard of St. John’s in the Village with the premiere performance of a “Tilted Axes” composition created for the 2022 Village Trip Festival. (Sat., Sept. 10, 2:30 p.m. to 4 p.m).

• “Jack Kerouac at 100”: A series of Village Trip events, honoring Kerouac’s centennial, including:

o “On the Road”: A staged reading with music, featuring selections from the generation-defining opus, directed by David Deblinger of HB Studio. (Strand Book Store)

• “Framing the Village”: An exhibition of paintings, drawings and photographs by Village artists depicting — or inspired by — the neighborhoods of the West Village, Greenwich Village and East Village. Curated by New York City artist Marc Kehoe. (Revelation Gallery, St. John’s in the Village Church)

• “Freedom of Speech in Contested Times”: A panel discussion exploring some of the parallels between the expression of social and political unrest from the past and today. (Venue to be determined)

“It’s really good news that The Village Trip is back — bigger than ever and going all the way to the East Village!” Levine said. “There’s so much amazing, eclectic culture in this community, which block-for-block has more artistic history than almost any other place in America. It’s just wonderful. I cannot wait to attend the festival.”

The Village Trip was created in 2018 to celebrate the dynamic artistic, musical and activist legacy of the West Village, East Village and Greenwich Village neighborhoods of Downtown Manhattan. The Village Trip is for New Yorkers, their families, friends and neighbors, and for visitors from around the world.

The festival kicked off in 2018 with Suzanne Vega performing in Washington Square Park. In 2019, the three-day festival featured an outdoor concert headlined by Steve Earle. Due to the pandemic in 2020, The Village Trip was canceled. For 2021, the now-nine-day festival included Bobby Sanabria and his Multiverse Big Band performing in Washington Square Park.