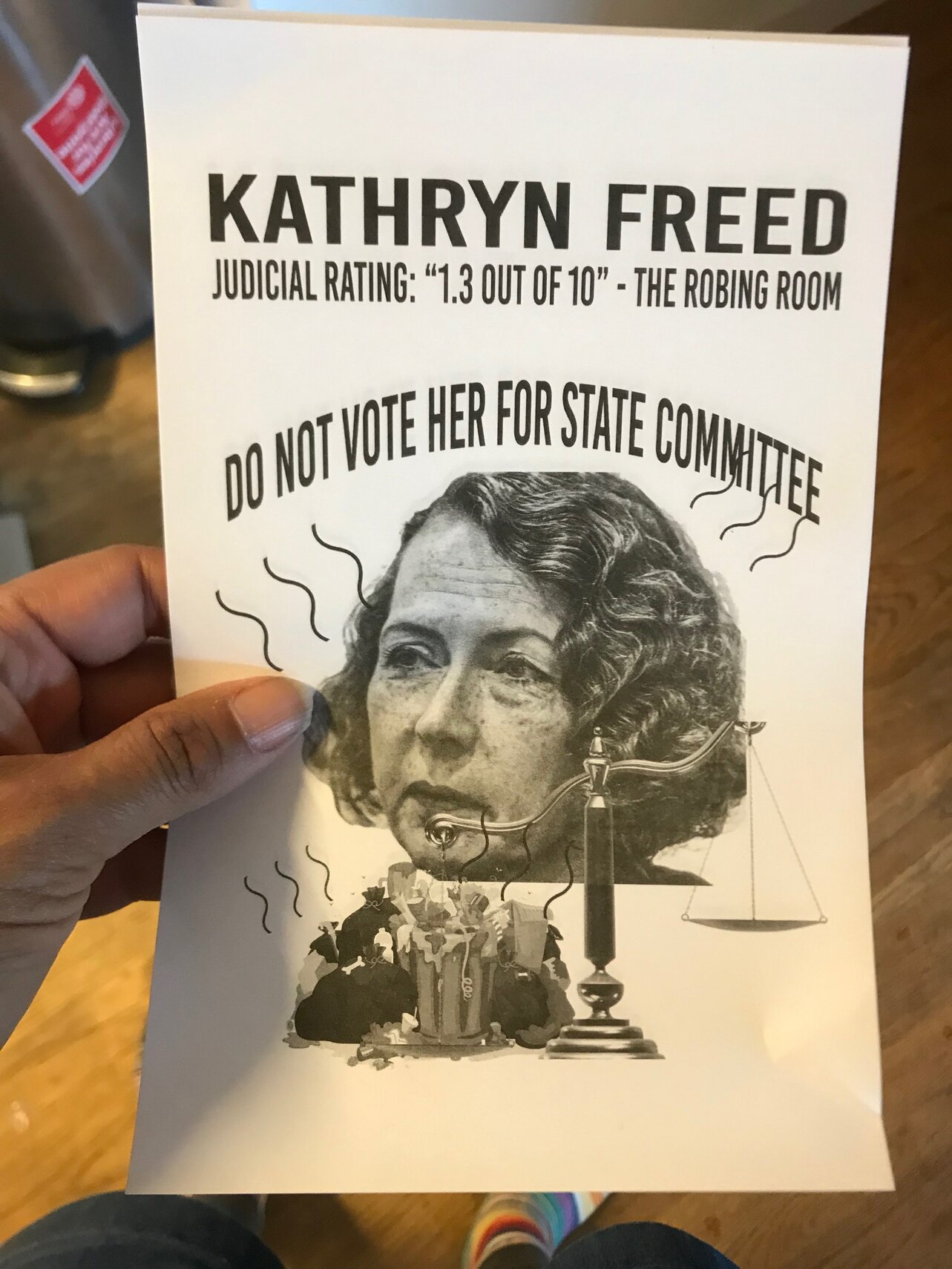 BY LINCOLN ANDERSON | What is it about Democratic primary elections in the 65th Assembly District and last-minute smear campaigns?

The hit piece cites just a handful of complaints filed against Freed that were posted on The Robing Room, a private, Yelp-like site. For good measure, the mysterious missive also features a photo of Freed unflatteringly superimposed above a pile of smelly garbage.

Coincidentally, last year when Christopher Marte was running against Low for City Council, three Democratic politicians — then-Council Speaker Corey Johnson, Congressmember Nydia Velazquez and state Senator John Liu — issued a tweet very late in the race, trying to link Marte to a contentious anti-Low poster and accusing him of running “an anti-Asian, racist smear campaign” against Low. The poster, by Youth Against Sweatshops, featured a caricature of Low with fangs and criticized her stance on the issue of fair pay and treatment for 24-hour home healthcare workers.

In addition, earlier in that race, a P.R. representative volunteering for Low had urged The Village Sun to do an article on Marte’s voting history before he entered politics, and supplied the newspaper with Marte’s voting records. However, the flack stressed, The Village Sun should not say the information came directly from a Low associate: “Say you did the research,” the rep urged. Marte admitted that he did not vote in his mid-20s, like many young people who are not yet engaged in politics.

As for Freed, she was pretty miffed by this latest, late low blow.

“Yeah, well normally I ignore this stuff,” she huffed to The Village Sun. “But this isn’t about politics — it’s against my judicial reputation. It might be [legally] actionable except it’s only by inference. It was clearly written by an attorney. … They’ve also been going after Grace [Lee],” she said, though noting that Assembly candidate Lee’s detractors are likely her campaign rivals.

“It was four complaints in 17 years. Whatever,” Freed scoffed of the Web site’s negative comments. “No wonder people hate politics and don’t want to put themselves out there,” she said, in exasperation.

As for the relatively few gripes lodged against her, Freed said, “I know who at least one of the attorneys who complained was. They were ultimately fired after five judges, including myself, filed ethical complaints against that attorney for their action in all of our courtrooms. I believe another one was an attorney who was subsequently disbarred. Just saying.”

“This is how politics are played out on the LES by some folks,” Tommy Loeb said, disapprovingly. “I can tell you I have known Kathryn for more than 30 years and this is just disgusting.”

Bill Ferns, another member of the Grand Street political club, posted a message on the Seward Park Co-ops’ pirate bulletin board, SPcomm, responding to the attack on Freed.

“The Robing Room is NOT an independent professional judicial rating panel, but merely a Web site owned by a private publishing firm,” he wrote. “On the Web site, anyone can enter their personal opinions about a judge, similar to Yelp or RateMyProfessor (which we educators call “HateMyProfessor”). It is a place where people can vent about a judge who ruled against them.

“Ms. Freed served as a judge from 2004 to 2021 at increasingly important judicial postings,” Ferns noted, “so the fact that she received only four negative responses in all that time is a testament to her judicial competence.”