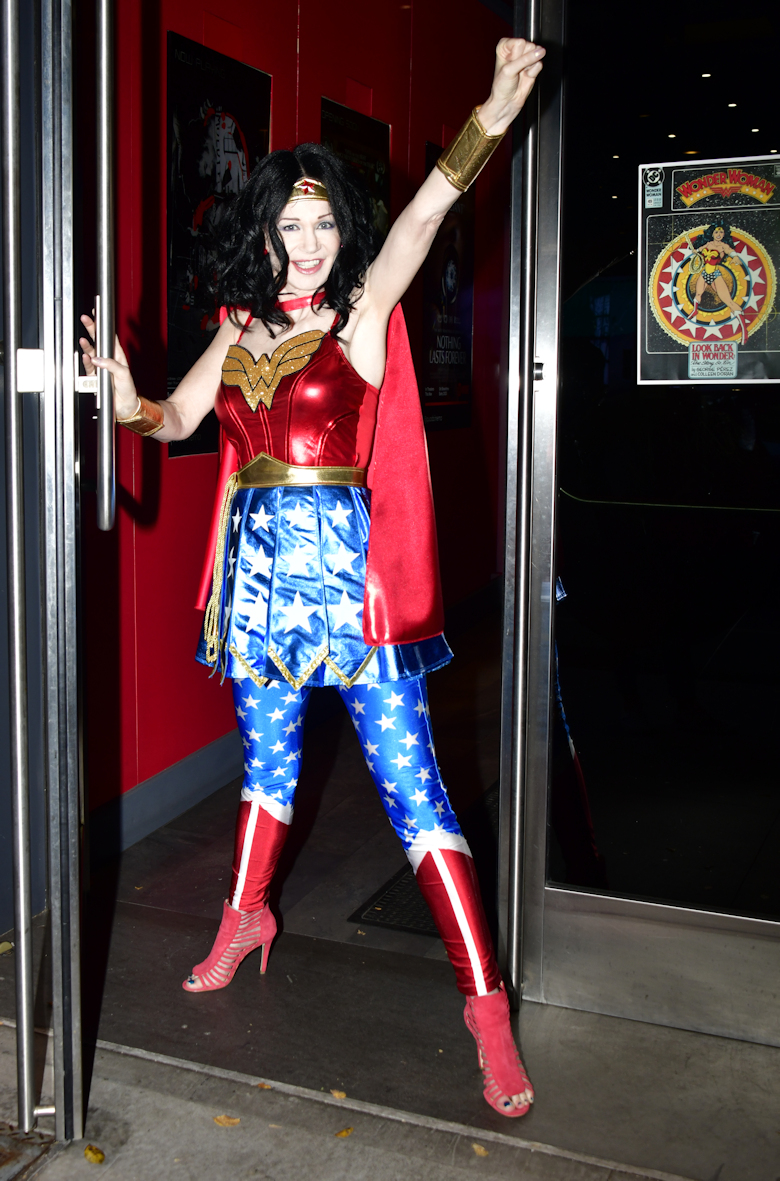 West Village Wonder Woman Karen Rempel bursts forth from the screen of Quad Cinema on W. 13th Street, eager to save the world from evildoers. (Photo by Philip Maier)

BY KAREN REMPEL | Marching through Midtown in Wonder Woman attire on my way to work at 7 a.m. on a frosty late-October morning, I was shocked by the recognition and adoration I received from my fellow worker bees. Cries of “Wonder Woman!”— sung in the tune of her ’70s TV theme song — rang against the skyscrapers.

I won best Halloween costume at work that day, and received even more recognition going home in the after-work crush on 40th Street, in the subway and striding down Sixth Avenue. From tots to pensioners, people cried out with delight, “It’s Wonder Woman!” They recognized her tiara, bracelets and boots and, of course, the golden Lasso of Truth. Even with her emblematic double-“W” symbol concealed beneath my leather jacket, the flying red cape gave her away.

Wow, that’s a lot of power to own. I like it! So I reprised the role for this month’s column to bring Wonder Woman’s message of super feminine wisdom and power to the pages of this paper. If only I had her ability to fight against evil and make people tell the truth with my golden lasso. Can you imagine? I’d spin the lasso, snag an orange Cheeto and demand the truth: “Who won the election?”

The Wonder Woman character and cartoon were created in 1941 by William Moulton Marston, with drawings by illustrator Harry G. Peter. Her viewpoints and characteristics reflect Marston’s, who was a strong supporter of feminist ideals and female empowerment. His wife, Elizabeth, and their polyamorous life partner, Olive Byrne, greatly influenced Wonder Woman’s creation and were his inspiration for the character’s appearance, including her Bracelets of Submission.

Marston was a psychologist, his wife was a scientist, and together they invented an early prototype of the lie detector. Marston theorized that human relationships could be broken down into dominance, submission, inducement and compliance, roles which were embedded into our psyche.

He thought that people are happiest when they are submitting to a loving authority. For this reason, Marston believed that women as a sex are many times better equipped to assume emotional leadership than are males. Marston wanted to convey his progressive ideals that women are not only capable of leadership roles, but should be in charge of society. Hence his Wonder Woman — invented during the early years of World War II — was a pacifist icon who used superpowers and smarts rather than violence to win the day.

While showcasing this cinematic figure — who sprang from the pages of her comic books to the television and later the silver screen — I would also like to commemorate the owner of New York’s first multiplex theater, Quad Cinema at 34 W. 13th St. Maurice Kanbar died in September at age 93. He was an inventor who held three dozen patents, including his first hit, the D-Fuzz-It Sweater & Fabric Comb.

Another of Kanbar’s creations holds an important place in Manhattan moviegoing history: When the Quad Cinema opened on Oct. 18, 1972, it was the first theater in the city to have multiple screens under one roof. That day the Quad showed three then-current movies — “Play It Again, Sam,” “Butterflies Are Free” and “Slaughterhouse-Five” — plus the 1943 musical “The Gang’s All Here.”

Recently renovated, the Quad’s spectacular theater spaces offer the intimacy and luxury of high-end private screening rooms. Plus a wonder feature if you arrive ahead of a friend who’s always late: the Quad Bar! Serving beer and wine, the Quad Bar does not provide Kanbar’s most lucrative invention, a hangover-free vodka called Skyy, which he reportedly sold to Campari Group for $207.5 million in 2001.

Though it was never actually shown at the Quad, the popular 2017 film “Wonder Woman,” starring Gal Gadot, Chris Pine and Robin Wright, is playing at Brooklyn’s Skyline Drive-In NYC on Sun., Dec. 11. Or view the original TV series featuring Lynda Carter and Lyle Waggoner on Amazon Prime and revisit a more innocent age.

Rempel is a New-York based writer. For past columns see karensquirkystyle.nyc.