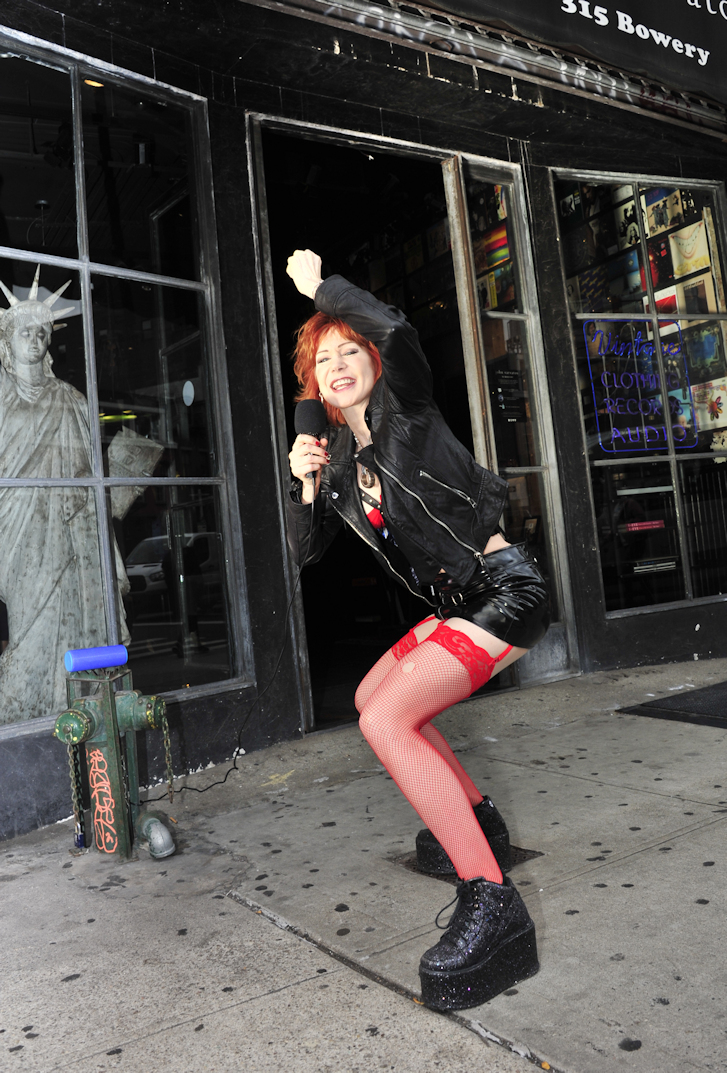 West Village model Karen Rempel sings the Sex Pistols’ “Anarchy in the U.K.” on the sidewalk in front of the former CBGB, at 315 Bowery. (Photo by Philip Maier)

BY KAREN REMPEL | I first heard about CBGB at a party in high school in Burnaby, British Columbia. My friends were playing the Talking Heads’ “Life During Wartime” and somehow I parsed the word CBGB’s, though it took decades to learn about the Mudd Club.

I’m sure all native New Yorkers know that CBGB is the birthplace of punk, though the Brits might disagree. Historians say punk began in New York City between 1974 and 1976, and in the U.K. the movement coalesced around the Sex Pistols in 1976. Other claims abound. A bartender in London told me that punk started in Peru in the ’60s. But let’s go with NYC.

Hilly Kristal opened CBGB in 1973. The awning said CBGB OMFUG, which stood for Country Bluegrass Blues and Other Music for Uplifting Gormandizers (music gluttons). Hilly gave everyone a chance. The young bands that showed up spawned a creative movement of social protest and experimentation in music: punk, new wave, glam punk and more.

The Ramones played their first gig at CBGB, and Blondie, Talking Heads, Joan Jett and the Blackhearts, New York Dolls, Television and many other musical icons launched there, too. It was a glorious time for music. Oh, how I wish I’d been there!

Luckily for me, my Uncle Dwayne was a true gormandizer, and for Christmas 1978 he gave my sister and me 10 albums, including the Eagles “Their Greatest Hits,” Blondie “Parallel Lines,” Fleetwood Mac “Rumors” and the Runaways’ “Queens of Noise.” I was 13 years old and obsessively pored over every detail of Deborah Harry’s white dress and Candies shoes, while trying to understand the lyrics of “Heart of Glass,” which was a little beyond my ken.

In honor of CBGB’s role in unleashing a musical torrent on the world, I put together a punk outfit more inspired by the Ramones (zippered biker jackets) and Wendy O. Williams (black electrical tape) than Blondie.

But when we went to do the shoot, we discovered a life-sized mural of the album cover for “Parallel Lines,” with names of its songs and a Blondie concert ticket. Do I hear photo-op! Yes, and a strange realization of that 13-year-old’s fantasies.

I never dreamed I’d be in New York one day doing a photoshoot in front of a mural of this album. At 13, I couldn’t possibly imagine what life would bring. Maybe at midlife the endless possibilities have narrowed a little, but I like to think the unknown still waits around the corner.