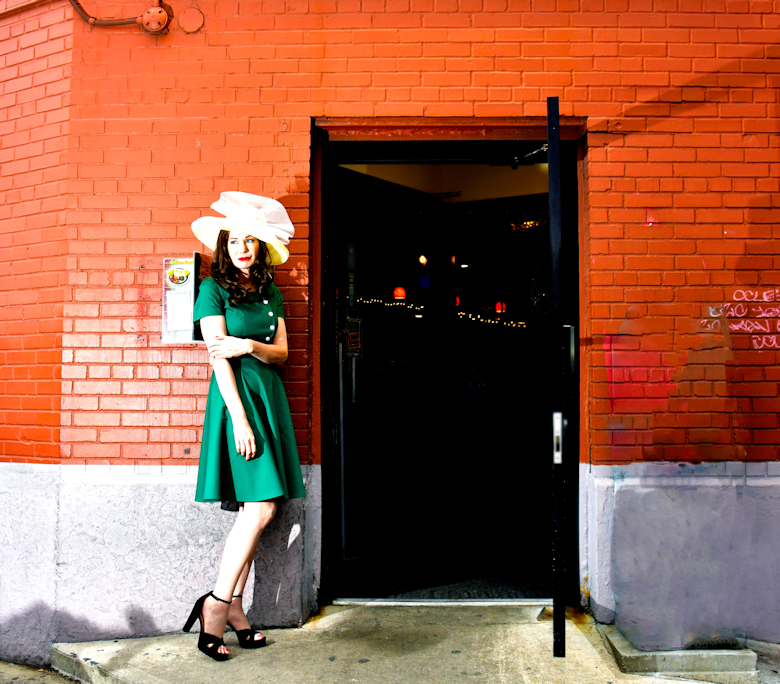 West Village model Karen Rempel is as lonely as a Hopper painting at Hector’s Cafe in the Meatpacking District. (Photo by Philip Maier)

BY KAREN REMPEL | Hector’s Cafe and Diner, at the corner of Little W. 12th and Washington Streets, has been serving meatpackers three squares a day since 1949. Open at 3 a.m., it’s always a beacon in the shadow of the High Line (formerly an elevated freight line that was built in 1929). In the predawn hours, Hector’s draws a mixed clientele of workers and partiers in the last surviving pocket of the original industrial Meatpacking District.

According to The New York Times, Hector’s is part of a small collective with seven meatpackers on Washington Street. The co-op has a deal with New York City to retain its below-market rents until 2032. This explains how a modest ’50 diner has managed to stay in business for 70 years amidst some of the priciest real estate in New York. The good news is you’ve got 10 more years to sidle up to the counter for a burger and shake or the best fish tacos in town.

Just down the street, the Whitney Museum is displaying the “Edward Hopper’s New York” exhibit (until March 5). Photographer Phil took me to the exhibit with his partner, Amy (who is also our lighting assistant), a few Saturdays ago. We were overtaken with the loneliness of being an outsider looking in that Hopper’s art evokes. Phil and I discussed how we both express this vantage point in our art, capturing hidden private moments in public and falling in love with our subjects for their humanness and vulnerability. The Hopper vibe haunted us for days afterward, and we decided to try to replicate Hopper’s alienation for this month’s shoot.

And what better location than Hector’s, which Hopper (1882-1967) likely visited during forays from his Washington Square apartment. Despite health problems, Hopper continued to paint masterworks into his seventies. I can imagine him stopping in at Hector’s sometimes after an afternoon of rambling over the cobblestone streets past slaughterhouses, garages and marine suppliers.

In the Whitney exhibit, Hopper’s work portrays an evolving city in the first half of the 20th century, and the curators provide excellent commentary on the historical changes society went through during this period. For example, from “Automat,” shown above, Amy and I learned that by 1927, women were able to dine alone safely in respectable places, such as the Automat, and some professional women had the earning power to do so.

I encourage you to see the exhibit and savor Hopper’s wrenching vision of love for New York mixed with existential despair. But if you can’t make it over to the museum, the Whitney has created an interactive map to show Edward Hopper’s New York then and now.

Rempel is a New-York based writer and artist. For past columns and also for more fantastic Philip Maier photos, see karensquirkystyle.nyc.