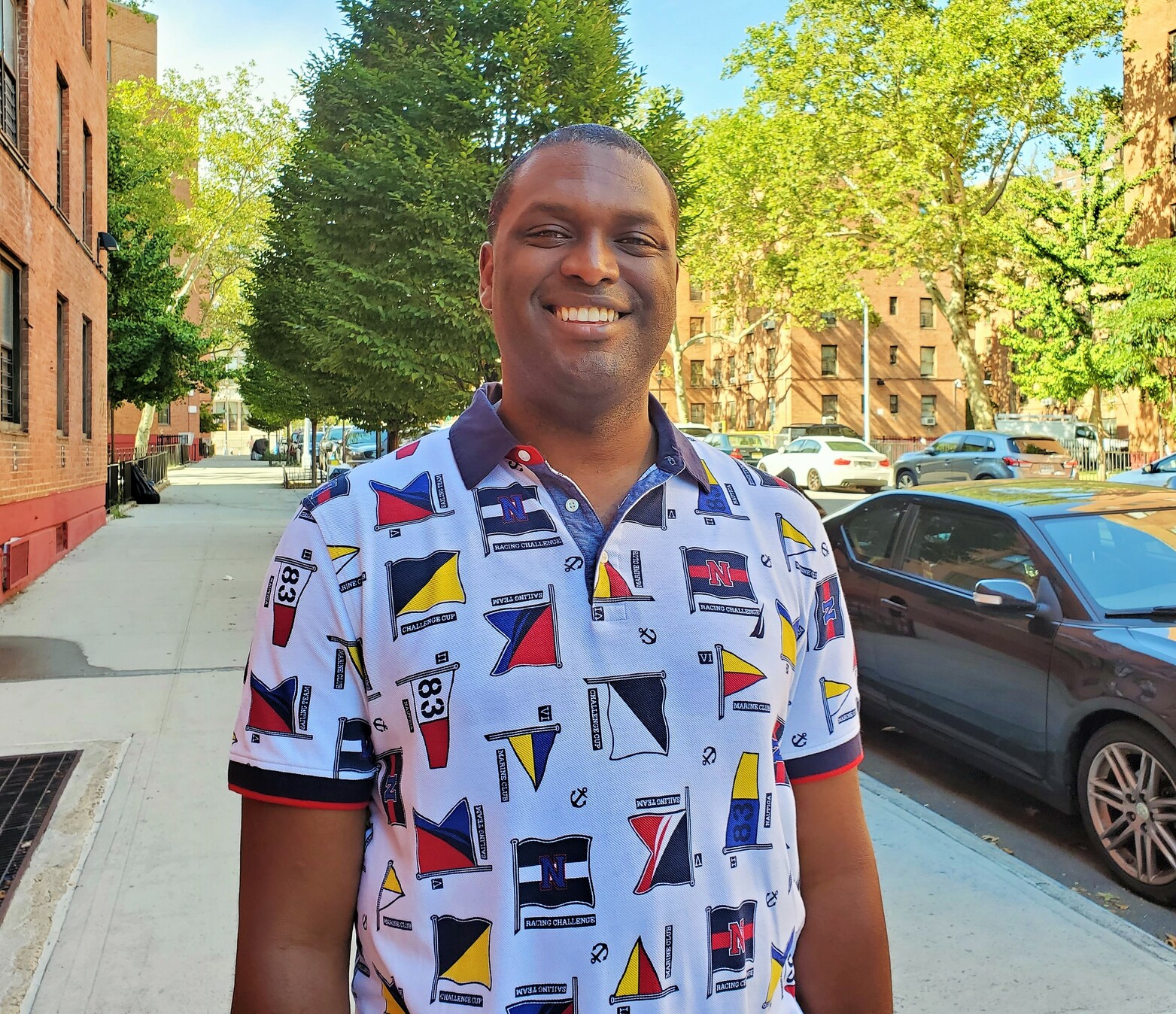 BY LINCOLN ANDERSON | Mondaire Jones visited East River Park’s clear-cut southern section last Friday, making a positive impression on a group of activists who gave him a tour of the bombed-out-looking landscape.

Afterward, Jones, who represents the 17th Congressional District in Westchester and Rockland Counties, again criticized one of his leading primary election opponents, Carlina Rivera, noting that the park’s destruction has been happening on her watch. Just days earlier, Jones slammed Rivera on East River Park during an interview with Paul DeRienzo on WBAI News.

The congressmember and the East Village city councilmember are among a crowded field of candidates fiercely vying to win the Aug. 23 Democratic primary for the 10th Congressional District, covering Manhattan south of 14th Street. The $1.45 billion East Side Coastal Resiliency project, which has already destroyed half of the nearly 50-acre East River Park, is an incendiary issue in the race.

The project is raising the park 8 feet to elevate it above the floodplain — but first, in order to do so, the entire existing park, with its nearly 1,000 trees, is being destroyed in a two-phase project. Rivera passionately supports the E.S.C.R. plan, arguing that it’s critically important to protect nearby New York City Housing Authority complexes from future Sandy-like inundations.

However, talking to The Village Sun after viewing the park, Jones said, “It is so clear when I speak to residents of the Lower East Side that they feel betrayed by Carlina Rivera. She promised that there would be community input. She went back on that. People talk about her breaking her word in the case of the big Tech Hub in Union Square. The feeling is that Carlina will say anything in front of a certain audience.”

The opponents of E.S.C.R. support other options for flood control for East River Park. An earlier design for the park project that underwent extensive community review and input was quietly dropped by Mayor de Blasio’s administration, which then abruptly unilaterally replaced it with the current “elevated park” plan. E.S.C.R. supporters argue that almost as many of the park’s trees would have been felled by both plans; the opponents disagree, saying there were different versions of the earlier plan with less tree carnage.

As for the Tech Hub, on E. 14th Street between Third and Fourth Avenues, Village Preservation said Rivera had pledged, when first running for the City Council, only to approve the site’s upzoning if other zoning protections were added for the surrounding area to the south. While the Tech Hub upzoning happened, the other rezoning never did. In her defense, Rivera indicated that, as a then-new councilperson, she lacked the clout to pull off the zoning change.

Last Friday, Jones noted that this was, in fact, not his first tour of East River Park, and that he recently visited the park’s northern end with Christine Datz-Romero, the executive director of the Lower East Side Ecology Center.

Asked for his overall take after seeing the park on Friday, he said, “It’s really a shame that there was not community input…into this project.”

On another fraught green space issue in District 10 — the Elizabeth Street Garden — Jones indicated that, for him, L.G.B.T. housing is a priority. Under the city’s Haven Green project, which is slated for the Little Italy Garden, most of the iconic outdoor space would be covered by a new affordable-housing housing project for L.G.B.T. seniors. According to the nonprofit that runs the garden, both Rivera and Jones “publicly support destroying the garden for housing.”

However, Jones told The Village Sun it’s not that simple.

“We haven’t even completed that survey,” he said of the garden’s questionaire on the candidates’ positions. “We know that members of the L.G.B.T.Q.-plus community, in particular, disproportionately experience homelessness and housing insecurity. This is something that’s personal for me as someone who is openly gay and one of the nine openly L.G.B.T.Q. members of the 435-person House of Representatives.

“Every person, regardless of who they love, how they look, how much money they have, deserves adequate, affordable housing,” Jones stressed. “And we’ve got a housing shortage in this city. And I don’t think anybody wants to be on the side of not supporting L.G.B.T.Q.-plus housing.” However, he added, “We’ll look into that survey.”

Told how Community Board 2 had identified an alternative site in Hudson Square that would support the development of five times as much affordable housing, and how the city, in turn, agreed to create housing there — yet without backing away from its development plan for Elizabeth Street Garden — Jones agreed it’s “unfortunate” to pit housing and gardens against each other.

“My support for L.G.B.T.Q.-plus senior housing is not to the exclusion of green space in New York City,” he maintained.

“We sent Mondaire the garden questionnaire back in the spring and followed up several times,” Joseph Reiver, the Elizabeth Street Garden’s executive director, told The Village Sun.

Jones said District 10 — including areas like Greenwich Village — has had an important role in his own evolution and growth. He said gay leaders who were people of color in the Village and other parts of the district have inspired him. He said he formerly worked in the area when he was an assistant law clerk for the U.S. Attorney for the Southern District of New York.

John Plenge, an East Village music teacher and musician, who met both Goldman and Jones on the tours, remarked on the differences he felt between the two candidates.

Jones, he said, “was a little more homespun and grassroots. He was genuine. When you shook his hand, you could feel it. Mondaire has a gentleness to him.” Goldman, on the other hand, asked probing questions about aspects of the E.S.C.R. project, he said: “‘Is that legal? Can you do that?’ — the legalities. He was more businesslike.”

Plenge added that when he mentioned the idea of decking over part of the F.D.R. Drive to expand East River Park’s footprint and cut down on carbon emissions, Jones promptly said, “There’s federal money for that.”

Plenge said they are trying to get another candidate, Yuh-Line Niou, to visit the park’s devastated southern section next.

“We will meet her anytime,” he said.

Meanwhile, former Councilmember Kathryn Freed and Tommy Loeb, a leading member of East River Park ACTION, who both toured the south part of East River Park the previous week with another District 10 candidate, Dan Goldman, did not go on the Jones tour. They both said they are supporting Goldman.

“It was a coin toss for me between Goldman, Jones and Simon,” Loeb said. “In my opinion, Goldman seems to have the best shot of winning.”

Freed said Goldman’s having been the House majority’s lead counsel on Trump’s first impeachment gave him the edge.

“I was prepared to like both of them,” she said of the two candidates. “Goldman reached out first. And from what I see, he has a message that speaks better to me — because I am very, very aware that our democracy is about to go over the edge. I feel badly for Mondaire, too, he was put in a terrible position [due to redistricting]. And from all indication, he was a good congressperson.”

Freed knocked the Daily News’s endorsement of former Congressmember Elizabeth Holtzman, 81, for the District 10 seat as a “cop-out.”

“There’s no downside to supporting Liz,” she said. “She was great when she was in office. But there’s something to be said for continuity: What’s the point of having someone who, after two years or four years, won’t be able to run again?”